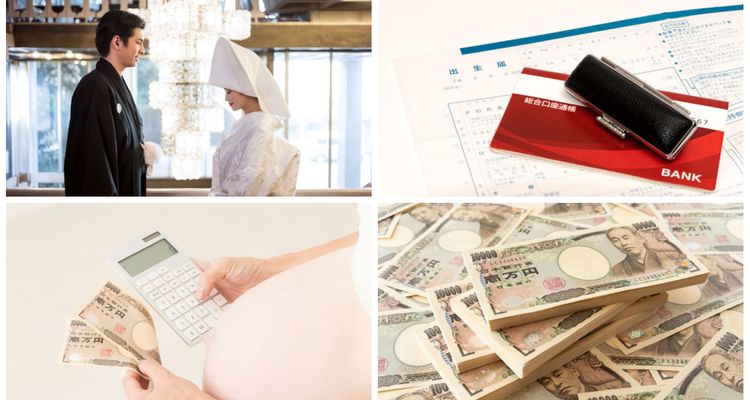 Thinking of Starting a Family in Japan? These Are the Government Benefits You Need to Know About!

For those living in Japan, it is necessary to understand the well-rounded welfare system, as it is designed to help both Japanese people and foreigners alike! Especially if you are planning on getting married or having children, there are many important benefits that are easy to receive. Read on to learn more!

In Japan, a wide range of welfare benefits and subsidies are available to everyone during almost all stages of life, from birth to death.

The low birth rate and aging population in Japan are well-known social problems. The root cause of these problems is the decision of many people to stay unmarried and childless. More and more young people are choosing not to get married, and even if they do get married, many do not want to have children. According to the Japanese National Fertility Survey conducted by the National Institute of Population and Social Security Research, the main obstacle to marriage for up to 40% of unmarried men and women aged 18 to 34 is the financial burden. As a result, many people (21.2% of the males and 15.3% of the females to be exact) simply give up on getting married. To help solve these issues, Japan has launched a series of welfare measures as follows.

In order to support marriage and childbirth among young adults, the Japanese government implemented a regional allowance scheme in 2018 in an attempt to boost the fertility rate. Couples under the age of 34 on their wedding day can receive financial support for their marriage and new life. A married couple earning below 3.4 million yen in total annually (after-tax) can receive a subsidy of up to 300,000 yen to put towards buying or renting a house and the moving expenses incurred. Even people who are remarrying are eligible to apply as long as they have not received the benefit before.

Another point worth mentioning is that the marriage and new life support welfare system is not yet available throughout Japan. So far, the system has only been implemented in 257 of the 1,724 cities in Japan. For more details, please consult the governmental institution in your area.

When one or both spouses are infertile or it is difficult for them to get pregnant, treatment such as in vitro fertilization and micro fertilization may be required. In such cases, the government will issue an additional subsidy of 150,000 yen, which can be received twice per year, since health insurance does not cover these procedures in Japan.

The duration of Japan’s paid maternity leave is 98 days, which includes the 6 weeks before and 8 weeks after childbirth. If the new mother's company does not pay for her salary turning this time off, she can apply for a subsidy from the government and receive about two-thirds of her salary. If the company pays some, but less than the required amount, the government will make up for the shortfall.

After maternity leave, new parents can continue to take childcare leave. From the time her maternity leave ends until the infant's first birthday, stay-at-home mothers can get a monthly subsidy from employment insurance equal to 67% of her salary for the first 180 days, and 50% of her salary for the remainder of the leave. Stay-at-home fathers can also apply for 50% of their original income under this system. For example, a father earning about 8,000 yen a day can get a subsidy of about 1.2 million yen if he takes a 10-month leave. Those with higher wages can receive up to a cap of 215,000 yen per month.

In addition, the Japanese government pays a monthly child care allowance to families with children under the age of 12, as long as the yearly household income is below a threshold (starting at around 8 million yen for families with no other dependents). The monthly amount paid per child is as follows:

1. Are enrolled in a health insurance plan from either the government or an employer.

2. Are pregnant for more than 85 days (even if the pregnancy ends with miscarriage, premature delivery, stillbirth, or elective abortion)

The grant can be transferred directly to the hospital to cover the costs upfront, or it can be transferred to an account for reimbursement after approval of the application. For those enrolled in an employer-provided health insurance plan, the amount of the subsidy may be even greater.

Certain parts of Japan offer further incentives for their residents to have children. These are usually cash incentives, with amounts ranging from tens of thousands to one million yen, depending on the region. As an example, Fukushima-cho in Hokkaido pays its residents a subsidy of 50,000 yen for their 1st child, 200,000 yen for a 2nd child, and 1 million yen for a 3rd child. In this case, 30% of the received amount comes in the form of gift coupons that can only be used locally. It is a good idea to check with your local government to see if it offers any such incentive.

In addition to the benefits listed above, there are other subsidies for children raised in single-parent families. Different levels of monthly grants ranging from 40,000 to 60,000 yen are available for the firstborn, second child, and third child under the age of 18. In other words, those raising children by themselves in Japan do not need to worry too much about financial issues.

Apart from the general monthly allowance listed above, school-age children from low-income families can also apply for school and life assistance subsidies to reduce tuition and miscellaneous fees. In addition, families with disabled children can receive a special dependent allowance of 33,800 yen a month for mild disabilities or 50,750 yen a month for more severe disabilities.

Bonus: A Reward For Playing Matchmaker?

On an aside, some rural places in Japan have implemented an interesting system of “matchmaker remuneration.” These days, most young people are not willing to live in rural areas or places far away from a metropolis. Upon reaching the age of independence, many young people choose to leave their hometowns for the city, which directly results in imbalanced population distribution in Japan and the diminishing of regional rural industries. In rural areas with a declining population, it is not easy to introduce single men and women who are looking to get married, hence some towns offering compensation for matchmakers ranging from 50,000 to 200,000 yen.

Take Kosuge Village in Yamanashi Prefecture near Okutama, Tokyo as an example. It is located at the source of the Tama River and is surrounded by mountains. In this mountain village with an altitude similar to that of Tokyo Skytree, matchmakers who successfully match a young villager with a partner in marriage are entitled to receive a 200,000 yen reward from the government, under the conditions that the couple intends to stay in the village permanently. In other words, getting that reward might not be as easy as you think!