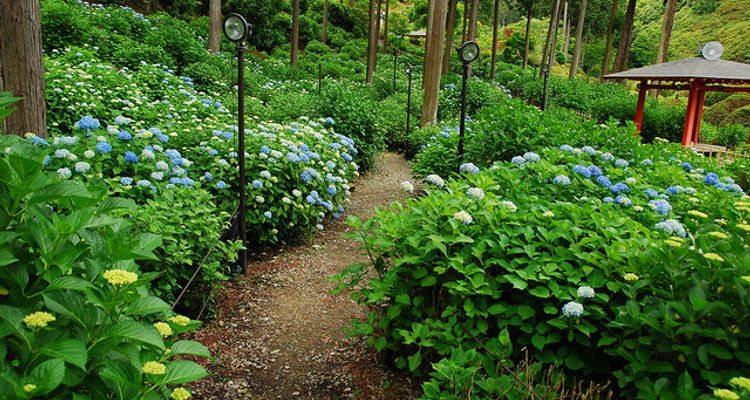 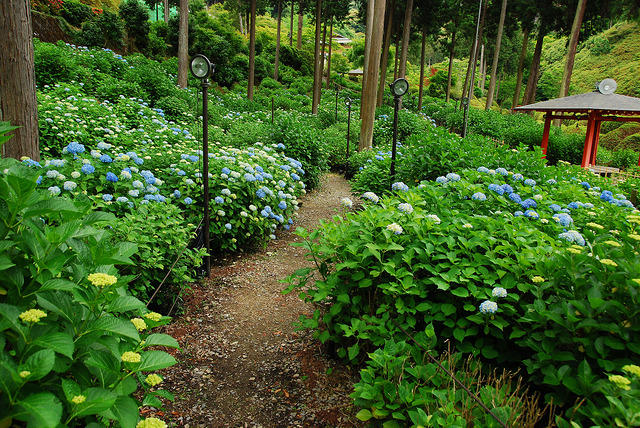 While there are many areas where you can see cherry blossoms bloom all throughout Japan, but there are also plenty of places to see other kinds of flowers too! Here are some flowers that have been beloved since ancient times in western Japan, especially Kyoto and Nara! Since lotuses are closely connected with Buddhism, they've been cultivated in Japan since ancient times. It's said that pure, beautiful flower growing in the mud is a symbol of knowledge and kindness. Kyoto's Houkongo-in was built in 1130. This temple holds various Buddha statues that have been designated national cultural assets. The garden was built at the end of the 12th century, and the waterfall in the middle of the lake holds the title of Japan's oldest man-made waterfall. Houkongo-in is also known as "the lotus temple." Entrance fee is 500 yen for adults.

2. Enjoy the hydrangea at Mimuroto-ji [Kyoto] Hydrangeas are a flower native to Japan and they've been cultivated since ancient times. They bloom during the rainy season from May to June. They come in various colors including white, blue, pink, purple, and more, so they go well with the rainy scenery. In Kyoto, Mimuroto-ji is an old temple that was said to be built in 770. The 15,000 square meter garden has 50 varieties totaling 10,000 flowers that bloom in June. Entrance fee is 500 yen for adults.

3. Hasedera, also known as "the temple of flowers" offers tree peonies to be proud of! [Nara] Hasedera is a temple with about 1000 years of history built in one of Japan's former capitals, Nara. The main temple, built in a sheer precipice, and the five-story pagoda are both designated as national treasures. Many flowers bloom at Hasedera including tree peonies, hydrangeas, cherry blossoms, and more, so it's often called "the temple of flowers." The peonies are especially beautiful. Peonies are flowers that were barred from being seen by people who weren't nobles or other high-class people, but in recently years it's become a flower that everyone could enjoy. Admission is 500 yen for adults.

4. See white cherry blossoms different from those you're used to at Mt. Yoshino! [Nara] Nanohana (rape blossoms) are a yellow flower that grows naturally in the Japanese countryside so it's very familiar to Japanese people. At Awaji Hana Sajiki in Awaji Island, one prefecture over from Osaka, the fields become swathed in yellow from March to April. Around the same time the Chinese violet cress blooms as well so the contrast between the yellow and the purple make for a beautiful sight. You can enjoy the sight of the flowers from the wooden observation deck. Free admission. Japanese irises are a flower that have been cultivated in every area to improve the visuals of the landscaping. The petals are mostly purple but they have touches of blue, yellow, and white, so they have a very refreshing image. The Banshuu Yamasaki Hanashobu-en in Shiso, Hyogo, is a garden that uses the land's natural terrain. In May, the 6 hectares of land become covered in the blooms of 1,000,000 Japanese irises. Admission fee is 800 yen.

Wisteria is a flower beloved in Japan since ancient years. The flowers are intertwined on a trellis, and in April the flowers, longer than 50 centimeters, bloom downwards. The light purple color of the flowers in other contexts (such as clothing or paintings) is called "wisteria" throughout Japan. The fragrance of the flowers is strong, so even if you don't see the flowers yet you'll know you're nearing them just by their smell. Kawachi Fuji-en is in Kitakyushu, in Fukuoka, and there 22 varieties of wisteria bloom over 10,000 square meters of land. The huge wisteria trellis and the wisteria tunnel are must-see sights. It's best to see them from the end of April to the beginning of May. Wisteria have been used as motifs in Japanese art and literature since ancient times, so you can see them in person and experience Japanese beauty first-hand. Entrance fee is 300 yen, but depending on the blooms the price may change. Mifuneyama Garden is a place to see a lot of different flowers beloved by Japan, including azaleas, cherry blossoms, and wisteria. They have more than 200,000 kinds of azaleas, including some varieties that you can't see elsewhere. The best time to see them is the month between early March and mid-April. The entrance fee is 400 yen for adults.

Rhododendrons are a type of azalea that grows in mountains, and they bloom a lovely pink color. When they blooms, the mountain becomes bathed in pink. Sensui Ravine is a ravine that runs through Mt. Aso, one of Kyushu's volcanoes, and was made by lava. In May, the rhododendrons bloom and paint the side of the mountain all one color. It's said that the beauty of these flowers entranced mountain dwellers so much they named the ravine "sensui" with the characters for "wizard" and "spellbound." Free admission.

There are many places where you can see Japanese flowers in western Japan. Definitely visit some of these areas!