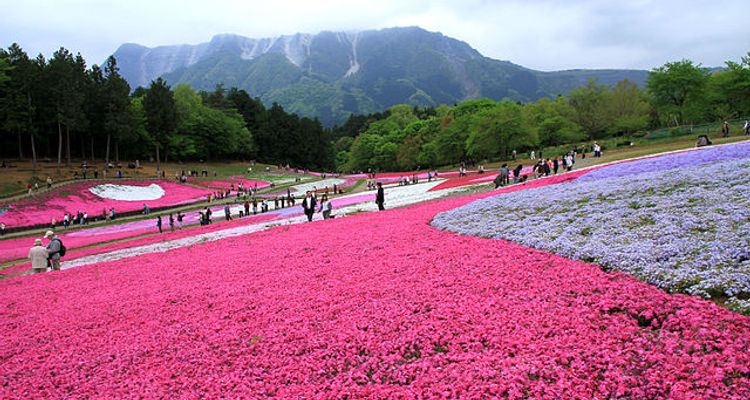 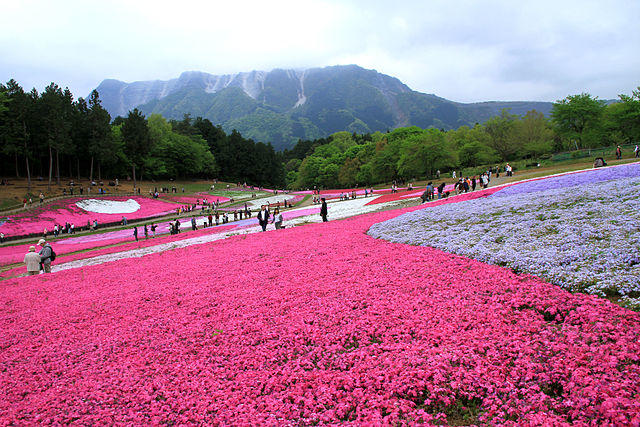 In 1979, local farmers went to Europe on a research trip, and when they saw a sunflower field they decided to cultivate it in Japan as a health food. It was originally started to harvest sunflower oil, but now it's mostly a sightseeing spot. There are about 1,500,000 sunflowers over 23 hectares of land, and they bloom from July to August. Free admission. The area of Furano is full of lavender, so when they bloom the town is full of the sweet fragrance. In 1903, the Tomita family moved to Furano. They began cultivating lavender on their farm in 1958. In 1990, their lavender oil won first place at a French lavender oil fair. It's now famous as a sightseeing spot, and they have a lot of other fields of flowers so the sight of the different colored flowers is beautiful. The lavender blooms from June to August, but the best time to see them is July. Starting in 1935, local farmers put in many years to cultivate flowering trees for sale. The beauty of the trees brought visitors, and with the wish that thousands of people could see the beauty of the flowers in their natural state, the field opened to the public in 1959. There are many kinds of flowers including plum, cherry blossom, lily magnolia, and peach, but they all bloom in April. Free admission.

Wisteria is a flower beloved by Japanese people since ancient times, and there are poems from 1500 years ago where wisteria are a topic. At Ashikaga Flower Park, there is a large number of flowers including wisteria that grow over a 94,000 square meters of land. There are two kinds of wisteria trees, purple and white, and the white wisteria create a tunnel 80 meters long. They bloom from April to May, but the best time to see them is early May. Entrance fee is 300-1200 yen for adults (the fee changes depending on the flowers' blooming status). Ozegahara is an area of wetlands that sits on the borders of Fukushima, Niigata, and Gunma. It's one of Japan's hidden areas as it's surrounded by mountains that surpass heights of 2000 meters. It's 8690 hectares wide, 6 km north-south and 3km east-west. Mizubasho (Asian skunk cabbage) is a plant that grows in wetlands, and the mizubasho in Ozegahara are so lovely that the two have become linked. They bloom from May through June. If you're coming from Tokyo on a day trip, you would pass through Gunma. If you want to see the villages in the secluded ravine and stay the night, then you should come in from Fukushima. If you want to go to Ozegahara by passing through a dam lake by boat, then you would come in from Niigata. There's no entrance fee but since you have to get out of your car and walk through the mountains that surround Ozegahara, it's recommended that first-timers should hire a guide.

6. Hitsujiyama Park: One of the foremost areas of mass phlox in Japan [Saitama]

Hitsujiyama Park is relatively close to Tokyo, and it's famous for its beautiful phlox fields. The colorful flowers are cultivated based on a design. There are about 17,600 hectares of land that has 9 variations of flowers that number around 400,000 plants. The flowers bloom from mid-April to the beginning of May. Entrance fee is 300 yen. Kominato Railway is a small railroad company east of Tokyo in Chiba Prefecture. It runs about 39km of track between short mountains, and in March it becomes surrounded with nanohana (rape blossoms). It's a quiet scene away from the hustle and bustle of the city.

8. Nezu Shrine: Azaleas, a flower since the ancient times [Tokyo] Azaleas are a flowering bush that grow all over Asia, and their flowers come in various colors including red and white. In Japan they've grown since ancient times, and they are mentioned in tanka (fixed form poetry) that are said to be written more than 1300 years ago. Nezu Shrine is near the Ueno area in Tokyo, and on the grounds there is an azalea garden of close to 72,000 square feet that holds 100 varieties of azalea numbering 3000 plants. There's also a tea house where you can drink amazake, a plant nursery, street stalls, and more. The best time to see them is from mid-late April, but since they have a ton of varieties the blooming time varies. There are some bushes that bloom early and some that bloom late, so you can enjoy the azalea over a long period of time. Free admission. Hydrangeas are flowers that bloom in June, and they're a flower that comes in a many colors including pink, white, sky blue, and purple. Also, the flowers can change color over time. They're a flower that have been beloved in Japan since ancient times. In Kamakura, near Tokyo, there are many temples where the hydrangeas are a sight to behold. Jojuin Temple, built in 1219, is is a particularly popular spot to see hydrangeas thanks to its road leading up to the temple that is surrounded by hydrangeas on either side and has a view of Yuigahama Beach. Because the road is under construction until 2017, you currently can't see the hydrangea bushes. However, you can fully enjoy the hydrangeas at Meigetsu-in and Hasedera, both in Kamakura. Both of them have free admission. Apricot is a type of tree similar to plum and cherry, so in the spring flowers bloom and then turn into fruit before summer. A forest in Nagano's Chikuma-shi has a gentle slope that goes from 380-450m that is an apricot field. The flowers bloom in April, and the entire field becomes so full of flowers that it's said you can see 10,000 trees in one glance. Every year about 20,000 people visit this field, and in 2013 the emperor and empress visited as well. It's said that in the 17th century, the princess from Shikoku that was marrying the daimyo (feudal lord) in this area brought an apricot seedling with her and it grew into this forest. Free admission. Yamanashi is Japan's biggest producer of peaches. In that prefecture, Fuefuki-shi has a field with 30,000 trees and the entire field becomes deep pink between mid-March to mid-April when the flowers bloom. Locals say that it looks like a pink carpet has been laid down over the ground. There are other kinds of flowers that bloom in the area as well, so the changes in color is a sight to see.

12. The freesia on Hachijo-jima: The address is in Tokyo but it's actually in the middle of the Pacific Ocean!  [Tokyo] Hachijo-jima is an island about 300 km south of Tokyo in the center of the Pacific Ocean, and you can reach it from Tokyo by plane or boat. It's a relatively warm island and from March to April 350,000 freesia plants bloom. The freesia come in many colors including yellow, white, pink, purple, and red, so the entire scenery around Mt. Hachijo-fuji becomes covered in flowers. Admission is free. On Hachijo-jima you can enjoy many marine sports like scuba diving and the seafood dishes prepared by local fishermen is delicious.

All of these spots have other sightseeing areas to enjoy, so you can make an entire trip out of going to see the flowers!