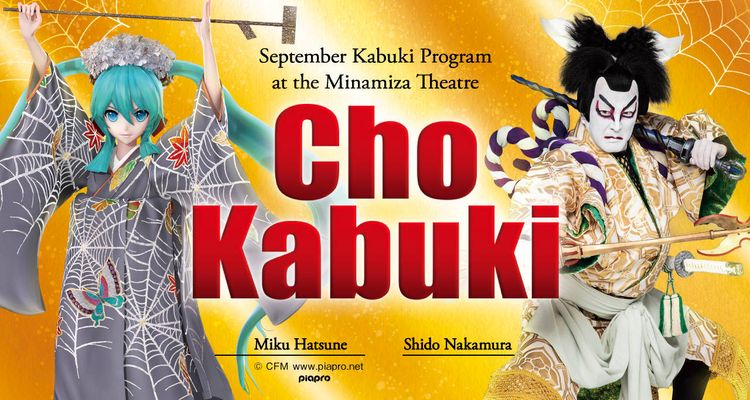 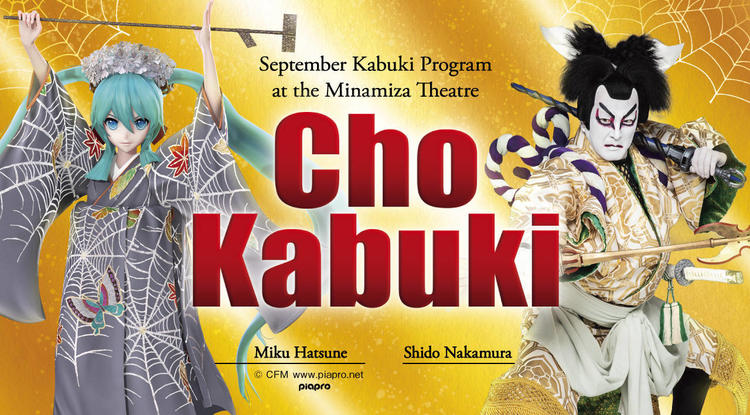 Japan’s traditional kabuki theater and the world-famous anime icon Hatsune Miku join forces to bring the one-of-a-kind show Cho Kabuki overseas! This September, be prepared for high-class kabuki performances, sensational stage effects, and the excitement of anime culture with an epic streaming event from Minamiza Theatre, Kyoto’s historic kabuki theater. If you love both traditional Japan and Japanese pop culture, Cho Kabuki is the perfect occasion to enjoy the best of both worlds from the comfort of your home while you wait to visit Japan again!

What Is Kabuki - Traditional Japanese Theater?

Kabuki is a traditional form of Japanese drama. With over 400 years of history and a unique heritage consisting of highly stylized songs, dances, exaggerated gestures and body movements, as well as superb costumes and striking makeup, it is an incredibly distinctive form of art that makes a deep impression on the imagination.

It is so universally renowned for its high cultural value that it was designated as a UNESCO Intangible Cultural Heritage in 2005 and hasn’t stopped expanding its fan base of international enthusiasts since!

What Is Cho Kabuki? Why You Shouldn’t Miss This Show

Cho Kabuki represents the fusion of traditional kabuki with modern elements such as the cutting-edge Vocaloid star, Hatsune Miku. By pairing modern pop culture and technology such as manga and anime with refined traditional kabuki's acting and directing techniques, Cho Kabuki attempts to create a completely new and revolutionary kabuki experience.

The secret that makes this fusion possible is the extraordinary technology supplied by NTT, one of Japan's biggest telecommunications companies. The ultra-realistic immersive telepresence technology Kirari uses ICT technology to collect and process information and produce a real-time synchronized transmission. By taking the movements of a real person acting out a scene, the system can apply these movements to a 3D frame and create a 3D CG character. Combine this with another of NTT's cutting-edge technologies, a double-sided transparent multilayer aerial-image display device, and magic is born!

This allows Hatsune Miku to do things like actually appear on the stage and interact with physical objects and the other actors around her.

When you hear the words "virtual idol" and "kabuki" in the same sentence, you might be already aware that Cho Kabuki is not your usual kabuki experience! But there's one more remarkable aspect to this unique show that makes it even more exciting! The sense of interaction between the actors, the cutting-edge stage, and the audience which you don't get to enjoy in normal and more restrained kabuki.

Every year the show gets better as the producers try more and more new things, aided by NTT. So, this then begs the question: how will the audience be surprised this time at Minamiza Theatre?

This September’s Cho Kabuki program will start with a short movie introducing the charms of Cho Kabuki to the audience, setting the atmosphere for a magical show that both kabuki veterans and first-timers alike will enjoy. This will be followed by the exciting new dance production, MIYAKOZOME KABUKI NO IRODORI. Performed for the first time ever at the Minamiza Theatre, it will undoubtedly leave audiences warmed up for the following performance of OTOGIZŌSHI KOI NO SUGATAE. This innovative kabuki play will charm overseas viewers by entwining classical kabuki elements, such as exquisite traditional costumes and elaborate makeup, with cutting-edge Japanese technology!

OTOGIZŌSHI KOI NO SUGATAE is based on the legend of the Tsuchigumo, a giant and monstrous spider defeated by the famous 10th-century general Minamoto no Yorimitsu. The story is centered around the love story between Yorimitsu and his beloved fiance, the beautiful courtesan Nanaaya Dayu played by Hatsune Miku. After Yorimitsu’s chief retainer Yasumasa Hirai kills the dangerous Jorogumo spider monster, a vengeful spirit called Yamanba Ibaraki Baba seeks to bring it back to life and places a curse on Nanaaya Dayu. In order to save Japan from being turned into a demon world, Yorimitsu, Hirai, and Hirai’s troublemaker younger brother Hakamadare Yasusuke must battle to defeat the monsters. Will they be able to stop the monsters and save the cursed Nanaaya Dayu?

Upon watching this unique kabuki performance, you are bound to soak in the ambiance of an ancient Japan populated by magic, curses, monsters, and even the story of forbidden love. The show vividly comes to life thanks to the acting skills of one of today’s most popular kabuki stars, Nakamura Shidō, and the bubbly contribution of Hatsune Miku and her songs, as well as acrobats and dancers. You will definitely find your eyes glued to the screen!

Follow the dynamic narration that makes the best out of a mix of action scenes, dramatic moments, and traditional dance sections while being amazed by how technology adds flavor to the story! Forget your usual boring, static theater backdrops and instead enjoy a whole world of enchanting animated backgrounds that enhance the epic aura of the play through ever-changing projections!

About the Cast of This Year's Cho Kabuki

Since making his kabuki debut at the tender age of eight, he has starred in a wide variety of kabuki plays, movies, and TV dramas. He received international fame in 2004 after starring in the romance movie “Ima, Ai ni Yukimasu (Be With You).”

The world’s biggest virtual diva. Developed by Crypton Future Media, Inc.as a Vocaloid software voicebank, Hatsune Miku has since her debut in 2007 attracted a devoted fandom, performing live concerts and even having a line of merchandise. With all sorts of events and promotions around the world, Hatsune Miku has grown into a global phenomenon.

Has over 20 years of experience in kabuki theatre and is especially known for his onnagata (male actors who play female roles) performances. He shot up in popularity after starring in the modern kabuki play “Furu Amerika Ni Sode Ha Nurasaji.”

He started performing on stage and in films from the age of nine and made his kabuki debut just a year later. For his commendable performance skills, he received the Japan Actors’ Association Encouragement Award in 2012. He is an incredibly flexible performer who is able to play both tachiyaku (young adult male roles) and onnagata roles with ease.

How Can I Watch Cho Kabuki If I Live Overseas?

Overseas viewers can enjoy Cho Kabuki on the streaming platform ZAIKO. The stream is a high-quality recording of the actual performance that took place at Kyoto’s Minamiza Theatre on September 12, 2021. It will be available for streaming from September 20 at 12:00 pm (JST) to September 26 at 11:59 pm (JST), 2021.

Worried that you might not be able to understand Cho Kabuki since it is in Japanese? Fret not! The video stream has English subtitles, so you can just comfortably sit on your couch and enjoy the show!

*Please check the website for further information about ZAIKO’s policies and technical requirements.

Where Can I Buy Cho Kabuki Tickets?

Cho Kabuki streaming tickets are available on ZAIKO starting August 12 at 12:00 pm (JST) until September 25 at 8:00 pm (JST). Get yours for the opportunity to witness a performance like you’ve never seen before!