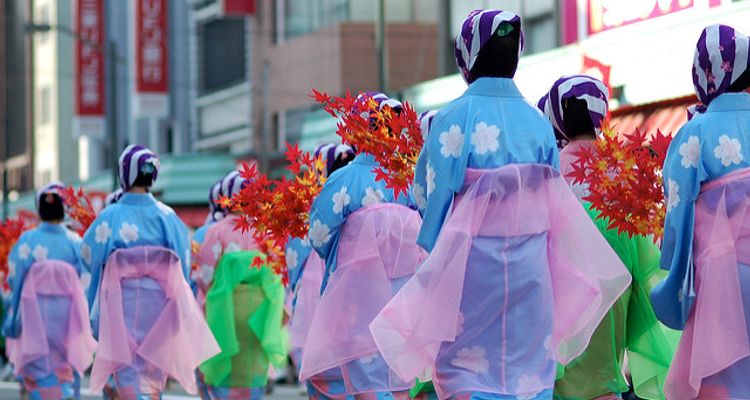 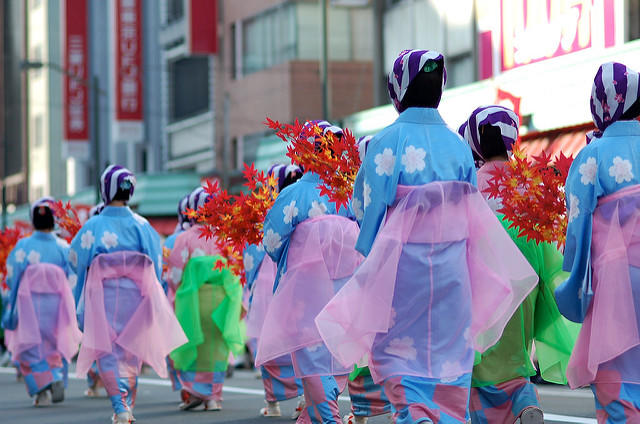 A fashion show of historical clothing in Kyoto

The annual Jidai Matsuri is one of the three biggest festivals held in Kyoto. It features a parade made up of different historical costumes.

Japan has many festivals that often portray its rich culture and history. While many specifically represent one era, the Jidai Matsuri showcases some of the most important eras in Japan, spanning approximately 1,200 years during which Kyoto was the capital of the country. Jidai Matsuri (Festival of the Eras) is held annually on October 22nd, which also coincides with the anniversary of Kyoto's founding. The festival was first introduced in 1895 to celebrate the city’s history and culture. That same year, Heian Shrine, the shrine that organizes the festival, was opened. Some of the most important activities during this magnificent festival are the Jidai Gyoretsu (historical pageant) and a parade which ends with two portable shrines known as mikoshi. The parade consists of more than 2,000 people dressed in costumes representing the different eras in Kyoto as well as some horses and oxen. It looks just like a fashion show that brings you back to a few hundred years ago.

The parade begins at Kyoto Gosho, the Imperial Palace, at about noon and arrives at Heian Jingu Shrine at about 3pm, covering a path that stretches about 5 km. The parade is not only finely divided into different historical eras but also separated into about 20 different themes. The clothes have been meticulously recreated and serve as a history lesson as well as being beautiful to look at. The colors of the costumes are stunning and faithful to their respective periods. Not only are the clothes faithful to the times they represented but the footwear and even the hairstyles are reproduced to great effect. And it is certainly not just about historical fashion; you will also see a wide range of traditional Japanese deadly weapons.

The procession begins with different important characters from the Meiji Restoration era (1868-1912) and continues in reverse chronological order until the Heian Era (794-1185). At the very head of the parade there are the festival's honorary commissioners, riding in horse drawn carriages in the style of the mid 1800s. The commissioners include figures like the governor of Kyoto Prefecture, the mayor of Kyoto City and the city council chairman. Following them are figures of the Meiji Restoration. There is a marching band with drums and flutes and soldiers who would have fought with the imperial forces, as well as some of the era's most notable figures, such as Sakamoto Ryoma. The largest group in the parade depicts the extravagant convoys sent by the shogun to represent him at important imperial ceremonies in Kyoto during the Edo Period (1603-1867). The three most important officials ride on horseback, and there is also a palanquin carried by attendants that the officials would use when traveling. Afterwards there is a much smaller group that consists of about a half dozen famous women from the period, including a princess sitting on a wheeled platform. As the parade continues, spectators are able to see the armor of Oda Nobunaga and his commanders, the dress of warriors and common people of the Muromachi Period (1338-1573), more famous historical women and nobles of the Heian Period (794-1185). The costumes and characters of the military, cultural, aristocratic and common people are all put on display. The very last group of the parade is the most important in terms of Shinto rituals. A large number of attendants accompany and carry two mikoshi (portable shrines) that contain the spirits of Emperor Kammu and Emperor Komei, respectively the first and last emperors to reside in Kyoto. Heian Shrine is dedicated to the two emperors, and there spirits normally reside in the shrine. However, during the Jidai Matsuri the spirits are able to travel through the city in the mikoshi. On October 22nd, 794 Emperor Kammu entered Kyoto, which was then known as Heian-kyo, and established it as Japan's capital which it remained almost without interruption for more than one thousand years. In 1895, after the capital was moved to Tokyo, the Heian Jingu shrine was built and the first Jidai Matsuri was held. It was a relatively small affair back then but it grew steadily over the years, with a small break during the post-World War II recovery period, into the huge prestigious festival of today. In fact, a smaller modified version of the Jidai Matsuri was once even held in Paris to much fanfare.