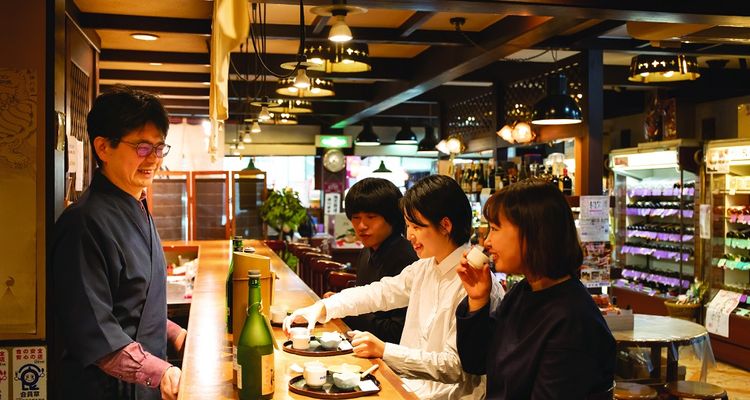 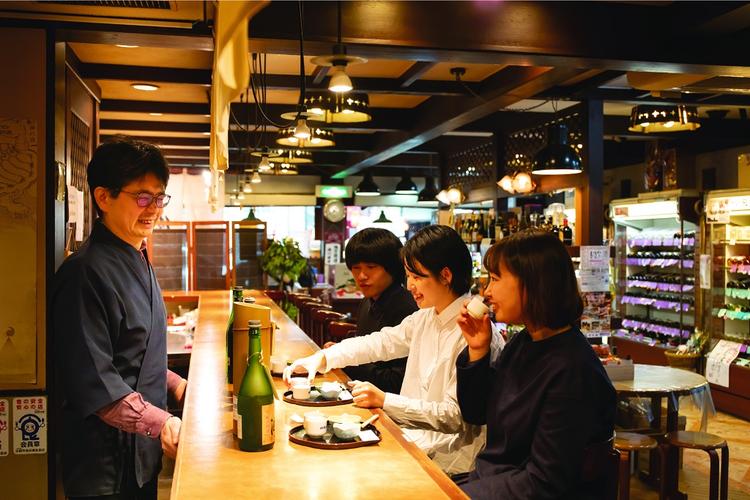 Half-Day Travel Guide for Kyoto's Fushimi Area: A Town Just Waiting for You to Stroll Through

Walk the main thoroughfare of any town, and you can feel on your skin the daily life of the friendly locals. In Kyoto's Fushimi, an area known all over the world for its sake, this atmosphere is especially rich. Here you’ll find not only a bevy of sake breweries, but some wonderful places to enjoy Japan’s national drink. There’s a main street reminiscent of times gone by, and canals that crisscross the area carry tiny boats to and fro. It’s a part of Kyoto, but unlike any Kyoto you have seen before. Take a detour from the tourist-jammed streets of the city, and come experience the leisurely-paced lifestyle of Fushimi locals. For starters, read on for a half-day stroll that will take you to another side of Kyoto.

This inviting liquor store stocks over 80 varieties of Japanese sake, including most of Fushimi’s locally-produced brews. But even more notable than its enormous selection is the counter at the back of the store, where customers can drink kikizake: tasting paddles of up to three types of sake. Just inform the store manager of your favorite styles, and he’ll come up with some recommendations for you. All sake are available for purchase directly from the store. It’s a place where people come for the wonderful sake and conversation, and one popular with locals and foreign tourists alike.

History buffs shouldn’t miss the Terada-ya Inn, a site of interest not far from Fushimi’s main street. Originally a lodging house for boat crews, this was where revolutionary hero Sakamoto Ryoma was nearly assassinated in 1866, as he stayed at the inn during his campaign against the Tokugawa shogun. There are several conflicting theories as to the authenticity of this building, since the original Terada-ya Inn was supposedly burnt down in the Battle of Toba-Fushimi in 1868. The current building is said to be a reconstruction, complete with bullet holes and swords nicks recreated in the wooden door frames to remind visitors of Ryoma’s brush with death.

This fascinating museum is run by one of Fushimi’s largest and oldest sake breweries, Gekkeikan, which was founded in 1673. Richly evocative of the town’s history, the museum is housed in a renovated sake storehouse dating from 1909. Discover the wells that provided the quality water for many a famous sake brew, and the array of tools and equipment used by brewers to extract every drop of flavor. Also available, and perfect for souvenirs, are special-edition brews from among the countless varieties of Gekkeikan sake.

Scenic Canal Views From the Benten Bridge on the Hori River

With its network of transportation canals flowing from the mighty Uji River, Fushimi once thrived as a river port town and place of lodging on the doorstep of the ancient capital. From the Benten Bridge, it’s possible to catch glimpses of this historic riverside ambience even today. Spring and autumn see the canals teeming with boats, and the neighborhood exudes the bustling atmosphere of a canal town.

*Please note: Jikkokubune and Sanjikkokubune canal tour boats are not available during the winter months.

It might surprise you to learn that Fushimi was also a port town - a river port, that is. During Kyoto’s 1,000-year reign as the imperial capital, goods and supplies that shipped from all over Japan arrived in the town by boat. One of these foods was dried kelp from Hokkaido, which for over a century has been processed by local merchant Kitase Konbu. In 2017, the manager of the company opened a cafe and bar next to the store named "Okobu Kitase". The menu is based around home-style obanzai dishes made with kelp stock and paired with local sake. The mainly young clientele enjoy mini-concerts and other regular events here.

Though our list of places to visit on a half-day stroll to Fushimi has come to an end, that doesn't mean that the fun stops there. Fushimi is a town full of attractions to see and places to visit, so if you can spare time for a full day of exploration, then that's what we highly recommend you to do. You'll end the day with a deep understanding of Kyoto's atmosphere and what life is like for the locals.