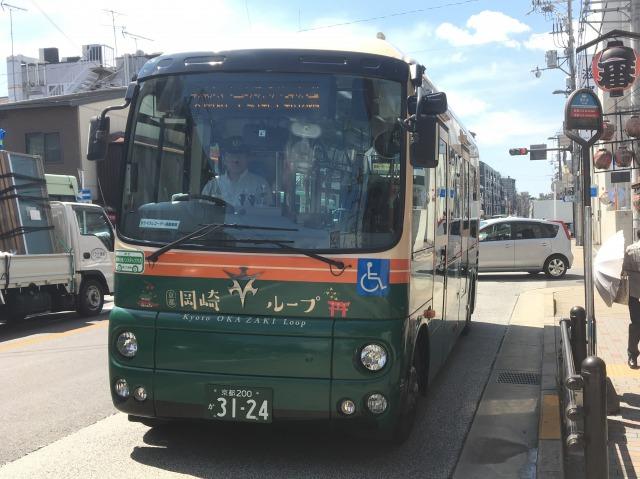 A Complete Guide to Okazaki, the Center of Kyoto's Major Tourist Attractions ~Part 1~

[Local College Students Introduce!] The Okazaki district is the center of Kyoto’s major tourist attractions, from famous temples and shrines like Nanzenji-Temple and Heian-jingu Shrine, to cultural facilities like the Kyoto City Zoo and various art museums. This first part of a 2-part introduction to the region will give you the lowdown on Okazaki and the best way to explore it, the Okazaki Loop Bus. Keep reading for details and pictures!

The Okazaki district is in the southern area of Kyoto's Sakyo Ward and centers around Heian-jingu Shrine. Pictured above is Okazaki's major landmark, the Otorii (Great Shrine Gate) of Heian-jingu Shrine. This area shares its borders with the Tetsugaku no Michi (The Philosopher's Path) that leads to Ginkaku-ji Temple, as well as Maruyama Park which connects to the Gion area.

Okazaki has an honorable history as a location that flourished together with many large temples. Some popular temples remain even today, such as Nanzen-ji Temple, noteworthy for its exquisite Tenjuan Garden (pictured above), along with Eikan-do Hall. Both places continue to attract and fascinate many visitors day after day.

The Okazaki district has also pushed forward the modernization of Kyoto, having hosted the government-run National Industrial Exhibition in 1895. The exhibition site has since been converted into Okazaki Park, offering the community a place for retreat and recreation. Surrounding the park are many cultural facilities, such as the library, zoo, art museums, and theaters - creating one of the best cultural zones of Kyoto.

Let's also not forget Lake Biwa Canal, which was originally constructed to transport water from Lake Biwa, located in the neighboring Shiga Prefecture, making it the biggest project as part of Kyoto's modernization efforts over 100 years ago. Some famous tourist sites along the waterway are Keage Incline, featuring the remains of a rail system which ran on a slope, and Nejiri Manpo, a spiral tunnel made of red bricks.

What's more, the walkways along the canal are perfect for taking strolls. You'll enjoy magnificent views especially during the spring time, when the cherry trees planted along the waterway are in full bloom.

With so many interesting places to visit, you may wonder how you're going to manage getting from one place to another. This is where the Okazaki Loop Bus comes into play. It is a bus service that Kyoto City Bus has been providing since 2015.

It passes through the Okazaki district, as well as Kawaramachi (Kyoto's busiest commercial area) and Maruyama Park, where Shoren-in Temple and Chion-in Temple are located. Because of this, this bus route is perfect for those who plan to tour the major tourist areas of Kyoto.

In addition, only the Okazaki Loop Bus will stop at certain bus stations, such as the Dobutsu-en Seimon-mae or Nanzenji / Sosui Kinenkan / Dobutsuen Higashimon-mae bus stations. Due to this, it is considered a more efficient method of transportation for those wishing to visit the many locations around Okazaki.

The above image shows the actual bus route. Starting from Sanjo Keihan-mae, the bus will pass through the bustling Kawaramachi area before stopping at the Okazaki Koen / ROHM Theatre Kyoto, Miyakomesse-mae (Exhibition Hall) bus stop. From there, the bus will make a counter-clockwise circle around the Okazaki area before heading southward, passing through the Maruyama Park area - in which Shoren-in Temple and Chion-in Temple are located - and then finally coming back to Sanjo Keihan-mae.

The Okazaki Loop Bus is in service from 9:00 AM to 6:00 PM, with 4 buses running at every hour. Bus fares are 230 yen for adults and 120 yen for children. As with the other city bus services, using a 1-day pass is a convenient and money-saving option worth considering.

Here is a rundown of what it's actually like to ride on the Okazaki Loop Bus! Keep a lookout for the bus with this mark depicting the popular sites of Okazaki.

The bus stop marked with this design means that the Okazaki Loop Bus will stop there. The above photo is of the Higashiyama Sanjo bus stop.

The buses can't be missed because they have the same design as the mark on the bus stops. Although there are 2 versions - a green one and a brown one - you'll never have to worry about whether you've gotten on the correct bus or not!

The Okazaki Loop Bus is smaller than other city buses, but there is plenty of room inside, with a well-thought out design to help passengers get easily on and off the vehicle.

At the front of the bus is a monitor showing some of the tourist attractions of Okazaki.

The bus also features large windows that allow you to enjoy the scenery, such as of Lake Biwa Canal, as you ride.

The view between the Shorenin-mae and Chionin-mae bus stations come highly recommended, for this is the only bus that will take this route.

Now that you know the basics on how to tour around the Okazaki area, stay tuned for the second part, which will give you the scoop on recommended spots to visit in the area. You're sure to obtain some useful information, as well as some great food spots to put on your travel plan!