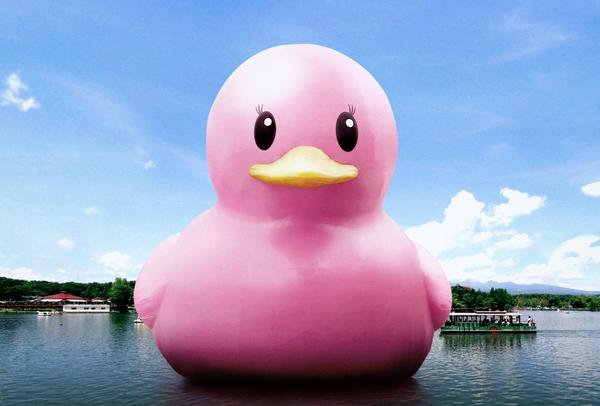 With a height of 20 m, a width spanning 16 m, and a hefty weight of 2 tons, this gigantic duck landed on Nasu Rindo Lake (Nasu Rindo-ko) in April 28, 2018! Its name is none other than "Pink Duck"! For those who want to feature this duck on your social media account before anyone else does, get yourself over there now! There's a direct bus from Nasushiobara Station, which is just slightly over an hour away from Tokyo.

Pink Duck, the largest duck in Japan, is sure to be a hit on Instagram. It first made its appearance on Nasukogen's Rindo Lake in April 28, 2018!

The Pink Duck towers over its surroundings at a height of 20 m, which is as tall as a 5-story building, while its width of 16 m is comparable to that of a single train carriage. To top all that off, it weighs a hefty 2 tons! In case you are wondering, its birthday is also April 28. The Pink Duck likes soft serve ice cream and rainbows, while strong wind and rain aren't exactly its friends!

Besides the Pink Duck, you can see and interact closely with other animals at Nasu Rindo Lake View.

In addition, there are a host of attractions, shops, and restaurants in the vicinity. This place is humongous and has everything you can imagine for everyone - families, couples, and groups of friends. You will definitely need more than a day to see everything that it has to offer!

Don't Miss the Super White Soft Serve That Looks Like a Cloud!

The Jersey cattle raised in Rindo Lake Family Ranch (Rindo-ko Family Bokujo) produce really fresh and full-bodied milk and fresh cream, which are used abundantly in their signature soft serve named "Cloudy Cream" (500 yen). This soft serve also made its market debut on April 28! Not only does it look like a pure-white cloud, but it is even better than an ordinary soft serve ice cream.