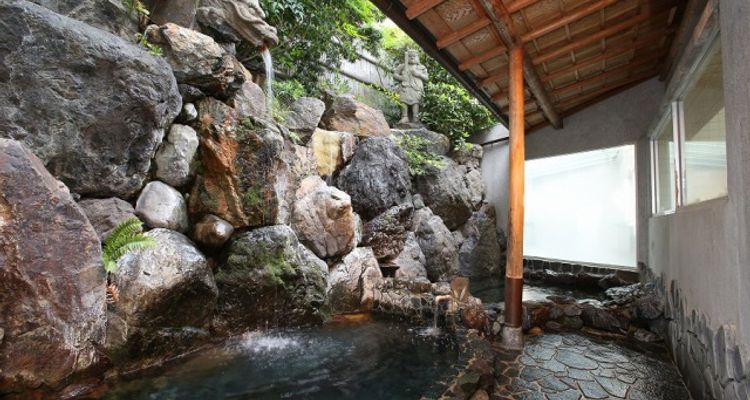 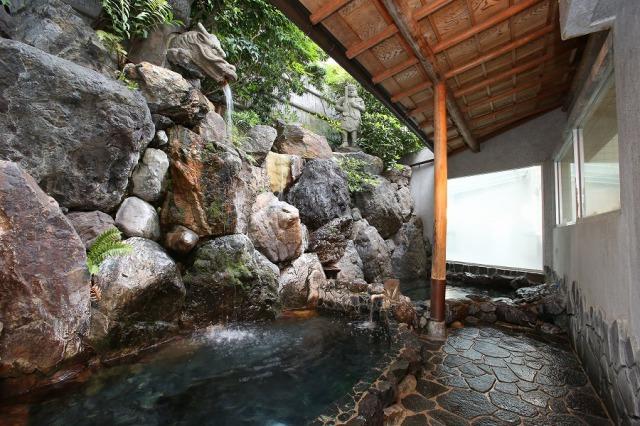 Once a Restaurant and Inn, Now a Public Bath! Dive into Funaoka Onsen

[Local College Students Introduce] This article introduces you to the retro yet stylish public bath, Funaoka Onsen. It started out as a building that lost its original purpose, but after being converted into something new, it has found new life!

Funaoka Onsen is a public bath located in Kyoto City, along Kuramaguchi-dori (Kuramaguchi Street) at the foot of Mt. Funaoka. It is pretty well-known in Kyoto for being retro yet stylish, and attracts many visitors, both local and foreign. The public bath is open all year to accomodate its large number of visitors. It's open from 3:00 PM from Monday to Saturday, but on Sundays you can enjoy a nice bath starting from 8:00 AM.

This well-loved public bath started as a part of the restaurant and inn called Funaoka-ro that was established in 1923. It's not a natural onsen (hot spring), but is in fact home to the first electric bath in Japan, so in 1933, it was officially recognized as an "onsen" and allowed to call itself so by the national government. Thus, it came to become known as the Tokushu Funaoka Onsen (Special Funaoka Hot Spring).

The top part of the roof of the main entrance features a relief design made of curved lines. This is an architectural style called "Nokikara Hafu" that can be seen in temples and castles.

Funaoka Onsen officially began business as a public bathhouse after WWII, but continues to retain the same atmosphere as when it was an inn. The entire building, starting from the Nokikara Hafu at the entrance, is now recognized as a Tangible Cultural Property of Japan.

There's Plenty to Check Out in the Changing Room!

There are many interesting decorations to admire all around the changing rooms at Funaoka Onsen. The first thing that will draw your attention is the latticed ceiling made from laquered keyaki (Japanese zelkova) wood. This kind of ceiling is called "Go-tenjo" and is used in the ceilings of high-class rooms. This is one of the design features that is a legacy from the building's days as an inn.

There's an engraved sculpture in the middle of the ceiling that really stands out! It depicts tengu, a mythical creature that's said to inhabit Mt. Kurama, and Minamoto no Yoshitsune, a military commander that lived in the mid-12th century. The scene is based on a famous legend in which a tengu teaches Yoshitsune the art of swordsmanship.

When you look downwards from the ceiling, you'll see that the wall is decorated with a relief with lovely and colorful floral patterns made of Majolica tiles, which originate from the Mediterranean island of Mallorca. The embossed designs are characteristic of these tiles, which were popular when the inn was in operation, but are now considered a rare sight.

The ranma (transom) in the changing room is also worth a look. The carved sculpture pictured above is based on the Kurabeuma event that takes place at Kamigamo Shrine. Do take time to appreciate the fretwork panel that took craftsmen around 10 years to complete. Other fretwork panels mainly feature scenes of celebration, such as the parade during Aoi Matsuri (Aoi Festival), one of the 3 major festivals of Kyoto, as well the festivals from the local Imamiya Shrine.

The ranma between the male and female baths is a bit different from what you'll usually see. It's decorated with carvings of cannons and the like, and depicts the experiences of the 2nd generation owner during the Shanghai Incident (a conflict between China and Japan in the 1930s).

There's More to Look at in the Passageway!

You'll find walls lined with the luxurious Majolica tiles in the passageway connecting the changing room to the baths. Look closer and you'll be able to fully appreciate just how 3-dimensional the designs on the tiles are.

On the outside along the passageway, you'll find a gorgeous stone banister that's just like the ones you'll see on the edge of bridges or buildings. Apparently, it's from the Kikusui Bridge at Senbon Kuramaguchi in Kyoto that was taken down in 1932.

Below the banister, there's a pond that's home to many koi (carp). You can look down at them and enjoy the sight as you walk. There are also statues of turtles and a maiden in the pond area, and you can also see this view from the changing room and the outdoor bath.

Funaoka Onsen isn't just charming because of the craftsmanship of the decor and retro design. The baths are also really charming, so pay attention to the details!

Firstly, go through the curtains at the entrance and head inside. Leave your shoes in the shoe box, and pay for your bath at the counter.

You'll be able to buy various items like washcloths, bath towels, shampoo, and conditioner at the counter, so you can come empty-handed and still be able to have a good bath.

Change out of your clothes in the changing room and head to the baths via the passageway. There is a whole host of baths, including the Kusuri-buro (Medicinal Bath) that has Chinese herbs in it, Kouon-buro (High-Temperature Bath), Jet Spa, and Sauna.

The bath pictured on the left front side was the very first electric bath to be introduced in Japan. There is electricity flowing in the bathtub, and it has the effect of helping the body to loosen up.

There are also outdoor baths, including the Iwa-buro (Rock Bath) and the Hinoki-zukuri bath (a bath that's made from scented cypress wood). You'll be able to enjoy these baths with unique atmospheres. The Rock Bath, in particular, is well-known as it includes the Kibune-ishi (Kibune rocks) that change in color when water is added.

Funaoka Onsen also runs a guesthouse facility in a converted Kyo-machiya (traditional Kyoto merchant's house) that you can rent for the day. You get 1 free use of Funaoka Onsen for every day's stay as well. The guesthouse is also conveniently located near sightseeing spots like Kinkaku-ji Temple.

There are 3 Japanese-style rooms, a simple kitchen, bathroom, and toilet. Bath towels, shampoo, lounge wear, hairdryers, and other amenities aren't included, so do make sure to bring your own.

Why don't you drop by this public bath the next time you're around the area? You can appreciate a retro Japanese-style building and wash away the tiredness accumulated from a long day of sightseeing!