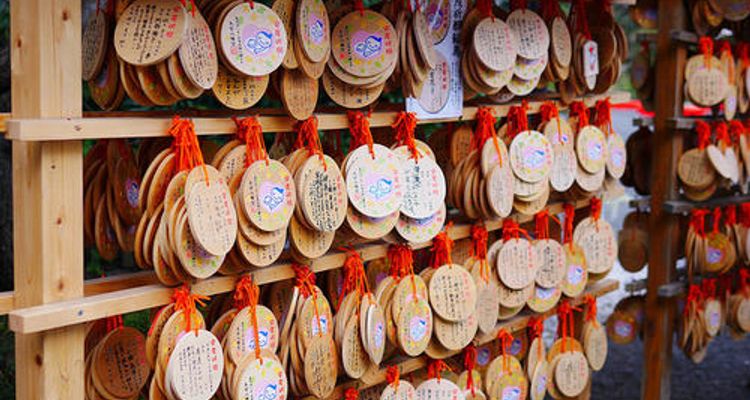 Find Yourself a Wonderful Lover! 10 Shrines in Tokyo That Will Answer Your Love Prayers

If you would like to find yourself a wonderful lover, then be sure to visit a shrine if you ever travel to Japan! There are many shrines throughout Japan that bring good luck and fortune in love and marriage. Here are 10 of these shrines in the area around Tokyo. Marriage shrines are largely divided into two categories: "Ise” and “Izumo”. Tokyo Daijingu Shrine is a shrine with ancient and honorable origins, with its deity having come directly from the topmost Ise shrine, the Ise Grand Shrine. Due to its amazing effectiveness in marriage, it has many visitors. It has over 50 kinds of charms (omamori) and among these, the most popular is the marriage charm in the shape of a lily-of-the-valley flower. The cute white charm resembling a lily-of-the-valley-flower is particularly popular with women. Izumo Taisha Shrine Tokyo Bunshi is one of the shrines belonging to the Izumo category. Its deity comes directly from the Izumo Grand Shrine in Shimane Prefecture. Although it’s a relatively small shrine in a corner amongst all the buildings in Roppongi, it never lacks worshippers. This shrine is not only beneficial for finding love, but it’s also good for getting a new job or making friends. If you sew the marriage charm that they sell onto your clothes, you just might have a lovely encounter! Akasaka Hikawa Shrine is a shrine in the city center that is just an 8-minute walk from either Roppongi Station or Akasaka Station. Not only the main shrine, but even the "Shiawase Inari" on the shrine grounds is a popular spot for attracting a good match! In addition to the love charms (which are a cute pastel color), there is also a work charm that can help you find a good job. It’s a shrine with many highlights, so do take your time when you visit! Shiba Daijingu Shrine - which is located near Tokyo Tower - is a shrine that offers good fortune in a wide range of areas like money, business, love and more. Many wedding ceremonies are also held there, so if you’re lucky, you might catch sight of one! If you’re aiming to boost your luck in love, then you’ll definitely want to get your hands on the “chigibako”. It’s a popular charm that helps women find a great partner in love. They’re all handmade, so they might sell out very quickly. If you find one, don’t hesitate to buy it! Imado Jinja Shrine (which is close to Asakusa) has, according to legend, a married couple enshrined as deities, so it’s thought to grant good fortune with marriage and love. It’s also known as one of the origin areas for the "maneki neko", which beckons good fortune. There are pictures of cats on the charms and the wooden prayer tablets, which are all in the shape of circles. The reason for that is because the kanji character for “circle”, “yen” and “relationship” have the same sound. Take the charm home with you and write your wish on the wooden tablet! Hakusan Jinja Shrine is in Bunkyo, a calm area with lots of university students. Legend says that its enshrined deities are a married couple and Kukurihime-no-Mikoto. Kukurihime-no-Mikoto is a goddess that intervened between the married couple when they were having an argument. Due to this, in addition to marriage bonds, it’s also said to bring good fortune to those who have been separated once. During the rainy season, some other things you can enjoy are the hydrangeas and cats that roam the shrine grounds. Myogi Jinja Shrine is the oldest shrine in Toshima. Although it’s known as a shrine for increasing your luck in winning, since it has the same deity that is also enshrined at Tokyo Daijingu Shrine, it also brings good luck in marriage. If you borrow the full strength of the deity, you just might beat your rivals in love! During the sakura season, there are many sakura trees in bloom at the small shrine grounds, so be sure to try and visit then. Myotogi Jinja Shrine is a shrine located in Japan’s biggest “Koreatown”, Shin-Okubo. In addition to marriage, it also grants good fortune to married couples that are looking to have children. The shrine office - which is located up a flight of narrow stairs - has rows of charms related to marriage. You might be surprised that it’s such a small shrine, but it’s actually quite popular with many worshippers, so build up your courage and pay a visit! Did you know that there’s a shrine at the viewing platform of Tokyo Tower? The Tokyo Tower Daijingu Shrine is the highest located shrine in Tokyo. It brings good fortune for people who want luck with money, grades, marriage, and anything that can be improved. The wooden votive plaques come in heart shapes, as well as in the shape of the Tokyo Tower. Since it’s so close to the sky, it might be easier for your wish to reach the heavens. Omiya Hachimangu Shrine, which is located a bus ride away from Shinjuku Station, is a shrine that provides good fortune for marriage, childbirth and raising children. On the shrine grounds, there is a pair of gingko trees that are called a married couple, and it’s become a particularly strong power spot. There are many people who say that they’ve seen fairies at this shrine. Although you might imagine dainty, cute girls when you think of fairies, the fairies at this shrine are actually like old men. They bring good luck, so try and find them!