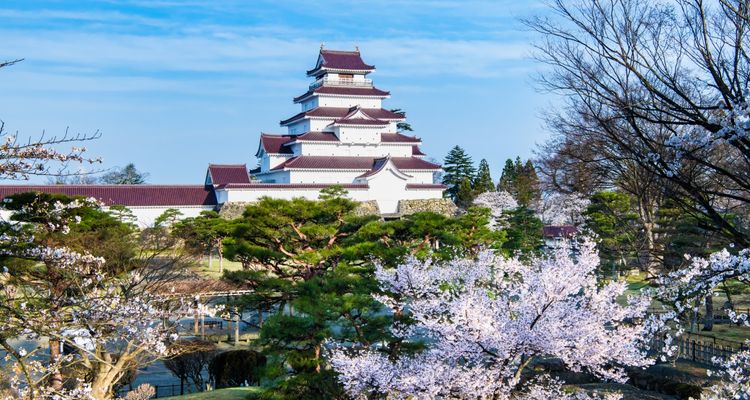 Experience Samurai Culture! A Trip around the Aizu Region by Rail

Aizu is an area where the samurai culture lives very strongly in the castles and townscape, and it's also packed full of charming tourist areas like hot springs. The popular Aizu spots featured in this article are all accessible by rail. If you come to Aizu, won't you also try taking a trip by rail?

If you come to Japan, why don't you combine your interests and travel around the area on a gently-swaying train?

Actually, the Aizu region, which has a number of popular sightseeing spots, is a perfect area to go on a trip by rail. The Aizu railway is especially popular as a sightseeing railway, and there's plenty prepared so that you can enjoy your trip just by riding it.

If you ride the whole line, you can enjoy a trip of about an hour and a half.

The inside of the tatami car The tatami car has a narrow center aisle so that during the cold months of fall and winter, heated kotatsu tables can be placed for customers’ enjoyment. During the cold season the trolley has covered windows, but in the summer the glass is removed so passengers can feel the gentle breeze.

You can enjoy the trolley car just by riding it, but the area it passes through between Aizu-Tajima Station and Aizu Wakamatsu is full of charming sightseeing areas.

So this article will introduce recommended tourist spots etc. focusing on this section of the line.

[Note] The fastest way to reach Aizu-Tajima Station from Tokyo is to take the limited express train (limited express Specia) from Asakusa Station or Shinjuku Station, then change at Kinugawa-Onsen Station to the Aizu Railway’s AIZU Mount Express Gou train. If you do it properly, you can arrive in 180 minutes. However, the most comfortable way is taking the express Tobu Railway train from Tobu Asakusa Station or Kita-Senju Station. If you hop on a train bound for Aizutajima, which is direct, you will arrive in approximately 210 minutes. The fare is also cheaper that way. First of all: the whole route

Five minutes from the Tounohetsuri station is a picturesque scenery of strangely shaped rocks that stretch along that have been shaped by weathering and corrosion for over million of years. Because of its strange shape, in 1943 it was designated as a national monument. In the autumn and winter it’s completely covered by foliage or snow respectively, making it a spot famous for its beauty throughout all four seasons.

The Yunokami Onsen Station area not only has hot springs, but there are also trains and buses that can easily take you to the popular sightseeing spot Ouchi-Juku.

This area is said to have such a high volume of hot spring water due to its 7 sources that if you dug up a dry riverbed, hot water would well up. The area around the station is dotted with hot spring inns and guesthouses.

For people who want to leisurely enjoy the hot springs can check out the free foot baths around the station.

Since you’re only putting your legs in the water, there is no need to remove most of your clothing to enjoy the spring. Everyone looks like they’re having so much fun…you definitely can’t leave without trying this.

People who want to experience a genuine hot spring should stay in hot spring inns or guesthouses. You can heal the exhaustion that comes from a stressful lifestyle by spending a lazy time in a hot spring inn that’s in the middle of the mountain scenery. There are plenty of charming inns and guesthouses in Yunokami Onsen, so please check out the following website to find the perfect place for your stay.

If you take a car or bus from Yunokami Onsen and ride it for about 15 minutes, you’ll arrive at Ouchi-Juku.

Ouchi-Juku is an inn town among the mountains that connect Aizu and Nikko. The military commanders Date Masamune and Toyotomi Hideyoshi also visited Ouchi-Juku, and in the Edo period it flourished as a stop on the daimyo’s (feudal lord) procession and for travelers.

Houses with hay-thatched roofs lined up in a row is one of Japan’s most familiar scenes in ancient times.

Restaurants and souvenir shops now line what was formerly a highway, and sell products the way they were made in ancient Japan. For example, if you watch a dumpling shop, you will discover how dumplings and fish were baked a long time ago in Japan, among many other things.

Ashinomaki Onsen Station is, true to its name, in the Ashinomaki hot springs area.

The Ashinomaki onsen has a history that dates back to about 1300 years ago. There are many lodges in high places that allow for a look at the river below, and you can bathe while gazing down into the valley. There are many charming places to stay in Ashinomaki Onsen. Please look through the website below for the perfect place to stay on your trip.

The city in the center of the Aizu region is Aizu Wakamatsu. Aizu Wamatsu is not only a hot springs area but also an area with many historical spots that are left over from the era of samurai.

The following are the recommended spots within Aizu Wakamatsu.  From Aizu Wakamatsu Station, 2 tour buses, the Haikara-san and Akabe offer convenient routes for sightseeing going in the opposite directions, so you should choose one depending on your destination.

Then get on the “Akabe” and set off to sightseeing in the city! The first spot you should visit is definitely Mt. Iimori.

Mt. Iimori is famous for the incident in 1868, when the Byakkotai (“White Tiger Force”) fighting in the Boshin War between the restoration government troops and the shogunate committed suicide there.

The Byakkotai was a group of 16-17 year old samurai boys who were organized in Aizu, and though they were originally reserve troops, as the war progressed they ended up fighting on the front lines. When the 20 soldiers retreated from battle, they groped along until they found Mt. Iimori. When they looked from Mt. Iimori towards the city, they were greeted by the scene of Tsuruga Castle completely surrounded by flames. With the knowledge that this was a lost battle, they all agreed to sacrifice themselves for the sake of their lord. Among those 20, 1 one of them miraculously lived, and he spread the word about the loyalty and the tragic fate of the Byakkotai around the country.

Mt. Iimori is the scene of that tragedy. Now the area is dotted with museums and graves dedicated to the Byakkotai, as well as a Buddhist shrine, so every year it flourishes more and more as a historical sightseeing spot.

The 19 graves of the Byakkotai The 19 graves are lined up in a row. The graves were all lined up to face their lord’s Tsuruga Castle. This hexagonal, three story shrine was built in 1796 and has a height of 16.5 meters. It was built so that the ascending stairs and the descending stairs are completely separate, so it’s completely safe for the many visitors in that there won’t be any bumping into anyone. This architectural style is rare throughout the whole world, and in 1996, it was declared a national important cultural property. The next recommended spot is the Aizu Bukeyashiki (Aizu Samurai Residences). The Aizu Bukeyashiki was a residence begun by the top chief retainer of the Aizu domain, and it has important cultural properties of the prefecture like the Bailiff’s office and the tearoom. You can enjoy the appearance of traditional Japanese architecture from the Edo period. The appearance of what the rooms looked like at the time have been reproduced. This is the kitchen. Hatamoto the Matsudaira family’s daikan-jinya (where a magistrate who governed in place of the lord during the Edo period) was transferred and restored here.

The next spot is the Oyakuen.

In the middle of the Edo period, this was built as a holiday house for the Aizu daimyo. There are more than 400 types of medicinal herbs and lakes dotted around the properly. When you come to the park, please try the medicinal tea that you can only get here. This is a shot from a festival that was held at the Oyakuen in the past.

The biggest highlight of the area is Tsuruga Castle. It withstood violent battles during the Boshin War, and earned a reputation as an impregnable castle. No words are necessary when you stand in front of this castle. You will be full to the brim with the majesty of the sight.

Near the castle, there is a tea room called "Chashitsu Rinkaku" that was reportedly built by Shoan, the son of Sen no Rikyu, Japan’s great tea master. Here you can enjoy a nice cup of tea. This is an onsen within Aizu Wakamatsu city limits.

This hot spring spa, Higashiyama Onsen, has a history of more than 1300 years.

These springs were beloved by many Aizu feudal retainers and writers. How does going here to heal the exhaustion from your trip sound? In conclusion: Returning to Tokyo

When it’s time to return to Tokyo, there is the option of taking the shinkansen. From Aizu Wakamatsu Station, you can take the Banetsu West Line to Koriyama, and from there take the Tohoku Shinkansen to Tokyo. On the way to Koriyama on the Banetsu West Line, on the left side you will be able to see Mt. Bandai and on the right Lake Inawashiro, both beautiful sights that you can enjoy on your way back to the city. Good news, everyone! Three people can win a tour around Aizu Wakamatsu just by answering the quiz correctly!

Please click below for the campaign details and the application form.