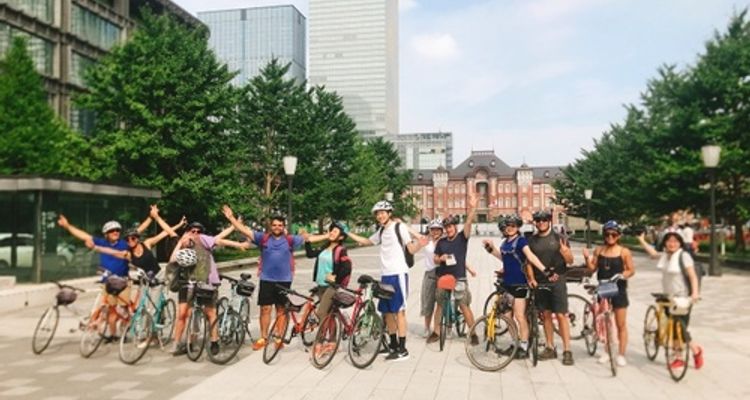 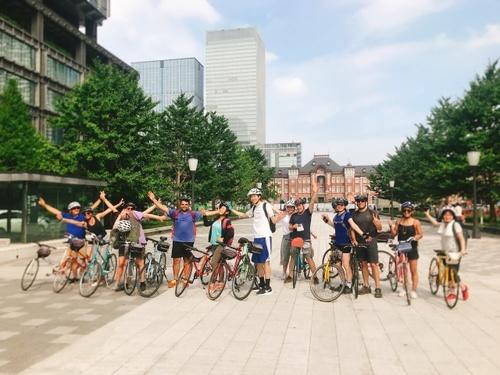 Since you’ve gone out of your way to come to Tokyo, don’t you want to tour around in the most efficient way possible? In that case, join a bicycle tour! You can get an awesome experience of feeling the atmosphere of each area while visiting different sightseeing spots. This time, some of our staff from tsunagu Japan embarked on the ever popular “Tokyo Great Cycling Tour” to show all of you what a bicycle tour in Tokyo is really like!

What is the Tokyo Great Cycling Tour?

It is a day-trip bicycle tour service for foreign visitors that have come to Tokyo. Every tour comes with staff members that can guide you in English.

When this service first started in 2006, they only had 50 customers for the whole year. However, thanks to hard work, they won 1st place for Trip Advisor's Top 10 Things to Do in Tokyo 2010 rankings. This eventually led to them getting over 2000 customers in 2015, with even more at present (2017). They're one of the most popular bicycle touring services!

Some of our staff at tsunagu Japan joined one of their tours during early August. Here are some details on the bicycle tour they went on!

The Tokyo Great Cycling Tour is separated into 6 routes (A - F). Routes A to C are day-trips, while Routes D to F only occur if enough participants request for a bicycle tour on certain days.

We chose Route A.

This is a 26km-long course that mainly takes you around the Tokyo Bay area, where you can visit amazing sightseeing spots like Tsukiji Market (world's biggest market), Odaiba, Zojoji Temple, Tokyo Tower, and the Imperial Palace. Along the way to Hamamatsucho from Odaiba, you'll also be able to ride the water bus!

Below is an explanation of how our tour went, complete with tons of pictures!

First, we chose which bicycles we wanted to ride, and then began preparing them for the journey. All their bicycles were light and felt great to ride on.

We had to do simple self-introductions, saying short facts like where we came from, etc. Everything felt calm and peaceful.

Once all the preparations were done, we departed!

Our first stop was the hot spot, Tsukiji Market. We quickly stopped by Sumiyoshi Shrine (Sumiyoshi Jinja) on the way.

We first stopped by Sumiyoshi Shrine. It is believed that the guardian deity for the Tokyo Bay area (including Tsukishima) resides here.

The Tsukiji area still has a working-class atmosphere remaining.

Tsukiji Market is a place that everyone knows. We had 20 minutes of free time, so everyone separated to go exploring. There were many street stalls around, and plenty of bartering going on. Every part of the market was buzzing! (Photography was forbidden inside the market.)

After our exploration finished, we headed for Odaiba, passing by Sumida River (Sumida-gawa) and riding along Tokyo Bay.

Along the way, we took a break at Harumi Bridge (Harumi Ohashi). The guide gave each of us ice cream, so we all ate some happily!

After the break, we kept heading forward towards Odaiba. We passed by Toyosu - where the new marketplace will be built - and Ariake, which is home to Tokyo Big Site and other popular spots.

At Odaiba, we ate lunch at a Western restaurant that's extremely popular with tourists - Gonpachi. Their main shop is in Nishi-Azabu, and it is well-known for having been in the Hollywood movie, Kill Bill.

Everyone ordered whatever they liked, such as Ten-don (rice bowl with tempura as a topping) and Negitoro-don (rice bowl with minced tuna and green onions as toppings). Each order came as a set with a small bowl of soba (buckwheat noodles) and a drink.

After we devoured our delicious lunches, we took the water bus and crossed Tokyo Bay to head to Hamamatsucho.

Once we arrived at Hamamatsucho, we rode on our bicycles until we reached the neighboring Zojoji Temple and Tokyo Tower.

We got off our bicycles to explore Zojoji Temple.

The guide told us various interesting facts about Zojoji Temple and Tokyo Tower. We were astounded by the hilarity of what they said! We laughed until our sides hurt.

After our exploration was over, we headed for Atago Shrine (Atago Jinja).

After listening to the guide's explanation, we headed down the steep Stone Steps of Success and prayed.

After visiting Atago Shrine, we finally headed to our final destination.

Passing by central areas like Toranomon and Hibiya, we pushed forward to the Imperial Palace!

We listened to the guide's explanation while taking in the stunning sight of the Imperial Palace's famous Niju-bashi (2 bridges that form an entrance to the inner castle grounds). It was then that the sky started to clear up!

After our visit, we trudged along to Tokyo Station.

We took a celebratory picture with Tokyo Station as the background. Even though we were all supposed to be tired, everyone was grinning widely!

It took 6 hours to complete the whole 26km-long bicycle tour.

When we returned to the store, everyone toasted with a glass of beer! There's just something special about having a glass of beer after some intense exercise.

Right after our celebratory drink, our staff interviewed some of the participants on the tour!

Taiwanese Female (With Her Significant Other)

"During my previous trip to Tokyo, I always took the train or walked to get around. But I wouldn't have been able to visit so many places in such a short amount of time! It was great that I was able to go to many places in this tour. And since I got exercise out of this too, I don't feel so bad about having eaten a ton."

"It was an amazing tour where we got to see most of what Tokyo had to offer. 30℃ is a bit hot, so we're slightly tired, but it was great exercise. It's all very international, and the host was excellent, so we really do recommend this tour to others!"

"Tour was great and we had a great time. We got to explore all of Tokyo. Everyone here was super nice and it was a very international group. We had a great lunch. I would highly recommend it to whoever's interested."

Everyone seemed really satisfied with the tour!

You can only visit this many sightseeing spots in 1 day by going on a bicycle tour! It's a great chance to truly feel the entirety of Tokyo by riding through the city and its alleys.

What made Tokyo Great Cycling Tour so great was the kindness and humor of the staff, who did their best to provide for us with utmost hospitality. Now we understand why it's so popular with tourists!

Next time you come to Tokyo, won't you give this bicycle tour service a try?

Check Out Our Video!

We made a video that summarizes everything about the tour, so please check that out as well!