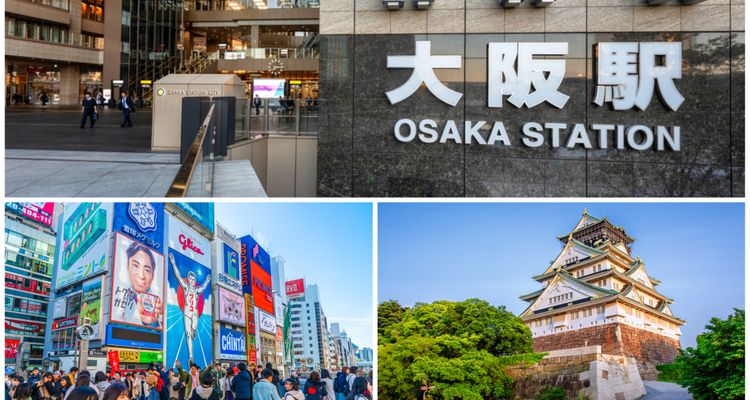 Start off your Osaka trip with this list of things to do around Osaka Station! The area surrounding Osaka Station is brimming with sightseeing spots that you will definitely want to visit while you're in the city. In this article, we'll introduce 10 recommended spots in this area, including the Umeda Sky Building, which has an observation deck from which you can get a full view of the city, and the Osaka Science Museum, where you can have fun with the whole family. All of these spots are easy to get to, so be sure to work these into your schedule when you visit Osaka!

Umeda Sky Building is a skyscraper that was built in 1993 and acts as a symbol of Umeda. Within the building, in addition to restaurants, bars, and a movie theater, there is also a retro restaurant street on the basement floor called Takimi Koji which replicates the Japanese townscape during the 1920s.

One of its biggest attractions is the Kuchu Teien Observatory located on the top floor. Many people flock here every day to get a sweeping view of the city. The daytime view is fantastic, but if you're going to make your way over to the observatory, coming here in the evening is highly recommended. The evening view with its romantic atmosphere has been selected as one of the top 100 night views in Japan, and after dark, the walkway lights up so that you can further enjoy a nighttime stroll in the clouds.

There are also many souvenirs, including a 3D puzzle that can only be bought here, for sale at SHOPSKY39 on the 39th floor, making it a perfect spot to purchase gifts for friends and family.

At Osaka Science Museum, which is located roughly 10 minutes away from Osaka Station by car, you can enjoy their planetarium and exhibition hall displaying a total of 200 items. The planetarium program changes every 3 months, so you'll have a new experience each time you go. During weekends, holidays, and the summer break season, they hold the "Family Time" event at the planetarium, where families with small children can fully enjoy the starry sky while listening to the staffs' explanations. In addition, there are also many fun events for children like the daily science shows, so it's recommended for families looking to spend a fun-filled day together learning about science!

GRAND FRONT OSAKA is a great spot for those looking to go shopping, and is located just a 3-minute walk from Osaka Station. It is the largest shopping facility in Japan and is split into 3 sections: North Building, South Building, and Umekita Plaza. There are 272 stylish shops available here, with a wide variety of restaurants and stores selling clothes and interior goods. There are bakeries and eateries that open as early as 7:30 am, so you can even relax and enjoy a meal here in the early hours of the day. If you're looking for somewhere to eat late in the night, head over to the Umekita floor. It's filled with many Japanese, Western, and Chinese restaurants that are open until 4 am, so you can enjoy some drinks here after dinner or go bar hopping here, too!

Osaka City Central Public Hall, a designated cultural asset of national importance, is located roughly 10 minutes by car from Osaka Station. Both the interior and exterior of this structure is filled with history, and it was often used as a venue for many events such as concerts and lectures. In present day, the facility can still be reserved for various events, and the exhibition room on the basement floors can be viewed freely.

A guided tour is recommended for those who want to really dig deep into the history of this building. In addition to the exhibition room, you can also enjoy your time here by observing the special rooms, which were formerly used as rooms for noble visitors. As for the guided tours, there are basic 30-minute courses with a guide, as well as a special course that comes with an original course lunch. If you're interested in these tours, be sure to check the official website for the tour times!

Tsuyu no Tenjinja, which is also known by the name Ohatsu Tenjin, is a shrine that is known as the scene of the double suicide in a puppet show called Sonezaki Shinju. It's particularly known for the many charms and votive plaques associated with Ohatsu and Tokubei, the characters that appeared in the show. There are many variations of these votive plaques, including heart-shaped ones and those depicting the two characters, but the rarest one of them all is the one with an illustration of Ohatsu's face drawn on it. Ohatsu's face is colored white, and you can pray for beauty by drawing in her eyes and nose. How about trying it out for yourself?

6. The National Museum of Art, Osaka

The National Museum of Art, Osaka, is an art museum with a distinct appearance that mainly displays art pieces from after World War II. The lobby is located on the 1st floor, and the galleries are located in the basement floors, which is considered a very uncommon layout and structure in Japan. The basement galleries have permanent displays as well as rotating exhibits, and you can see works of art from all over the world up close. The Osaka Science Museum is located right next to it, so you could even go on a sightseeing course involving the art museum followed by the science museum!

The Osaka Prefectural Nakanoshima Library is a prefectural library that has been designated as an important cultural property. The building was built in 1904 and maintains a dignified air that is brimming with history. There are roughly 550,000 books in its collection, with many business-related books in particular. On the 2nd floor of the library is a shop specializing in Swedish-style open-faced sandwiches, so you can enjoy a relaxing meal while you're here as well. The food is super photogenic, so it's perfect for those who are active on social media! How about exploring this elegant structure while savoring a delicious meal?

Kids Plaza Osaka is a highly recommended sightseeing spot for families traveling with small children. This facility offers a museum for kids and many interactive exhibits and programs. It's the perfect spot for kids who want to experience and learn about a variety of different subjects. "Kids Town" is located in the center of Kids Plaza, and is a curved structure that can be enjoyed in many ways by sliding down the slides or climbing up the walls. There's a feeding room and diaper changing space available within the building, which is a great point for mothers who want to enjoy their travels without any worries!

The rose garden found within Nakanoshima Park is a must for those planning on traveling around the Osaka Station area in spring or fall. There is no entrance free, so you can view a garden filled with roughly 3,700 roses for free! Many different varieties of roses bloom here, so the splendid view is really worth a visit. The best time to see the roses is in spring from mid-May to late May, or in fall from early to late October. How about heading over to bask in a view of the beautiful roses blooming all across the park? There is a stylish cafe located across from it where you can gaze at the rose garden, so you can even enjoy the beauty of the roses over a nice meal.

The Japan Mint is a museum which dispays many old Japanese coins that date back to the Tensho era (1573 - 1592) and the Meiji era (1868 - 1912), as well as many currencies from other countries. No prior reservation is needed, so if you're interested in touring the museum, all you have to do is fill out a simple form at the office. There is a factory within the premises (reservations required) that you'll want to be sure to check out, too!

This is also where you'll find a street called "Sakura no Torinuke," one of the most famous cherry blossom viewing spots in Osaka, so the area is bustling with many visitors every April. It's lit up at night, so you can enjoy a whimsical atmosphere that's quite different from its daytime counterpart. It's only open for a week every year, so make sure to check the official homepage around mid-March if you're interested! It may be a good idea to try to coordinate your plans for sightseeing around Osaka to align with the cherry blossom season!

There are many new sightseeing spots opening up all over the Osaka Station area, but there are also many historical spots like the Osaka City Central Public Hall and Tsuyu no Tenjinja. How about embarking on a journey where you enjoy the new shopping facilities while also diving into Osaka's history? Be sure to make your way over to Osaka Station to see some of these sights!