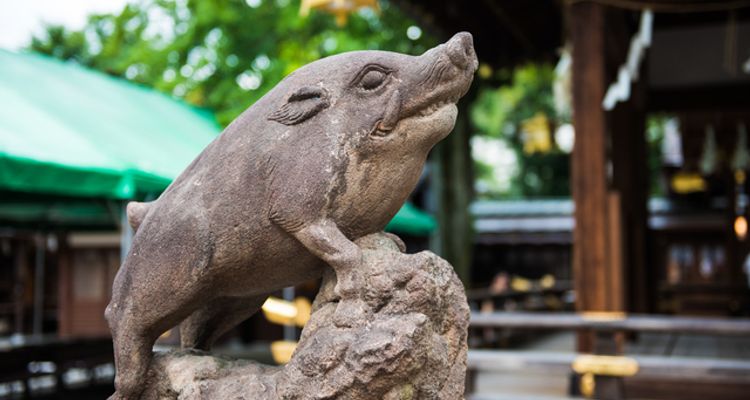 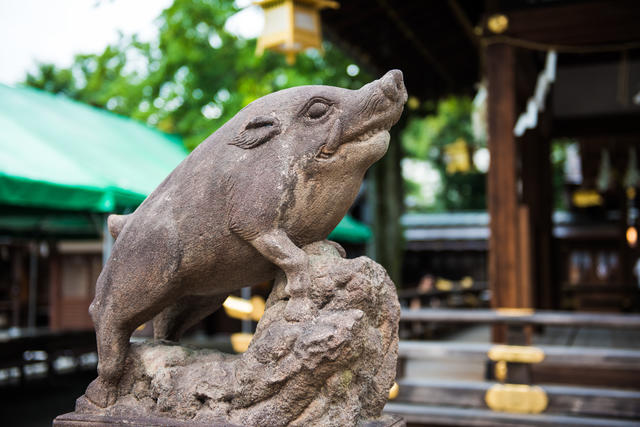 [Local College Students Introduce] There seem to be a lot of people out there who, despite being interested in temples and shines, find them difficult to approach or don't quite know what to look at when they visit. That's why local college students in Kyoto created this series of beginner's guides to animal-related shrines! In this article, get to know Goou Shrine, which features boars as messengers of the Gods!

What Kind of Shrine is Goou Shrine?

Goou Shrine is a shrine located on the western side of the Kyoto Gyoen National Garden. The main gods worshiped here are the historical figure from the 8th century named "Wake no Kiyomaro" and his elder sister, Wake no Hiromushi.

Kiyomaro was one of the people credited with the creation of Heian-Kyo (the former name for Kyoto), and his portrait was even used on paper money. Kiyomaro is now known to be the guardian god of the hip and legs.

Before the creation of Heian-Kyo, Kiyomaro was embroiled in a political struggle and was sent into exile with the tendons of his legs cut. During his dangerous journey to exile in Kyoto, in which there were multiple assassination attempts by his enemies, 300 boars suddenly appeared from the mountains and then accompanied and protected him during the rest of his journey. To add to that, his leg injuries were miraculously healed and he was able to stand and walk again.

As the story about Kiyomaro would suggest, Goou Shrine is also commonly known as the Boar Shrine (Inoshishi Jinja) and features many boar statues within its compounds.

First, you'll notice the two Koma Inoshishi (guard boars) placed in front of the main shrine. These boars, one male and one female, are commonly recognized as symbols of the shrine.

Upon entering the shrine compounds, you'll see a temizuya (place for washing your hands) on the right. The water at this temizuya comes from a bronze boar statue's mouth, and it is said that good fortune will come to you if you stroke the boar's snout!

On the left of the hall of worship, you'll see boars collected from all over the world! From ornaments to real boars that have been stuffed, all kinds of boars have been put on display here.

The boar collection can also be admired in the area near the shrine office. There are many boars on display here as well, so be sure not to miss it.

Pictured above is a chainsaw sculpture made from the trunk of a 300-year-old katsura (Japanese Judas tree). It's called the Hisho Oyako Inoshishi ("Flying Parent and Child Boar") and depicts a sacred boar protecting its children. This carving and two other sculptures, the Nobori Kami Inoshishi and Ori Kami Inoshishi ("Ascending Sacred Boar" and "Descending Sacred Boar"), were made by Keiji Kidokoro, a chainsaw art world champion!

The statue above is the Gankake Inoshishi (wish-granting boar), and as you can see, there are many Kuratatei-gushi placed around it.

Kuratatei-gushi come in a set of two, and can be bought at the shrine office for 1,000 yen. Write your name and your wish on one of the Kuratate-gushi and place it in front of the stone boar statue, and then take the other one home with you for decoration. This is a practice that's unique to this shrine!

Goou Shrine's charms are not limited to the boars. On the left side of the main shrine, there's the Ashinae Nangi Kaifuku no Hi. This stone monument is used by those who suffer from injuries or ailments of the hip and legs to pray for recovery, either by standing on the footprint shape or just by rubbing the monument with their hands.

Here, you will also find a Chinese quince tree that is more than 100 years old. It's known as the Zensoku Fuji no Go Shinboku (sacred tree that seals asthma), as the liquor made from the Chinese quince of this tree is said to be effective against asthma. At the shrine, you will be able to buy Chinese Quince Senbei (rice crackers) from 900 yen for a pack of 6, as well as a host of other Chinese quince snacks.

There is a 3m wide and 2m tall Sazare Ishi (small rocks that have over time been fused together by calcium carbonate), as well as a large gingko tree that is hundreds of years old. This shrine is full of hidden charms!

Plenty of Souvenirs to Pick From!

There are so many items available that you could even count the huge selection as one of the shrine's attractions! Ema (wooden plaques on which shrine visitors write their wishes) (500 yen) come in 6 different designs!

You'll find that there are also many items named after the boars, like the ceramic protective charms (Shiro Inoshishi Omamori) (700 yen). There are even neckties and teacups with boar designs.

Of course, there's also the Leg Protection Charm (Kenkyaku Mamori) (1,000 yen) - just one of many items available for protecting the legs and hips!

Goou Shrine also sees many events happening on its grounds. The Inoko Sai (Harvest Festival), known for its elegance, happens every 1st of November. On the 4th of April, there's the large event, the Goou Taisai. And finally, on the 21st of every month, there's an Ashi Koshi Matsuri where people pray for the health and safety of the hips and legs.

Doesn't that sound interesting? If it does, drop by the shrine when you visit Kyoto!

And if you want to know about even more shrines devoted to animals, check out the articles below, which comprise the rest of this series: