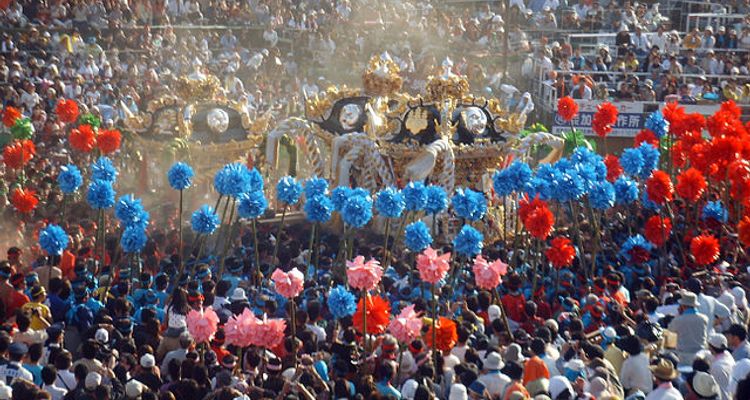 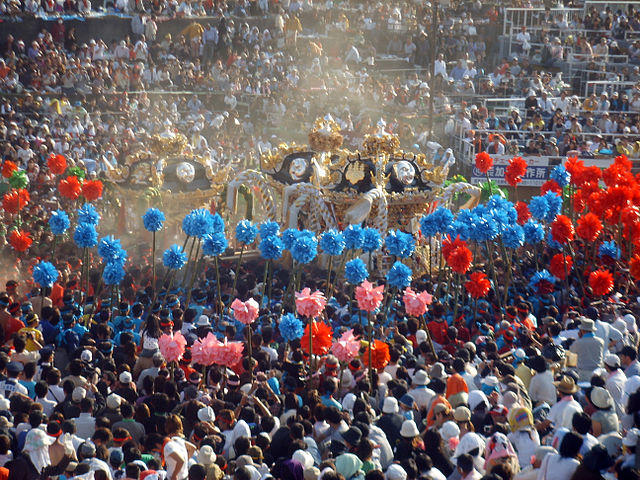 Beautiful Mikoshi? What if they start to ‘fight’?

Nada no Kenka Matsuri in Himeji City is the biggest portable shrines fighting festival in Japan held in October annually.

I have been writing a lot about festivals held in Japan, but Nada no Kenka Matsuri is some of the few that grab my attention. We know when there is a festival in Japan, most probably you will expect to see the beautifully decorated portable shrines and palanquins known ad yatai too. But what if these portable shrines started to fight?

This unique two-day festival is held every year from 14th October in Shirahama Town. The fighting involved three portable shrines and seven other yatai, which represent the seven teams from the villages in the town. The yatai of each team is accompanied by a specific colour each.

As this is a fighting event, we can expect some violence to be included. Hence, the yatai and shrines bearers are only limit to boys from high schools and men below 45 years old. No woman is allowed to carry the yatai or the portable shrine.

There are no detailed rules or opponents for the vehement collisions of the portable shrines. As soon as the portable shrines are set properly on the men's shoulders and everyone is ready, they are knocked against one another at random, and the moment a portable shrine is hoisted on top of another, the contest is over. The most exciting part of the festival is about the fighting between three shrines. In this part the men whose age is over thirty five will wear white headbands. The men who is between the age of the twenty six and thirty five will wear yellow headbands, and those under twenty six are red headbands. All of these people will have a bamboo pole in their hands. Although there are many festivals holding like these every year. But this one is the specialty in Japan. The main fighting event is set on the 15th. On the eve, there are mainly the preparation works to be done. There will also be presentation of Shishi-mai or better known as the Lion dance at a temporary stage built at Shirahama Elementary School. On the first day, the event starts at about 11 am. All the seven yatai will be parading to show to the public. As the festival is dedicated to the Matsubara Hachiman Shrine, the seven yatais will enter the shrine and bow to the Gods. The Shinto Priest will then bless the team by tossing purified salt to the yatai. 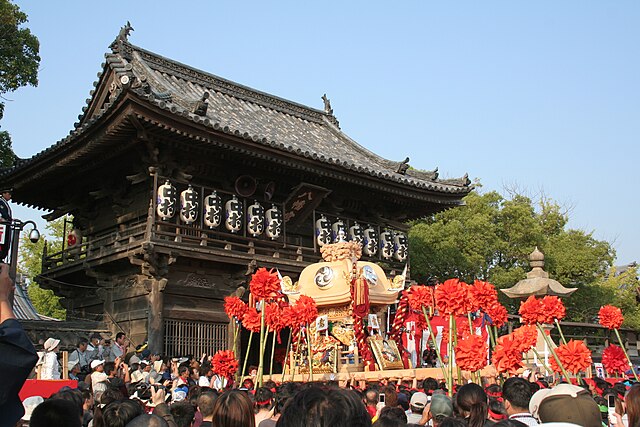 Meanwhile, the three Mikoshi (portable shrines) will enter the shrine gate to receive their blessings from the Gods. After the blessing, few yatai will start to bang to each other. But the “fake” fighting is nothing compared to the portable shrines fighting on the next day. Basically, the second day of the event is more violent, so do keep yourself alert and follow the instructions of the police on duty.The event will start by receiving blessings just like the first day and then the real fighting starts. The highlight of this festival is Yatai-neri, the parade of "yatai", festival floats, gorgeously decorated with wood carving, gold and silver handiwork and embroidered curtains. The yatai are carried on the shoulders of men and are surrounded by the men holding "shide" (bamboo poles decorated with colorful paper) in their hand. As dusk sets in, illuminations on each of the yatai are lit.