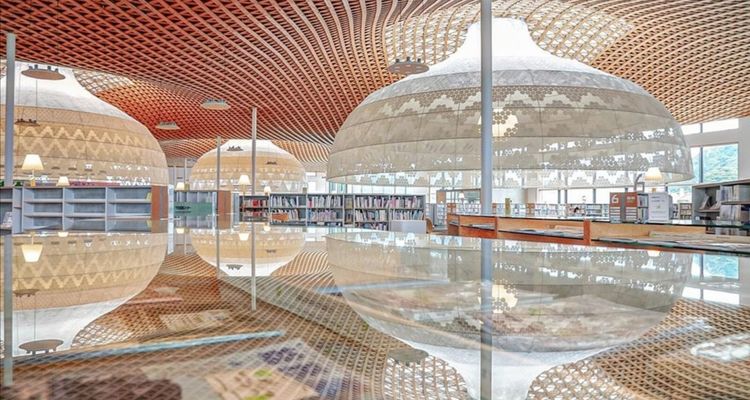 Are you an avid reader, a lover of art and aesthetics, or interested in modern Japanese architecture? If your answer is yes, then these libraries might be the perfect addition to your Japan itinerary. The various libraries throughout Japan not only boast massive collections of books, but also come in different forms of architecture, often as complexes built in harmony with its local surroundings. In recent years, renowned Japanese architects such as Ando Tadao, Kuma Kengo, and Ito Toyo have been invited to work on designing libraries both old and new. The resulting buildings are magnificent; some have won major architecture awards in Japan, while others have been recommended by foreign media as must-sees. Read on for a handpicked list of amazing libraries in Japan!

Public libraries in Japan are usually open to all for free, while university libraries often have restricted access and require a student or staff card to enter. Some offer visitor passes on the spot or by reservation, so it is advised to check beforehand.

Although libraries are public spaces, don't forget about the following etiquette and manners as you wander through the rows of bookshelves:

Ueno Park is one of the most popular tourist spots in Tokyo. It boasts numerous facilities including a zoo, a playground, an art gallery, museums, and, of course, a large library that is well worth visiting. The library is a classical western-style mansion both inside and out, and was designed by the Japanese master architect Ando Tadao. It is also the first library in Japan dedicated to children's literature in Japan, thus earning the name “International Library of Children's Literature.”

The historically elegant International Library of Children's Literature is a favorite among Japanese parents, boasting a collection of more than 400,000 children's literature and picture books in different languages. In addition, there are areas designated for story-telling, exhibition halls, multimedia rooms, and rooms for other purposes where children of all ages can lose themselves in a good book. If you are traveling with kids, this is the place for you.

Located in northern Tokyo, the Kita Central Library is a historic red brick building. It used to be a Japanese army storehouse in the past, and was later revitalized to become a library in 2008. The outer walls are preserved and the interior underwent a major revamp to strike a perfect balance between old and new. Because of its characteristic red brick exterior, it is also known as the "red brick library".

The library has a spacious interior and high ceilings, and its unique atmosphere draws many people to pay a visit. Moreover, with the opening of a cafe, visitors can now spend their leisure time here reading and enjoying a nice cup of coffee.

Japanese master architect Kuma Kengo's works are widely known and admired, many of which are must-sees for tourists. One such masterpiece is hidden within a beautiful forest in Kochi Prefecture in Shikoku. It was only recently completed in May 2018, and is already said to be the prettiest library in Shikoku. Behold the Yusuhara Community Library in Yusuhara-cho.

The Yusuhara Community Library made good use of its surrounding forest and was mainly built with local fir wood, creating an enormous reading space with high ceilings. During the day, bright natural light can reach into the library and replace artificial lighting; at night, utilities are solar-powered. As a result, the library becomes warm and cozy, allowing readers to relax.

Gifu City Central Library's new main building opened in July 2015 and is designed by Ito Toyo, another Japanese master architect. It is also called "Minna no Mori Gifu Media Cosmos." As hinted in its name, it is more than just a library: it is in fact a multifunctional complex facility with lecture halls, art galleries, community centers, and more.

When you enter the library, true to its name, the first thing you see is an expanse of ceiling seemingly sewn with bamboo vine. Instead of cold concrete, wood was chosen as the major building material for its sense of warmth. Below, there is a half-covered, sphere-shaped reading area. The streamlined design gives an impressive visual effect, and also filters the lights to provide readers with softer light that is easy on the eyes.

Renowned Japanese graphic designer and MUJI art director Hara Kenya was invited to work on graphics like signages in the library, drawing further admiration from visitors.

Kanazawa Umimirai Library has won multiple architectural design awards both in Japan and around the world. It has attracted much attention in recent years and has received millions of visitors since its opening.

The library looks very modern both inside and out, and is the fruit of the collaboration between two rising designers: Kudo Kazumi and Horiba Hiroshi. It has been graced with awards such as bring part of the World's 25 Most Beautiful Public Libraries, World's 20 Most Charming Libraries, Best Four Libraries in the World, and the Good Design Award in Japan.

Kanazawa Umimirai Library uses pure white as its theme color, and has about 6,000 holes of different sizes in its walls to let in natural light, which is as practical as it is eye-catching. The high ceilings rely on only 25 pillars for support, creating a spacious interior with a high-tech, futuristic vibe. The seemingly simple public space holds many delicate designs, and can be regarded as a shining example of contemporary spatial design. Why not give the library a visit when you visit Kanazawa?

Obuse Town Public Library (Nagano): One of the 15 Libraries to Visit Before You Die

Obuse Town Public Library sits next to Obuse Station in Obuse-machi, Nagano. Being a small station in the countryside, the surroundings can be rather dark at night; so the library was built for the purpose of illuminating the neighborhood and providing students and residents with a place to read and socialize. It has since become known as one of Japan's most beautiful libraries.

In order to coexist in harmony with the surrounding hills, the library was designed with minimal decoration and contains only gentle curves that connect with each other, letting natural sunlight to seep into every corner. The resulting atmosphere is simple, refreshing and warm, allowing visitors to relax.

This small library is not only one of the most beautiful libraries in Japan, but has also won multiple major architecture awards. Foreign media named it as one of the "15 libraries to visit before you die", bringing fame and tourists to the peaceful town.

Akita International University Nakajima Library is the only library in Japan that is open 24/7 all year round. It mainly serves students and staff of the university, but also welcomes the general public. It has a collection of more than 80,000 books and multimedia resources, while its fresh take on architectural design is known far and wide as well.

Drawing inspiration from the Colosseum, the library used luxurious local Akita fir wood as its major building material, combining traditional Japanese craftsmanship to create a space that is both appealing and useful. Its dome-shaped roof is like a traditional Japanese umbrella, providing shelter to all gathered under for a good read, and filling the air with the light fragrance of fir.

On the other hand, the bookshelves and reading corners are arranged in such a way that visitors can easily find somewhere to read and lose themselves in a sea of books.

Akita International University Nakajima Library has won a number of local and international architecture awards, including the Japan Good Design Award. Compared with public libraries, it is indeed rare for a school library to be considered as one of the most beautiful libraries in Japan. Don't miss out on this traditional aesthetic library if you are travelling to Akita!

Takeo City Library in Saga has been the talk of the town since opening for its simple yet charming style and unique business model.

The 1st floor is managed by Tsutaya Books and Starbucks, whereas on the 2nd floor there is a library with a reading area. The three combine to form an innovative complex which has brought in both great reviews and the 2013 Good Design Award.

In the Takeo City Library, you may browse through the vast collection of a library, or take a look at the new arrivals in Tsutaya, or even have a cup of coffee if you feel like it. It is a well-run commercial space that can cater to everyone's needs.

Libraries nowadays are no longer just a place for reading, but also a display of architectural design and aesthetics. Visiting libraries such as these can enrich your mind and soothe your heart. Are you interested in any of the recommended choices? Pick one and start planning for your next trip!