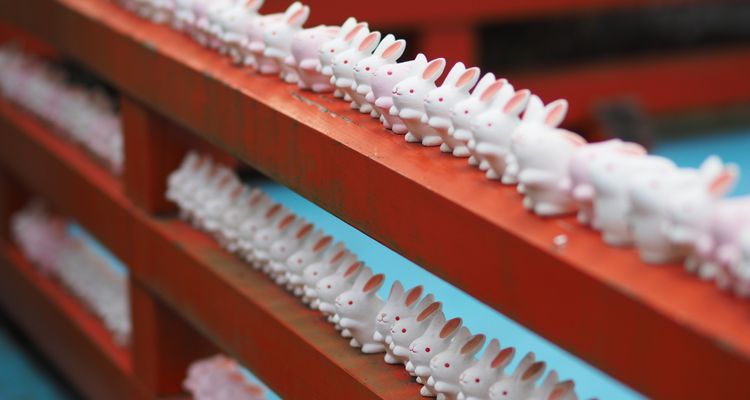 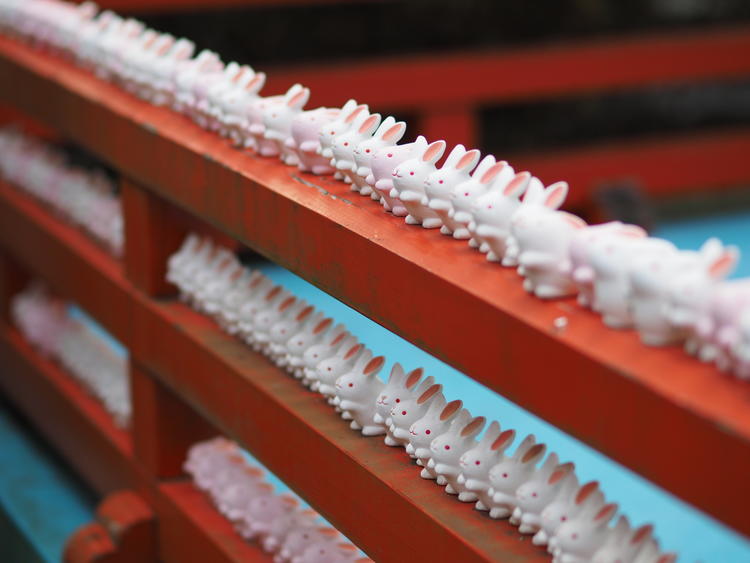 [Local College Students Introduce] There seem to be a lot of people out there who, despite being interested in temples and shines, find them difficult to approach or don't quite know what to look at when they visit. That's why local college students in Kyoto created this series of beginner's guides to animal-related shrines! Check out the Higashi Tenno Okazaki Shrine, also known as the "Usagi Shrine," where the rabbit motif statues and blessed goods are popular! Inside the grounds of Okazaki Shrine you can see the rabbit motif everywhere. So adorable!! The area of Okazaki is famous for shrines such as the Heian Jingu Shrine. Okazaki Shrine has been a place of worship for more than 1,200 years. Originally this shrine played a role in protecting the emperor, his court and its citizenry. It is also called Higashi Tenno (Emperor of the East) because it is located to the east of the former capital, and it is beloved by the locals even in the present day. Nowadays, the area of Okazaki is a lively sightseeing spot, but originally it was located on the outskirts of the capital and therefore nature was plentiful. However, the peaceful grounds inside still remind visitors of the atmosphere of the past. The air is very fresh and clean because the shrine is surrounded by a lot of trees.

After going through the torii entrance gate, the area widens into a relaxing, sprawling open space. The building that is behind the trees is the Honden (main hall) and in front of the Honden, in the center of the grounds, are shrubs and trees. On the left side, there is Miyashige Inari Shrine, which houses the deity of business prosperity. There is also a building called Amasha, which is said to be beneficial for eye diseases.

■ The Grounds of the Shrine are Awash with Rabbits! It has been said that "usagi" (rabbits) are messengers for the deities of this shrine, and the reason for this is still unknown. One theory states that there were many wild rabbits living around the shrine, so there are many sculptures, statues and pictures of rabbits around the shrine! First are the "Koma Usagi," 2 statues of rabbits sitting adorably in front of the main hall. On the right side of the front face of the main hall, there is a opened-mouth male rabbit and on the left side is a closed-mouth female rabbit. Petting their heads and praying for marriage and a married couple's compatibility is a common custom. The surrounding area of the main hall is not the only place that has plenty of rabbits. In the chozuya (a building for purifying your hands before praying), there is a statue of a black rabbit looking up at the moon. This rabbit is called "Kosazuke Usagi," and it is customary to splash water on the statue and rub its belly which is beneficial for having children and the safe delivery of children. There are still other rabbits hiding all over the grounds in unexpected areas, so the fun part of visiting this shrine is finding these hidden rabbits! ■ Let's get some Usagi Juyohin! "Juyohin" means the blessing of items, like charms and omikuji fortunes which are offered at the shrines. They are available for purchase by offering money to the deity. The blessed items from Okazaki Shrine are very popular because of the adorable rabbit motif, especially the large variety of omamori charms which are beneficial for things like passing an exam and having good health. There are unique omamori such as the "Usagi Mikuji Omamori" which include the fortunes and cost 500 yen, as well as the "Fukumimi (big ears bestowing good fortune) Mamori" for 1,000 yen. The Fukumimi Mamori is a blessed charm so that you might have fortune from sharing benefits granted to rabbits with large fukumimi ears. They also offer a variety of items like the"Usagi Ema" (rabbit votive) for 600 yen, another amulet for the safe delivery of children called "Anzan Kigan Ofuda" for 1,200 yen, and "Usagi Dorei" (ceramic rabbit bell) for 500 yen at the shrine office which, when facing the Main Hall, is located on the right hand side. Please stop by after you have finished praying!

■ What are the Benefits of Omamori? Originally, people regarded this shrine as important for protecting the emperor, his court, and its citizenry. At the same time, it has also been famous for granting blessings for having children and their safe delivery. Also because of a Japanese mythology hero, this deity shrine was said to be a place that blesses marriages, and therefore, many couples chose this location for their wedding ceremony every year. Wanting to share the benefits of this shrine, a staggering amount of amulets, including those for the safe delivery of children, are hung at both the main hall and the chozuya. Amulets are offered at the shrine office and what you need to do is write down the date and contents of your wish and your name, and then just hang it with the others. If you feel that praying for something would help, why don't you try it?

Okazaki Shrine is a prestigious shrine, but because of the adorable rabbits it is also a friendly spot. There is a bus stop right in front of the shrine, and there is good access from Kyoto Station as well. In addition, it is located very close to shrines and temples like Heian Jingu and Nanzenji Temple. So please try to visit here when you come to the Okazaki area!