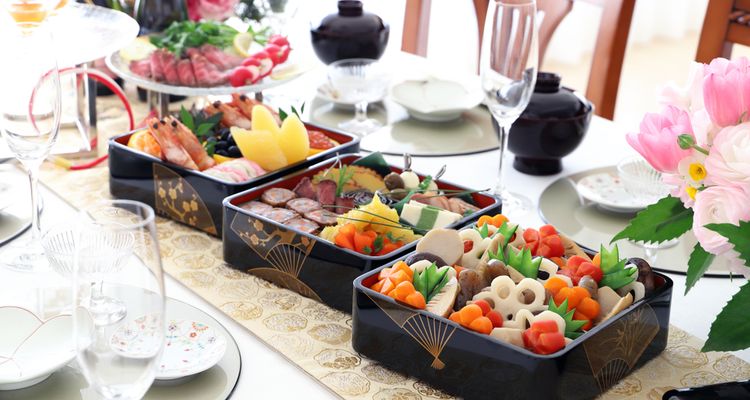 Ring in the new year with osechi ryori – one of Japan’s deepest and most delicious New Year traditions! This guide will introduce the various dishes found in osechi ryori, including the meanings behind each, as well as offer suggestions for where to get osechi, how to make it, and how to eat it.

What is Osechi Ryori? 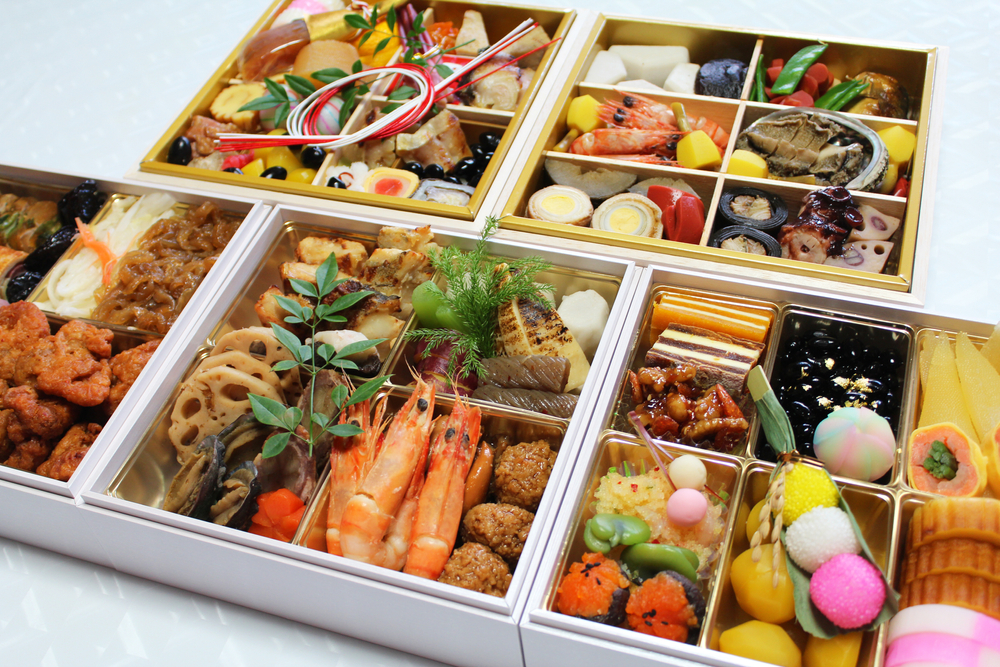 Osechi ryori is a traditional Japanese cuisine that is served during the New Year holiday. It is comprised of a large number of small dishes, typically served cold in a multi-tiered lacquerware box called a “jubako.” Each of the mouthwatering dishes has a different meaning and is said to represent a New Year wish.

The Origins of Osechi Ryori

Osechi ryori’s ancient origins can be traced to the Nara period (710 – 794), when special ceremonial banquets celebrating the changing of the seasons, called “sechie,” began to be held at the imperial court. Taking place five times per year (including on New Year’s Day) during “gosekku” (the five festivals), these banquets became quite extravagant during the Heian period (794-1185). 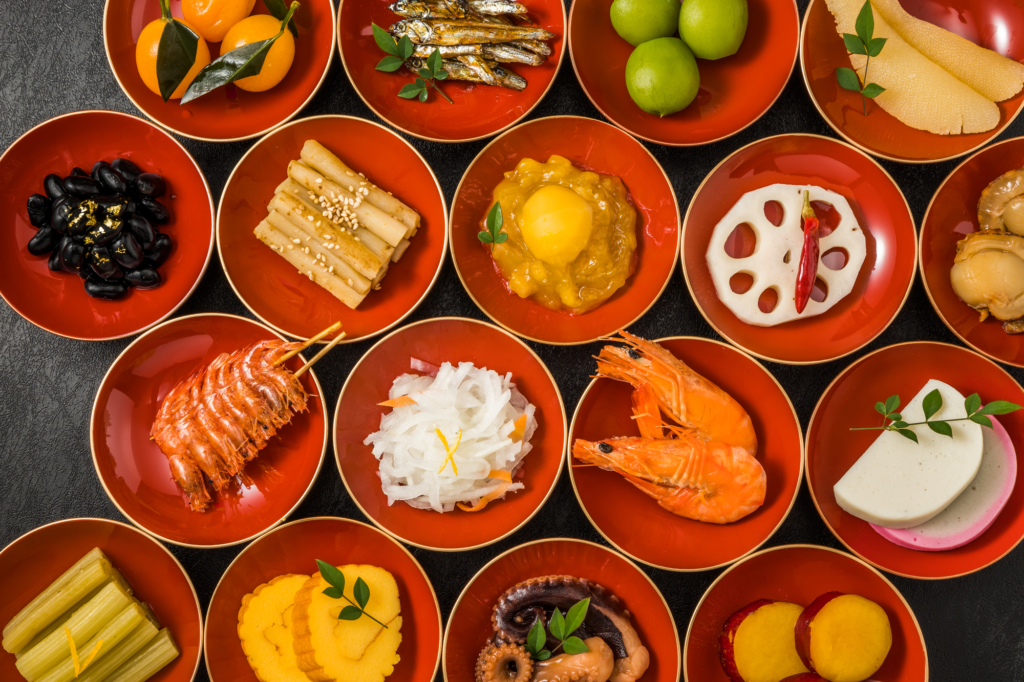 These ceremonial banquets were enjoyed exclusively by the nobility until the Edo period (1603 -1868), when the five festivals were officially designated as holidays and the tradition finally spread to the masses. Although not originally limited to one occasion per year, osechi eventually became associated specifically with the New Year holiday, and the association has continued to the present.

These days, osechi ryori provides an outlet for families to pause their busy lives, catch up, and share the first day of the new year together. If you’re spending New Year’s in Japan, impress the locals with your knowledge of osechi ryori and greet the new year washoku-style! 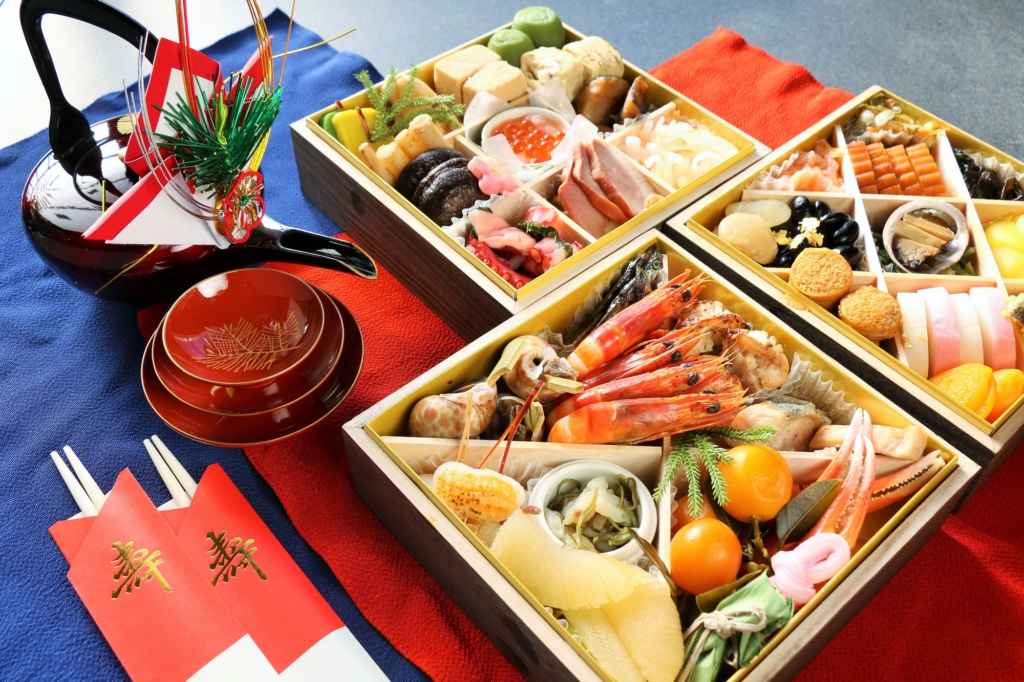 While the contents of your jubako will depend on size and quality, you can rest assured that most of the helpings will be from the following list! 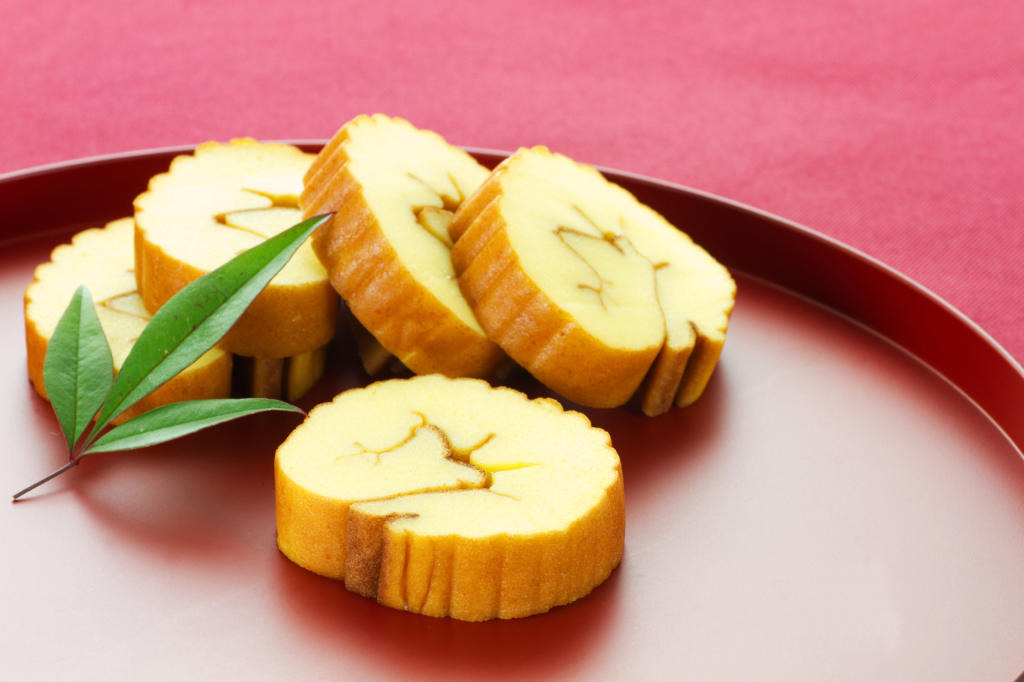 Datemaki are sweet omelet rolls blended with fish paste. They resemble ancient scrolls and are believed to bless families with education and knowledge. 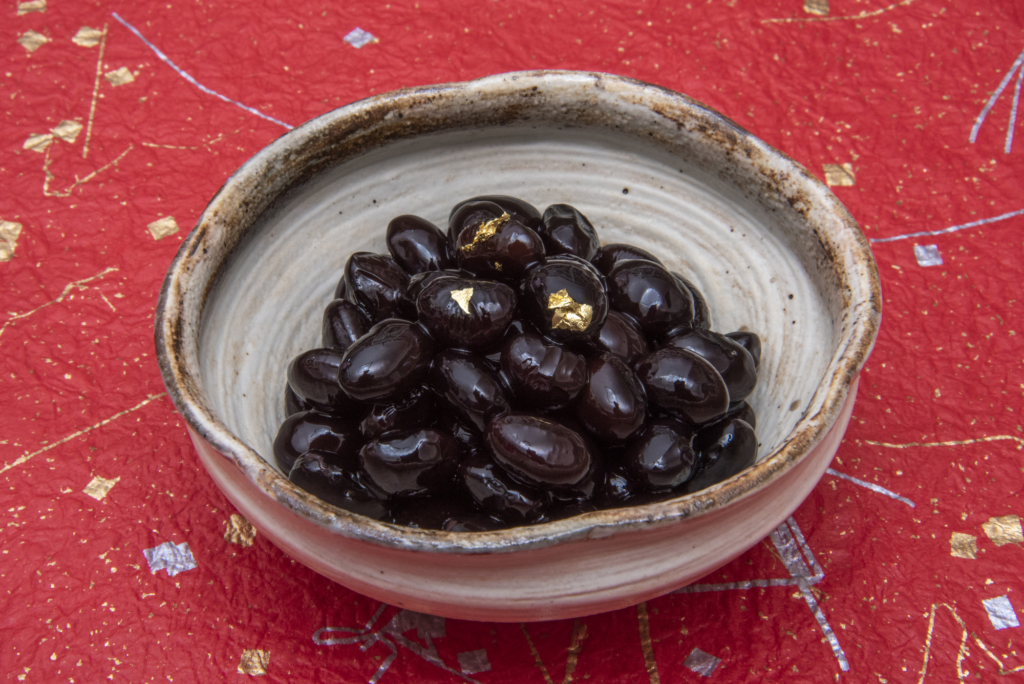 Kuromame are sweet black soybeans that bring health for the coming year. Their soft and satisfying texture makes them a popular offering! 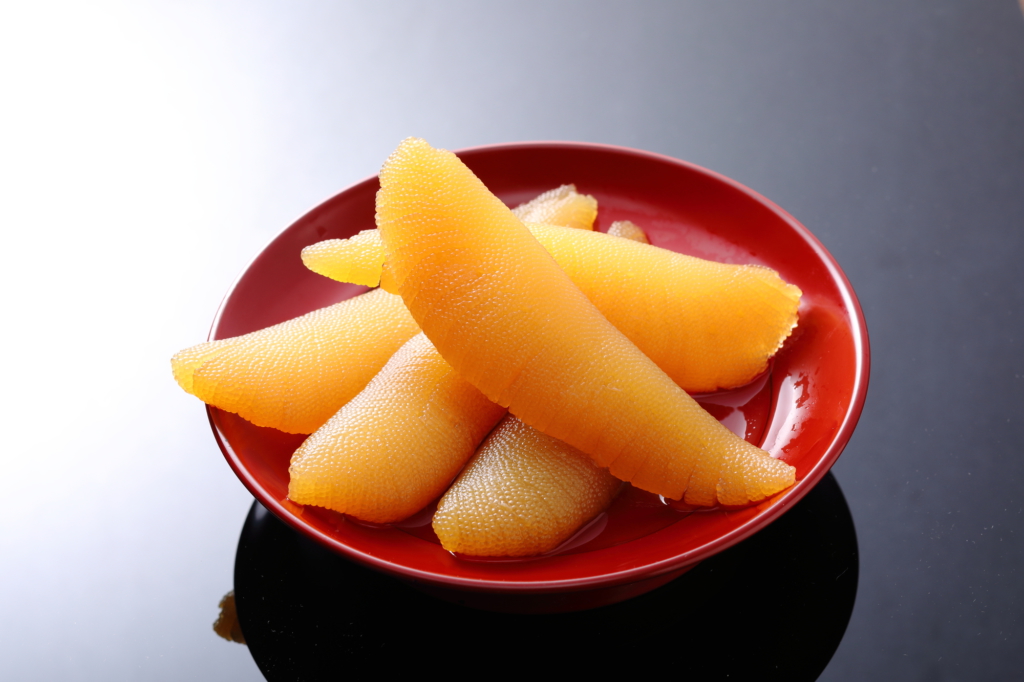 Kazunoko are crunchy strips of yellow herring roe marinated in dashi (soup stock). Translating as ‘a number of children,’ they are literal symbols of a large, prosperous family. 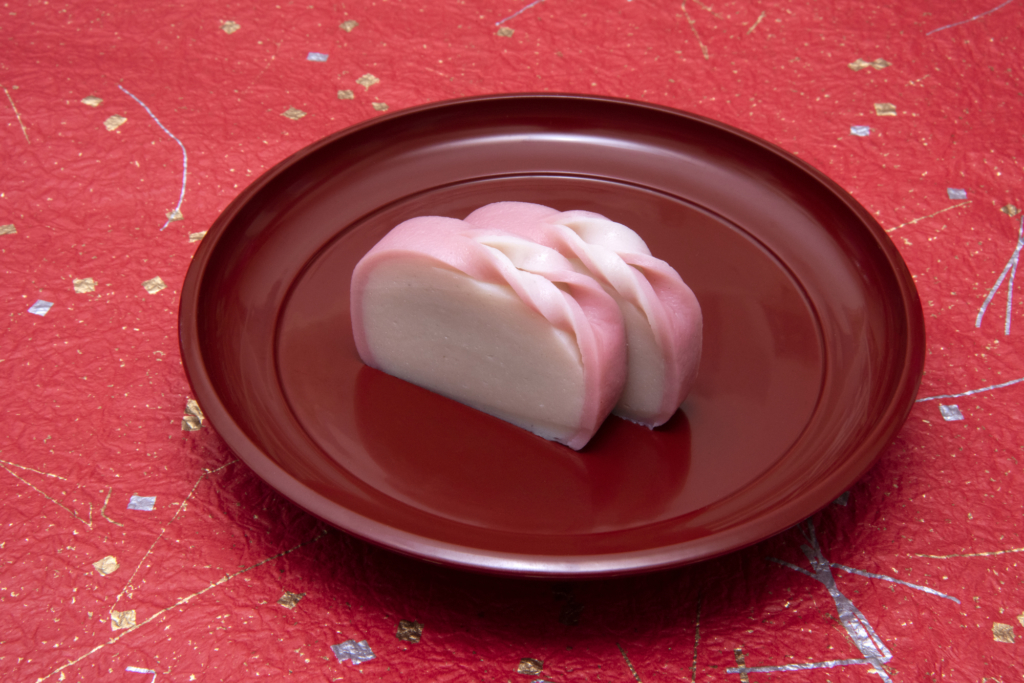 Kamaboko are scrumptious fish cakes enjoyed year-round throughout Japan. As they are colored red and white (Japan’s New Year colors), they are essential additions to osechi. Red and white colors have been used for decoration at special events in Japan since ancient times, and it is said that white represents a new beginning, while red represents felicitations.

While kamaboko is usually sliced in a simple way, New Year renditions are often cut into intricate designs such as animals of the Chinese zodiac or into a braided pattern as shown in the photo. 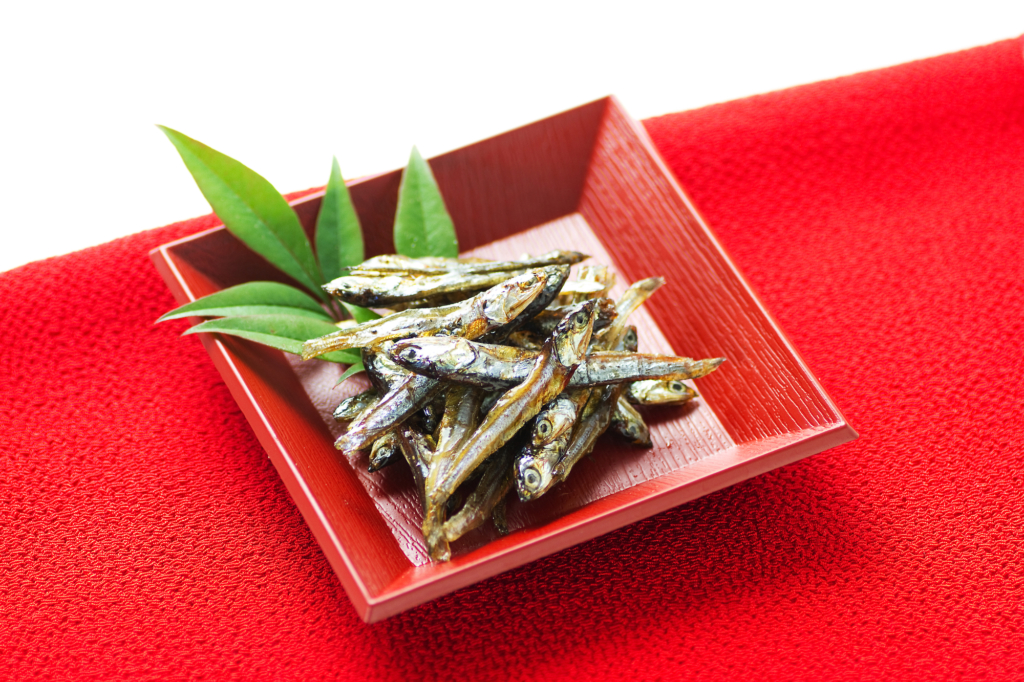 Tazukuri are baby anchovies soaked in a soy sauce glaze. Their name, literally translating as ‘rice field making,’ comes from their former use as fertilizer, and thus they’ve become a symbol of prosperity and abundance. 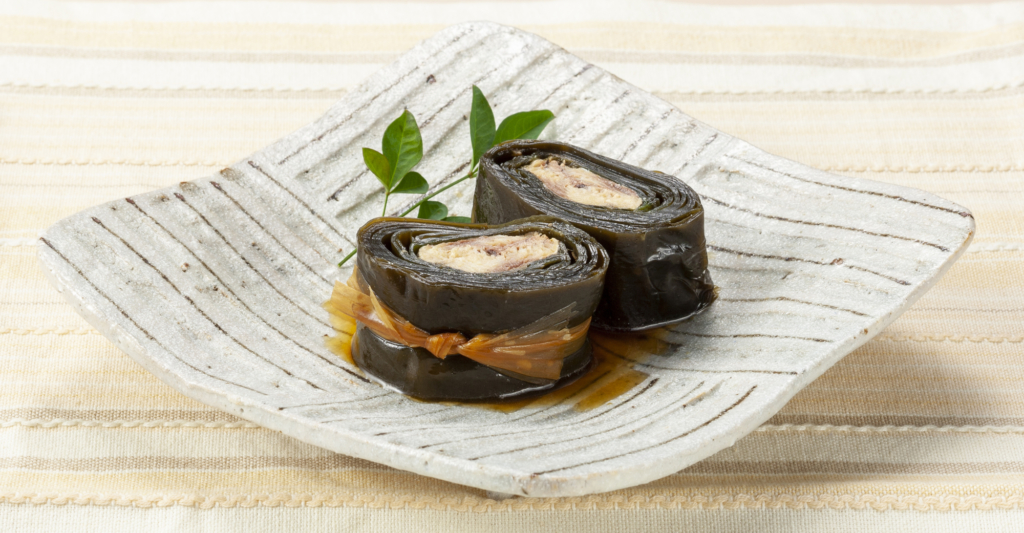 These delectable rolls of salmon wrapped in kelp and tied with gourd represent youth, so it’s fitting that they are often the first thing snatched by hungry kids! 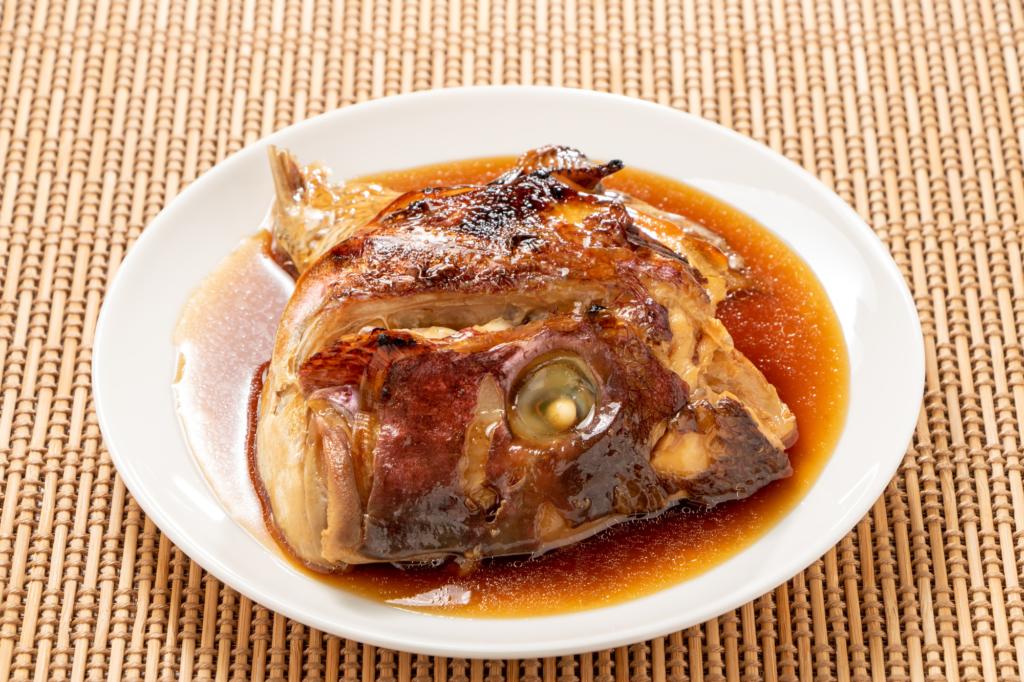 Two varieties of fish, tai (sea bream) and buri (Japanese amberjack), often make their way into an osechi platter. Tai is included as its name is similar to the Japanese word medetai, meaning ‘joyous.’ It is either cut in strips or kept whole and grilled. Buri, which is often enjoyed as sashimi, is a shusse-uo fish, which means its name changes as it matures. The word ‘shusse-uo’ uses the same Japanese characters as the word shusse, meaning ‘success in life,’ making the fish a vital part of osechi blessings. 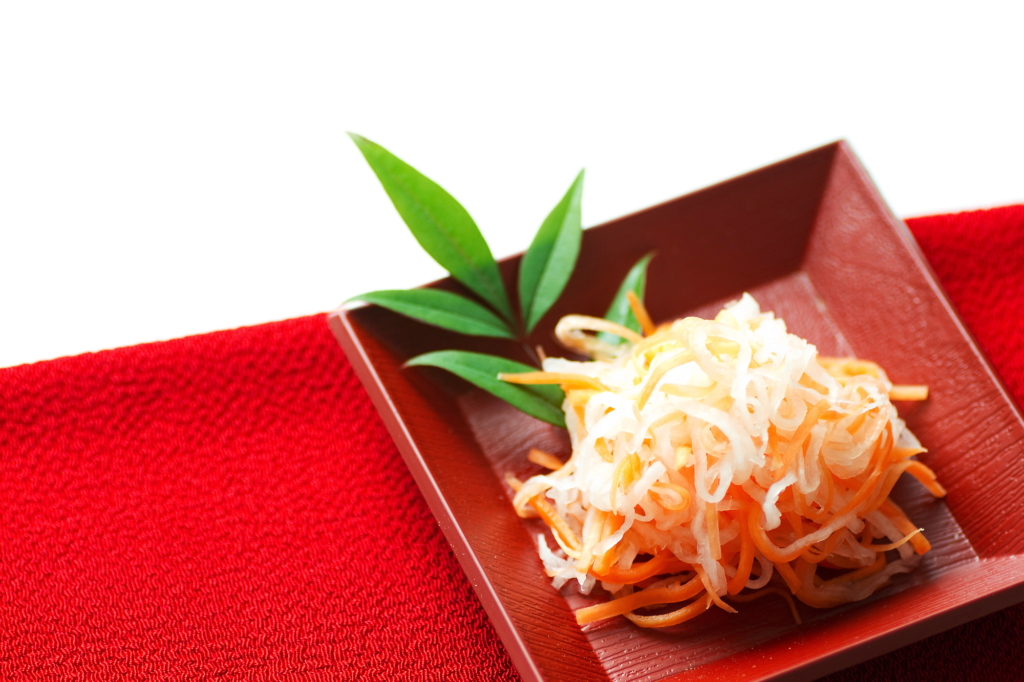 Kohaku namasu is a simple dish of pickled and shredded carrot and daikon (white radish). In addition to keeping with the red-and-white New Year’s motif (indeed, ‘kohaku’ means red and white), these root vegetables signify the deepening of family bonds. 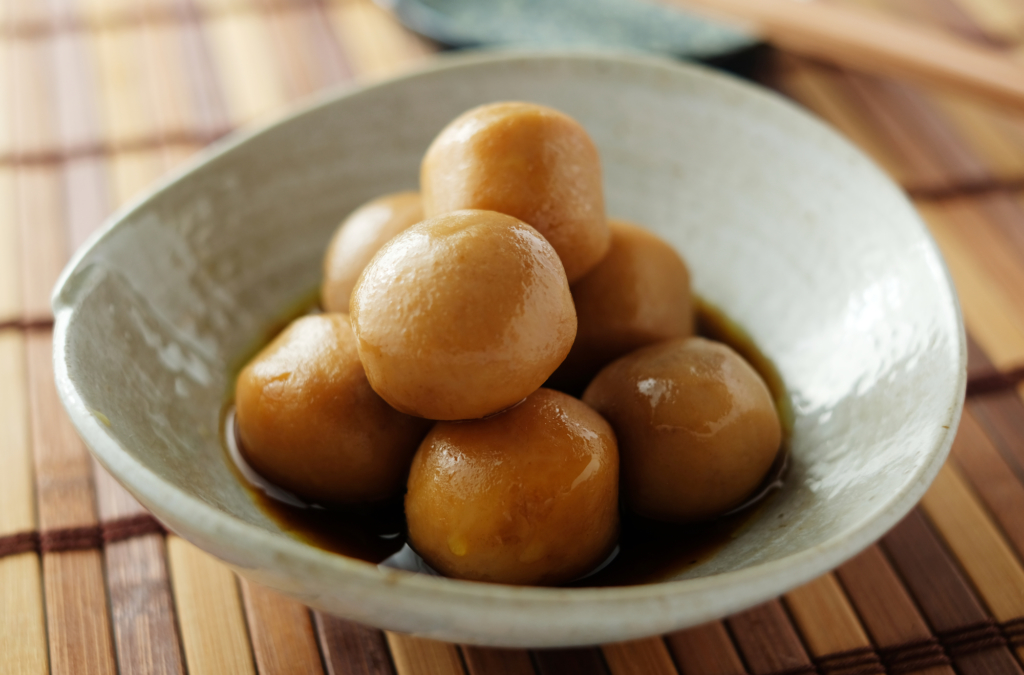 A variety of Japanese taro potatoes, satoimo are simmered in dashi and soy sauce until soft and juicy. As many potatoes spawn off a single plant, satoimo embodies the blessing of fertility. 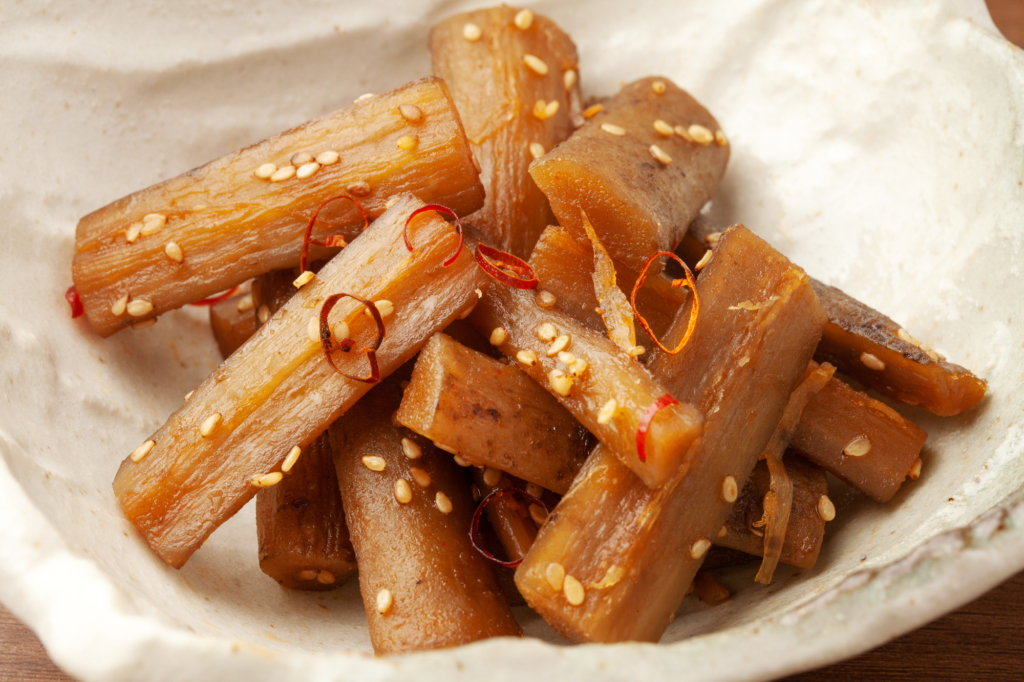 Tataki gobo are burdock roots pounded, seasoned, and cooked to perfection. Earthy and sweet, they grow deep into the ground and represent family ties and strength. 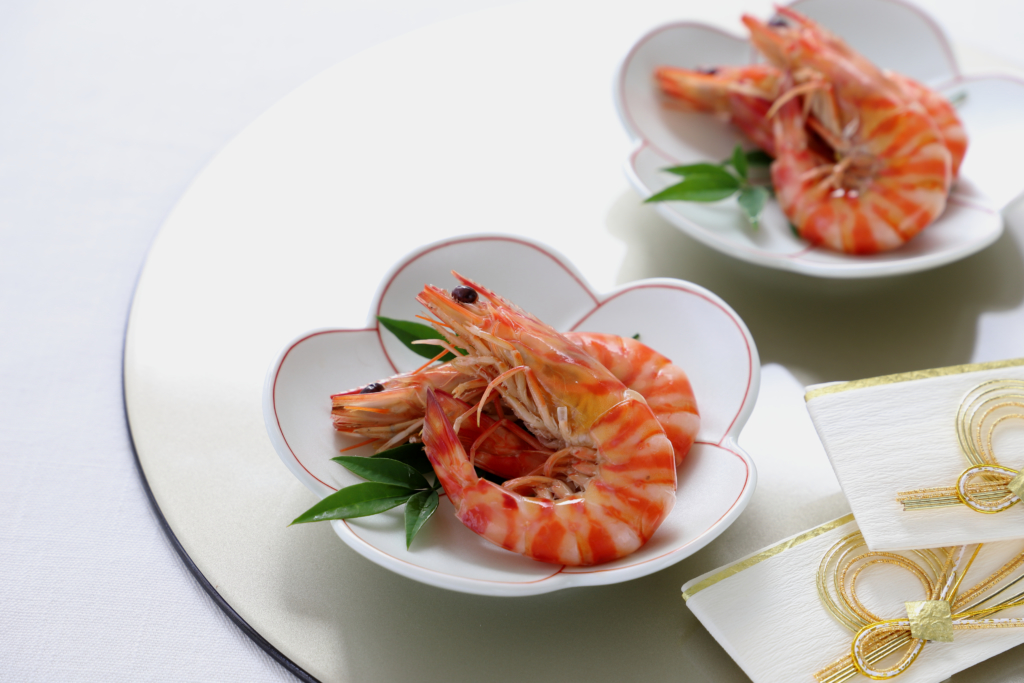 Delicious Japanese shrimp are included as their arched figure resembles the backs of old people, thus representing longevity and wisdom. 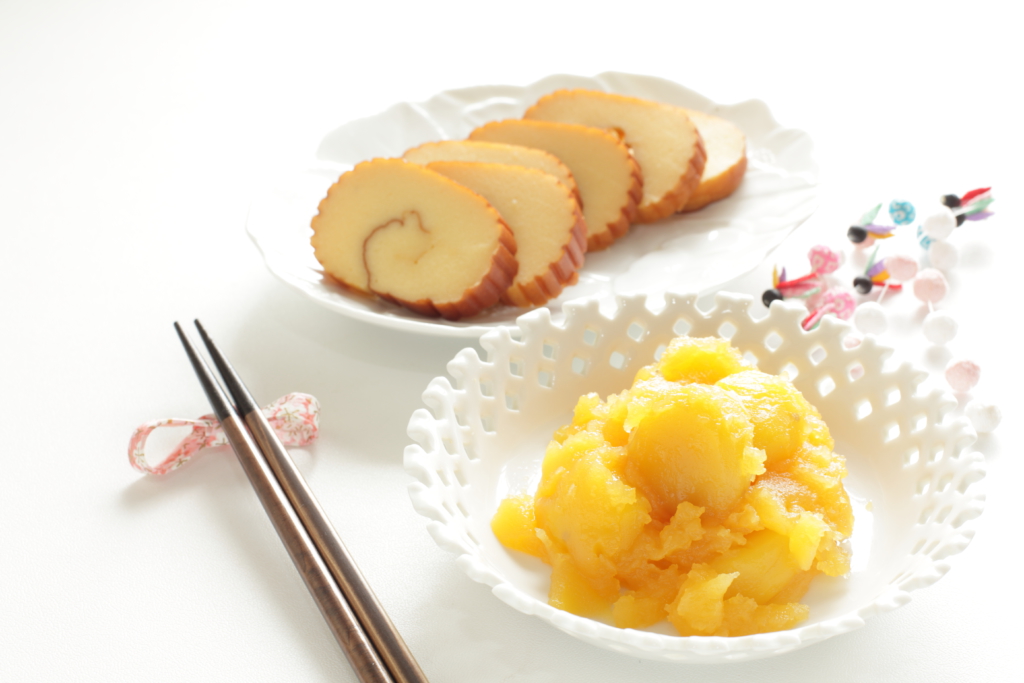 Kuri kinton are candied chestnuts enjoyed alone or mixed with sweet mashed potato. Their golden color and shape resemble the oval koban coins once used in Japan and are therefore attributed to wealth and fortune. 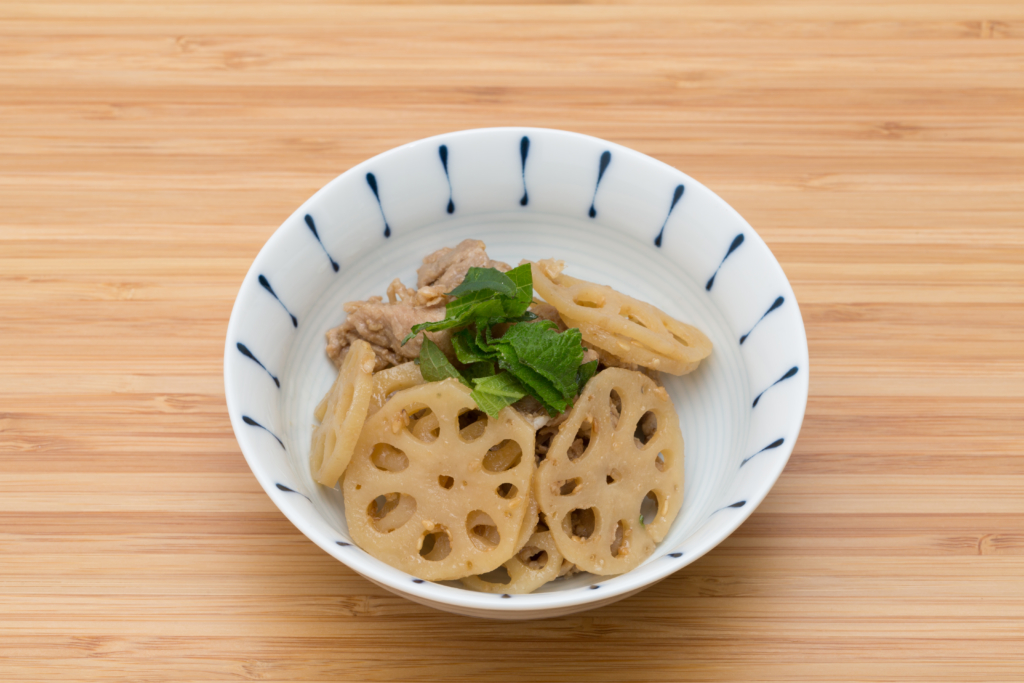 Crunchy, sticky, sweet, and bitter, these beautifully-shaped pieces of pickled lotus root are filled with small holes allowing you to look through them as you eat. These holes are also believed to grant families the power to predict and avoid future predicaments.

All Kinds of Other Foods!

Modern osechi ryori has grown beyond its humble, non-refrigerated origins to include an exciting range of both extravagant and junk-food add-ons! Even western foods like ham and olives are now a common sight. Additionally, most regions of Japan have their own unique osechi styles, particularly Kanto and Kansai, so don’t be surprised if you spot a few things you weren’t expecting! Just go with the flow and chow down! 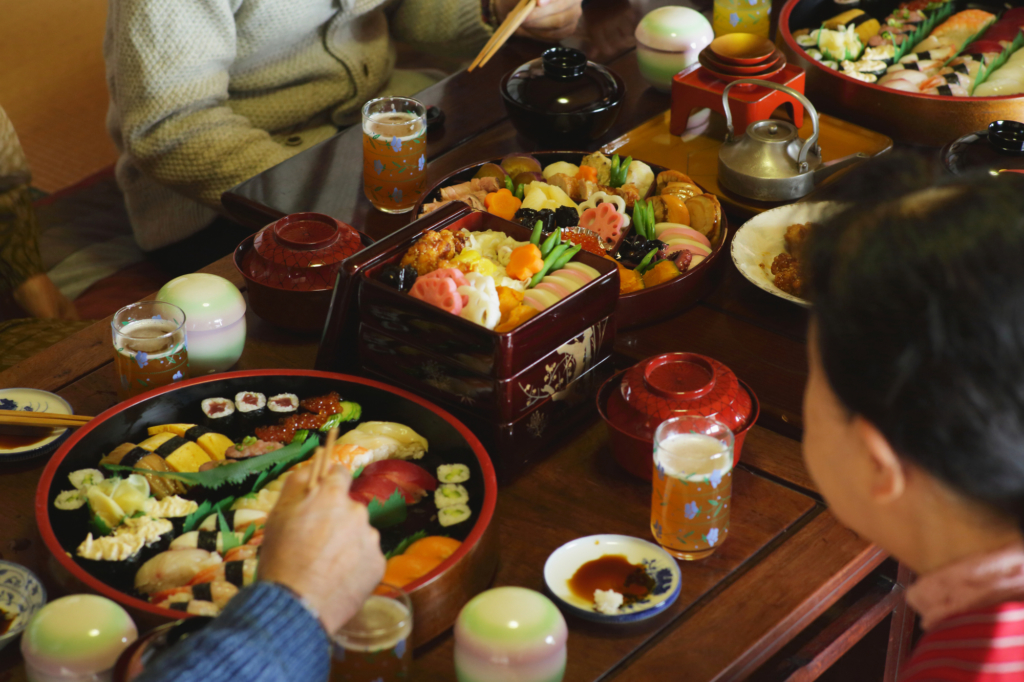 In addition to osechi ryori, there are a few other classic Japanese New Year’s foods that are worth mentioning. 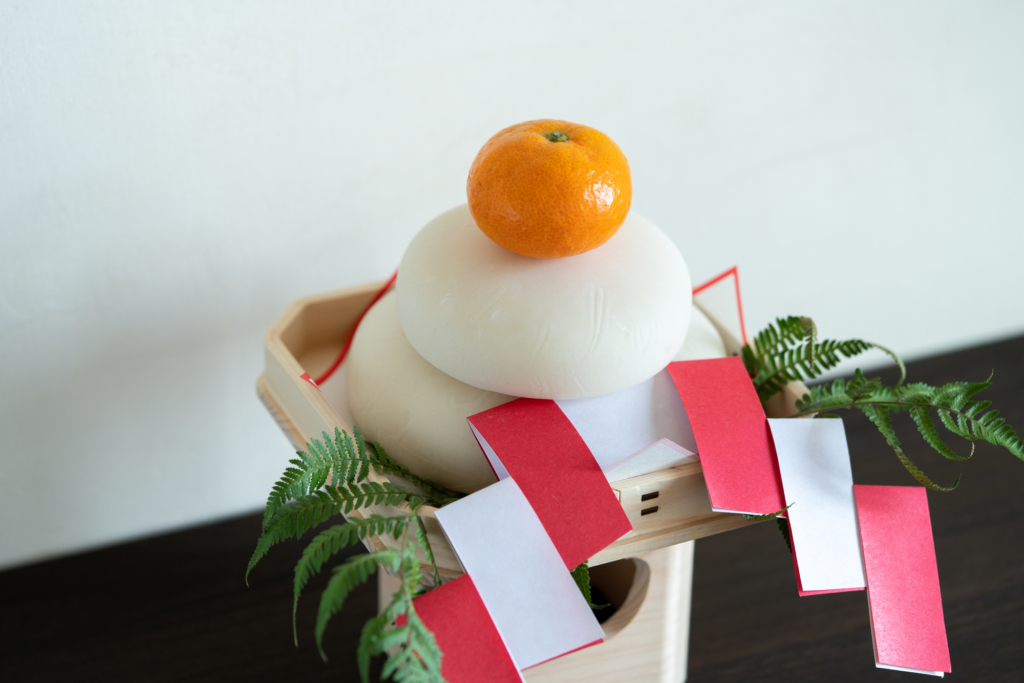 Bitter and cute Japanese daidai oranges are seen at New Year’s, as the word daidai also means ‘from generation to generation.’ They are often placed upon kagami mochi (pictured above).

While not included in osechi ryori, kagami mochi are an integral part of New Year celebrations. Translating as mirror mochi, two or more differently-sized mochi are stacked and crowned by a daidai orange. This set is then rested upon a sanpo stand and placed in a family’s Shinto altar or tokonoma (alcove). This ritual is said to protect homes from fire, along with embodying the connection between the new and previous year. 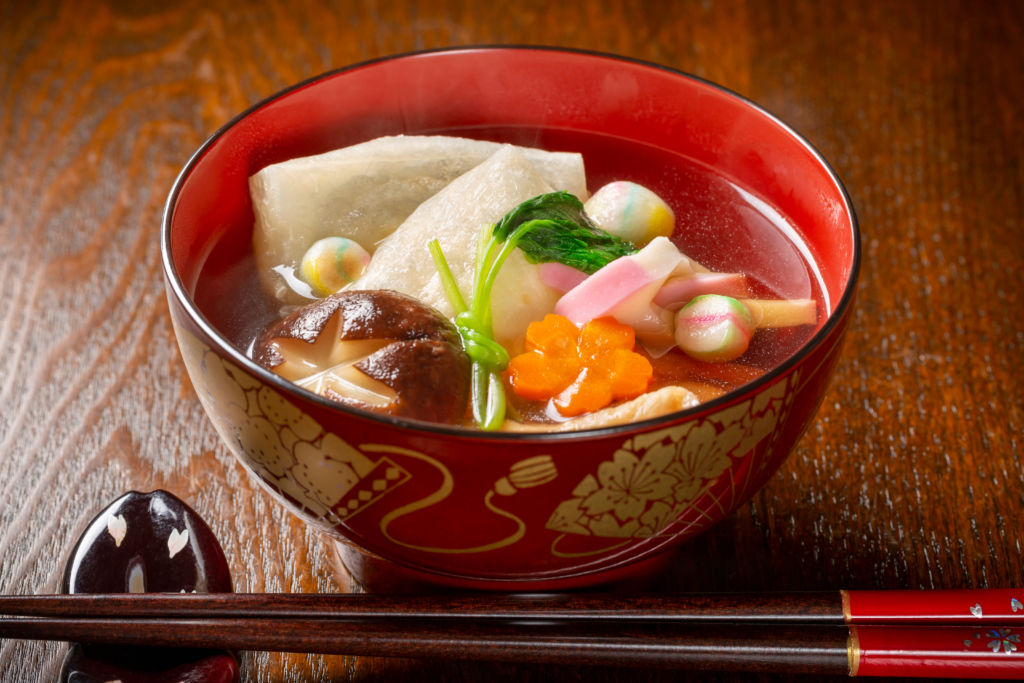 New Year mochi soup, known as ozoni, has a history beginning in the 1440s. Traditionally, this soup would incorporate the mochi left at temples the previous night as a New Year’s Eve dedication to the gods. Once a healthy helping of vegetables is thrown in and boiled, this hearty soup is designed to be simple and stress-free, allowing the cook of the family time to relax. Many households will make a simple version with nothing more than mochi in it, just for tradition’s sake.

Where to Get Osechi Ryori

To accommodate the busy modern family, osechi ryori is commonly ordered in advance from a combini, department store, or restaurant and delivered around New Year’s Day. Osechi preorders can typically be made as early as September or October, and the earlier you act, the lower the prices will be.

A particularly convenient option that many people utilize nowadays is ordering osechi online from a site such as Rakuten, Amazon, or the Takashimaya department store’s website. There are a dizzying array of options available at various price ranges, so there is guaranteed to be the perfect osechi set for you.

While a standard set goes for around 20,000 yen, budget-friendly versions of 5,000 yen or less are also available. If you want to eat out, restaurants serving freshly-made osechi platters can be found throughout Japan. They are often popular, so best to book in advance! 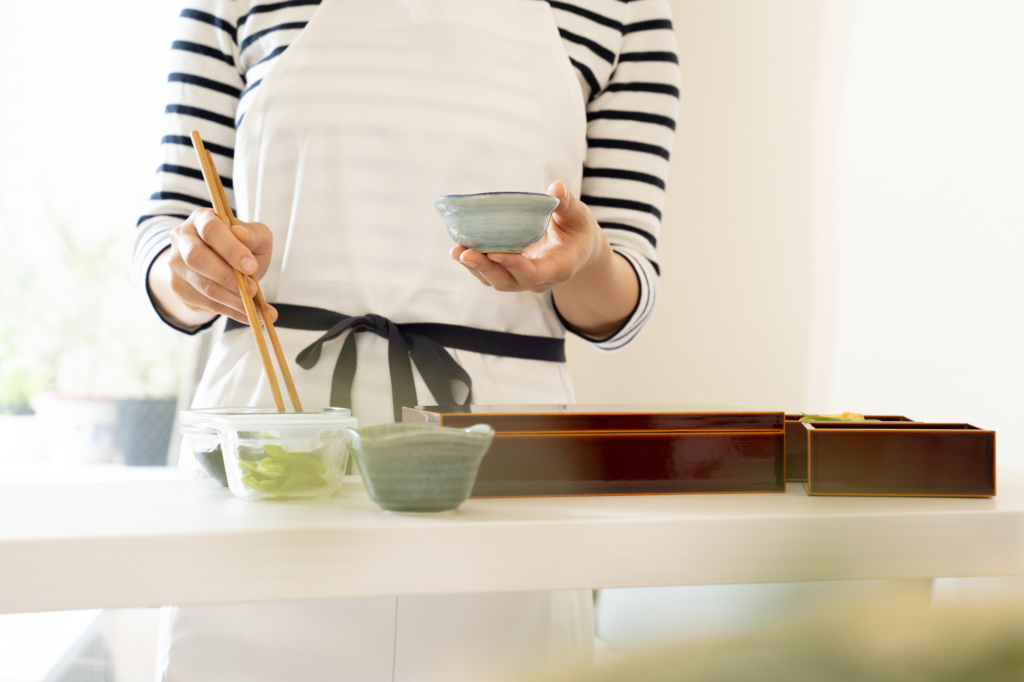 How to Make Osechi

Osechi is notoriously time-consuming to make, typically prepared days in advance. If you choose to take on the challenge of making your own, be prepared to put in some work!

While we encourage creative cooking, if you want to make a truly authentic osechi set, you’ve got to follow the rules! Start by acquiring a 3, 4, or 5-tiered jubako box, which you can find for as cheap as 1,000 yen. Each tier of the box should be filled with either 3, 6, or 9 different ingredients. If you have a 3-tiered box, the highest level should feature otsumami (appetizers), like kazunoko, tazukuri, and kuromame.

The middle should contain fried and pickled dishes like fish, shrimp, and kohaku namasu. The bottom layer is for simmered food, like renkon and satoimo. If you have a 4 or 5-tiered box, separate the fried and pickled dishes into their own layers while keeping the bottom layer free to be filled by blessings from the gods. For more information on how to cook each dish, Just One Cookbook has lots of easy to follow osechi ryori recipes:

If you want to go the extra mile, purchase some iwaibashi celebratory chopsticks! Their unique double-pointed ends symbolize the sharing of your meal with the gods, so you’ll never be eating alone! 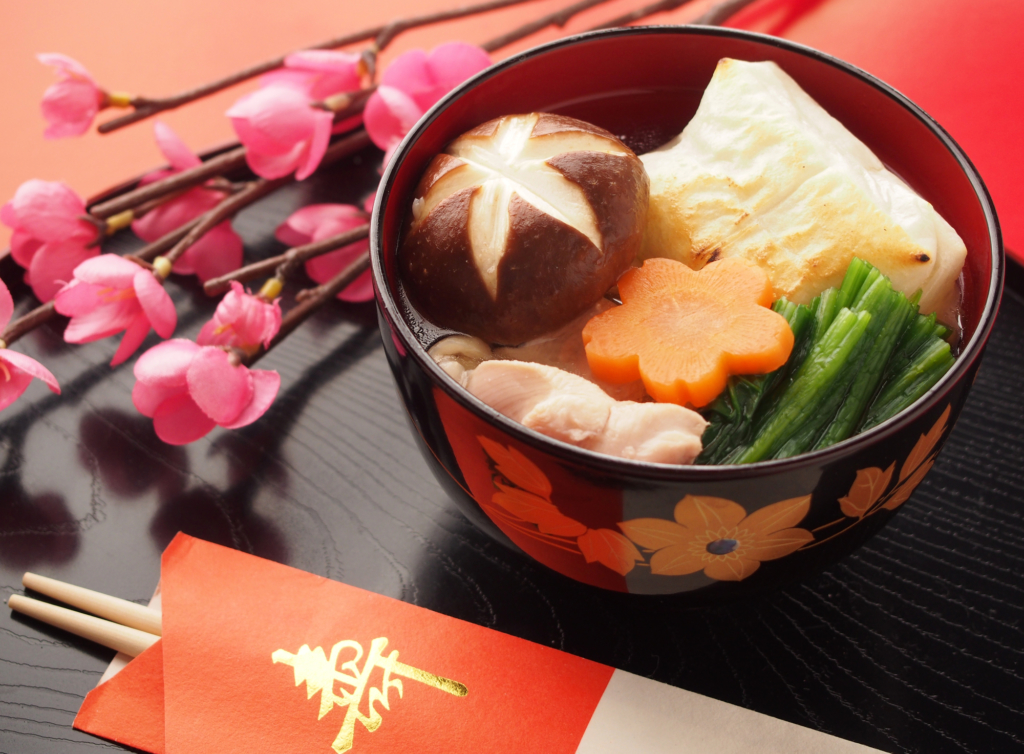 How to Eat Osechi Ryori

So, you’ve been invited to celebrate shogatsu (Japanese New Year) at a Japanese household. How lucky! If you want to impress your hosts, make a note of these simple osechi ryori manners! 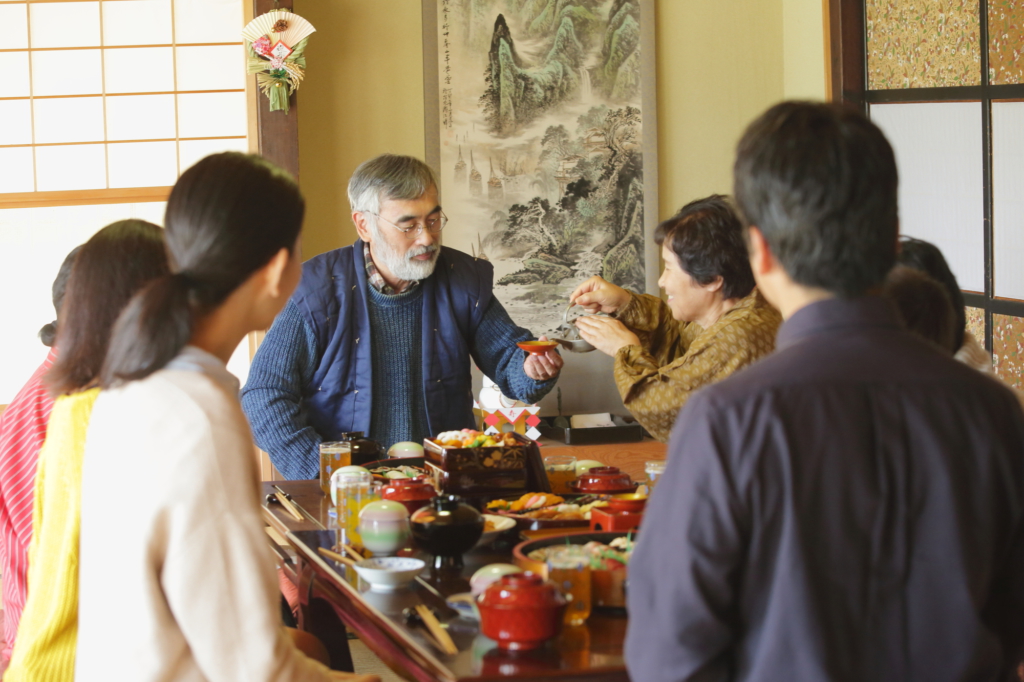 1. Always allow the oldest to pick their food first.

2. Start eating from the edge of the jubako and make your way inwards.

3. Don’t eat straight from the box. Pick up your desired piece and place it on a small torizara plate before eating it.

Of course, as anyone who has lived in Japan knows, the average modern Japanese family is very loose on traditions, so don’t stress! The most important thing is having fun and enjoying this delicious and fascinating cuisine!

This has been an overview of osechi ryori, one of the classic parts of a Japanese New Year’s celebration. Although the flavors may not be everyone’s cup of tea, osechi is something that everyone should try at least once!