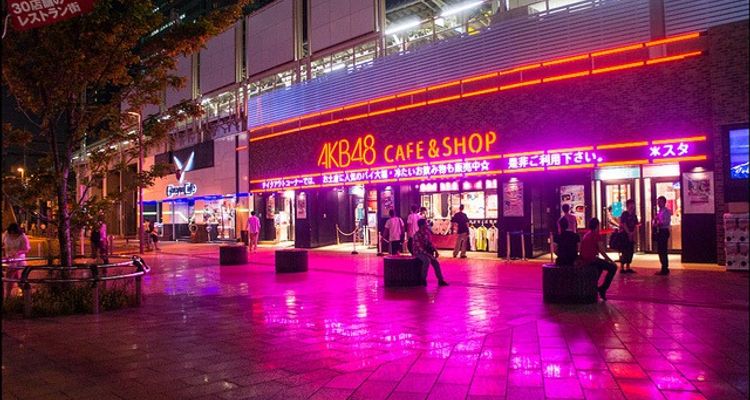 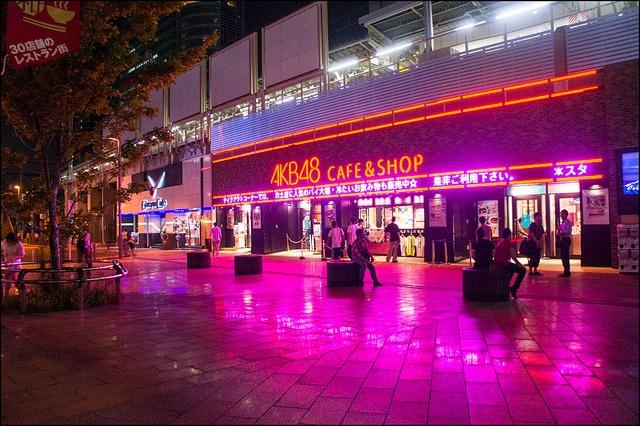 A Beginner's Guide to the 48Group Family

How much do you know about AKB48? Nothing at all? Well, stop here and learn the basics about them! If you follow Japanese pop culture, there's one name you have most likely heard over and over again: AKB48. You might be thinking to yourself that they're just an idol group with way too many cute girls. Well, they're more. In Japan, these girls are truly a national symbol for the country, but wait! There's more! There's SKE48, NMB48, HKT48, and even JKT48 and SNH48! So, what's the difference? Just who are these idols? Do they just sing and be cute all the time? To any casual person, the 48G might seem to be very overwhelming, and you might be interested but don't know where to start. Let's start with the basics and build it up. Today, I will be introducing you to Japan's national daughters.

What is an idol?

So before we dive into the 48 Group Family (48G for short), let's discuss the differences between an idol in Japanese culture and an idol in Western cultures. If you ask a typical American about idols, the first thing that will usually come to mind is the hit TV series American Idol. The association then becomes that an idol is a musical star that is high up on a pedestal above normal citizens. Maybe the American will say that an idol is a person who he/she greatly admires. However, Japanese people have a unique idea of what an idol is like, thanks in part to Korean pop and idol units in Japan. Japanese people see idols as cute and attractive girls or cool guys who sing, participate in variety TV shows, perform on-stage, and appear in all forms of media from commercials to magazines.

Fandom in Western cultures is very different from fandom in Japan. Due to the majority of Japanese people working as salarymen/women, that doesn't leave them with much free time. So they then choose hobbies and really invest in them. Japanese entertainment companies understand this mentality and feed off of it by giving their products, in this case idols, more exposure, which means that idols are not JUST singers in Japan. They sing, perform shows, appear at major events, appear in TV variety shows and commercials, do photoshoots for magazines, get involved in campaigns with other companies, interact with fans at handshake events, appear in dramas and movies, host radio shows, and essentially encompass the entire entertainment world in Japan. It is difficult to go to Japan and not notice them. The 48G has become such a commonplace sight that most Japanese people expect to see on TV and giant billboards.

So, the takeaway message from this section is that an idol in Western culture is fairly different versus an idol in Japanese culture. Therefore, in order to discuss Japanese idols, it is important to establish the difference and keep a Japanese mindset when going forward.

Who is AKB48? Why are there so many letters involved in this group?!

The 48G is a Japanese idol girl group that consists of AKB48, SKE48, NMB48, HKT48, JKT48, and SNH48 with the concept of "idols you can meet" who perform daily. The 48G consists of AKB48 as the big sister group to all of the other little sister groups. The "48" part of their name refers to the original number of members who debuted in AKB48. Perhaps the most misunderstood concept of the 48G is that it is ONLY AKB48. To explain why this is a misconception involves a little geography lesson. I only mean to provide a brief synopsis now, and in the future, I will cover each group more in depth.

• AKB48 is the original 48G unit that was produced by Yasushi Akimoto, affectionately called Akimoto-sensei by the 48G members or Aki-P by the fans, back in 2005. AKB48's local theater is located in Akihabara, Tokyo. AKB48 is named after AKihaBara. AKB48 currently consists of 5 teams: Team A, Team K, Team B, Team 4, and Team 8. AKB48 is generally the most famous of all groups due to being the oldest group and the group that is given the most exposure to media.

• SKE48 is the first sister group of AKB48, and its first generation of members was announced in 2008. Aki-P wanted to make his concept of "idols you can meet" spread nationwide, and at the time, the opportunity to open another theater presented itself in Sakae, Nagoya. SKE48 is named after SaKaE. SKE48 currently consists of 3 teams: Team S, Team KII (not to be confused with Team K of AKB48), and Team E. SKE48 is generally famous for their strong dancing and powerful performances. • NMB48 is the second sister group of AKB48, and its first generation of members was announced in 2010. Aki-P was already seeing success with AKB48 and SKE48, so why not continue to spread the success? NMB48 opened its theater in Namba, Osaka. NMB48 is named after NaMBa. NMB48 currently consists of 3 teams: Team N, Team M, and Team BII (not to be confused with Team B of AKB48). NMB48 is generally famous for their comedy.

• HKT48 is the third sister group of AKB48, and its first generation of members was announced in 2011. HKT48 consists of the 48G's youngest members and is also the youngest sister group. HKT48 opened its theater in Hakata, Fukuoka. HKT48 is named after HaKaTa. HKT48 currently consists of 2 teams: Team H and Team KIV (not to be confused with Team K of AKB48, Team KII of SKE48, or Team KIII of JKT48). HKT48 is generally famous for their young talent and their cute aura.

• JKT48 is the first international sister group of AKB48, and its first generation members was announced in 2011, thus technically putting them slightly ahead of HKT48. Aki-P noticed the growing fanbase in Jakarta, Indonesia, and he wished to take advantage of a growing economy before other Japanese companies did. Aki-P introduced the Japanese business style into Indonesia and had almost all of JKT48's business model modeled after AKB48's. Therefore, JKT48 opened its theater, which is incredibly similar to the AKB48 theater in Akihabara, in Jakarta, Indonesia. JKT48 is named after JaKarTa. JKT48 currently consists of 2 teams: Team J and Team KIII (not to be confused with Team K of AKB48, Team KII of SKE48, or Team KIV of HKT48). JKT48's members are mostly Indonesian girls, but several Japanese members have been sent to JKT48 as a kennin, or exchange member. Most songs are translated into Indonesian.

• Kenkyuusei are research students who have passed the initial audition and work as understudies to each respective group. Each sister group has their own Kenkyuusei team. When a member of the sister group announces her graduation, a kenkyuusei is promoted to the team.

• Each sister group has its own subunits that usually consists of several of that group's members. These subunits produce music separate from the overall group and often act as separate entities.

But there are SO MANY OF THEM! How do people recognize and remember them all?!

The short answer to this is that most people do not. Sure, there are people who are really invested in the 48G, but most people will only know the Center, the Ace, and/or their Oshimen. The 48G fandom is also a complex one, which will be discussed in the future as well but is currently out-of-scope for this overview.

Before moving on, let's address some vocabulary!

So who are some members I should know about?

To explain this would require a bit of a 48G history lesson, so I will reserve this section for each group's respective articles. Being an entertainment company, there are, of course, certain rules and policies. The most well-known policy is the 48G's no-dating policy. However, this policy is not an official one, as stated by Aki-P on several occasions. Yes, this unofficial policy has been broken on some occasions, thus leading to scandals. Ok, they're cute and their songs are catchy. So what makes these idols so special?

Responses to this question would considerably vary. However, these idols are special because much like anime, manga, sushi, or karaoke, the 48G has become a symbol of Japan. They are very amiable, and many Japanese people adore them, no matter the age or gender. Yes, their songs are catchy, and that is by design to make a more marketable product for business. However, if one delves into the lyrics of some songs, one will quickly notice how strong the lyrics are. Aki-P also serves as the main lyricist for most of the 48G's music, and often, he incorporates the members' feelings and experiences into song lyrics, the best example of this being AKB48 Team B's song titled "Shonichi."

Personally, I think it's what makes these idols NOT so special. They are all relatable human beings who each have a different dream, whether it be to become an actress, singer, etc. Sure, their overarching job description is to make people happy, but often, that is the only side that casual fans see -- the happy, cheerful girls. However, the concept of "idols you can meet" has a greater meaning than what it seems. I believe that the concept should be changed to "idols you can relate to" because every now and then, there are small instances that remind us that these girls are also just normal girls trying to live their own lives and walk their own paths towards the future. As a fan, you can see how hard they work to gain fans and the different psychological complexes that they each develop. If you scroll back up to the beginning of this article, you might notice that I chose the cover to AKB48's album 1830m. Why did I choose this? Just because it's a nice picture of them? Well, if you go back and research the meaning of 1830m, you will know that it is the distance from the theater in Akihabara to Tokyo Dome in meters. Why is this title so important then? This was the first generation's dream and goal -- to perform at this venue. Implicit within this album title is the hard work that the members put into reaching this goal in 2012.

For me, my kami-oshi is Kitahara Rie (nickname is Kitarie). When she first came into AKB48, she was a perennial senbatsu member. However, due to recent generations upping the ante, Kitarie has slowly dropped in rankings year to year. One day, I watched an episode of AKB48SHOW! where she spoke one-on-one with Takahashi Minami, one of the original members and current General Manager. I, myself, suffer from chronic depression. In that episode, Kitarie revealed some fairly depressing thoughts, but what made me connect to her as a kami-oshi, even though I had liked her from before, was that she and I shared a similar depression. She's human, just like me, yet afterwards, she shared her personal goal via social media that she would not graduate with any negative feelings. When I see her try her best, it makes me want to overcome my own wall. To me, this is what a kami-oshi is.

Hopefully, this overall outline helps you become more aware and educated about the 48G. It's an interesting concept, so I hope that by reading this, you would have become more interested in "idols you can meet" and look forward to my future articles!