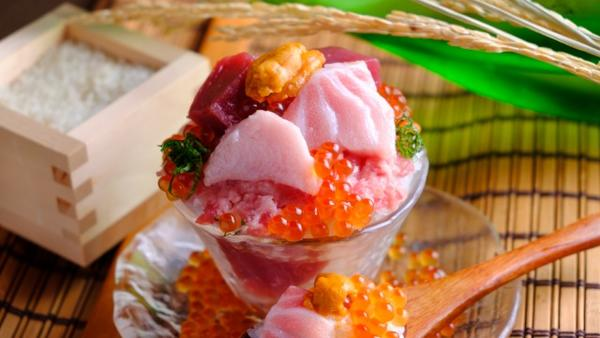 Michael Takadanobaba Branch - a unique izakaya (Japanese pub) that is only 10 minutes away from Shinjuku - has just started offering a reasonably priced way to eat raw tuna with a new, limited-time menu item. The Parfait-style Raw Pacific Bluefin Tuna Rice Bowl, which is also topped with uni (sea urchin) and ikura (salmon roe), is only available until September 30, 2018 (Sun), so make sure to grab one before it's too late!

This rice bowl consists of 6 different cuts of raw, domestic Pacific bluefin tuna (lean, medium-fatty, fatty, head, collar, and cheek), as well as an overflowing amount of uni and ikura.

This luxurious seafood rice bowl is available for the low price of 980 yen (plus tax). As you can see in the above photo, its appearance is truly as lovely as a parfait! You can even ask for more rice for no extra charge!

While You're There, Indulge in Other Delicious Dishes!

Those who wish to further explore the flavors of raw Pacific bluefin tuna can order the Raw Pacific Bluefin Tuna Sashimi (980 yen plus tax). This dish includes a variety of cuts - such as lean, medium-fatty, and fatty - that were carefully selected from that day's delivery of Pacific bluefin tuna. (The exact contents will depend on the status of the current stock).

Although sashimi is usually dipped in soy sauce, the restaurant recommends enjoying this particular dish with salt, as it will allow you to best taste the true flavor of the fish.

You will get to choose from the restaurant's daily stock of fish, which they will bring to your table so that you can see exactly what they look like before they're cooked. This is only possible at a restaurant that truly believes in the quality of its ingredients. Feast upon the freshness of the fish with your own eyes!

Once you choose a fish, the restaurant will either grill it whole with some salt or simmer it, depending on whichever is the absolute best way to prepare the fish. The picture above is of the simmered variety - the Simmered Fresh Fish (from 980 yen plus tax).

Other A La Carte Dishes

Just like what you'd expect from an izakaya, they also offer several a la carte dishes that pair well with sake (a type of Japanese alcohol)

Over 30 Varieties of Sake at All Times!

This izakaya carefully selects ji-zake (local sake) from all around Japan, from standard varieties to super rare ones. You'll always find at least 30 varieties in stock! If you have difficulty choosing which one to try, ask the friendly staff. They'll explain the flavors of each sake, as well as make recommendations that match well with your food.

A Retro and Relaxing Atmosphere

Michael is around a minute's walk from Takadanobaba Station. Just 10 minutes from Shinjuku, this area is usually bustling with salarymen and students. The Japanese-style interior is based on the idea of getting lost in an old traditional Japanese home, which is pleasantly nostalgic to many customers.

A Devotion to "Raw" Tuna

The Japanese term "nama maguro" (literally "raw tuna") doesn't actually mean that a piece of tuna hasn't been cooked, but rather that it has never been frozen. Around 80% of the tuna that is sold at fish markets is frozen, and the remainder is classified as "nama maguro".

Raw Pacific bluefin tuna is usually quite expensive, both due to its rarity and the difficulty of preserving its freshness. Compared to other tuna, Pacific bluefin tuna is exceptional for its fat distribution, meat quality, and how much its flavor differs depending on the cut. However, at this restaurant, you can enjoy it for a reasonable price.

If that sounds tempting to you, pay it a visit the next time you come to Japan!