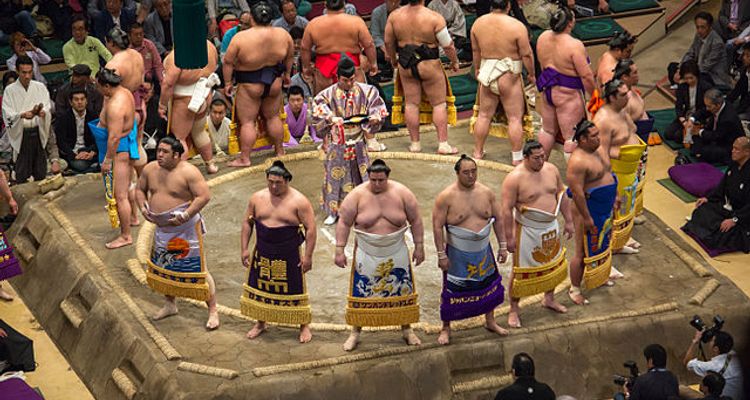 8 Ways to Enjoy the Sumo Experience in Japan

Sumo is not only a traditional sport, but is also part of the traditional culture in Japan. I will give you some tips so that you can fully enjoy the sumo experience!

It is well known that sumo is a traditional Japanese sport. You may watch sumo wrestlers on TV, however you may not know that much about them and even how sumo works in general. Watching a sumo match might be a great experience for you to really see and feel a big part of traditional Japanese culture. Here are some tips so that you can fully enjoy your sumo experience in Japan! 1.Are they real athletes? Some people might think sumo wrestlers are people who are just big and fat and thus decided to do sumo. However you might be surprised when you watch their power at sumo matches.

They have very flexible bodies, and most sumo wrestlers used to be good players of other sports like judo, basketball and so on. They seem to be very fat; however their muscles are very strong. Some sumo wrestlers' BMI (Body Mass Index) is around 10% just like other professional athletes.

Sumo wrestlers practice everyday to make their body strong. They have strong muscles deep inside their body and those muscles are surrounded by fat. Actually sumo wrestlers value this fat in order to protect their body from strong punches and slaps from their opponents. Sumo stables are managed by oyakata, or masters. At the sumo stable, all wrestlers  live in a same house. They all practice together, eat together and learn together. Most sumo wrestlers start their career when they are very young. Some of them become sumo wrestlers when they are just 15 or 16 years old.  The oyakata and his wife, the okamisan, support everything for the wrestlers. They are like the real father and mother to these young men.

3.How to see the ranking of sumo wrestlers At a sumo match, they divide all the wrestlers into 2 groups, East and West. All wrestler ranks have “East” and “West” in their titles, for example, East Yokozuna and West Yokozuna. East means higher level than West, so the East Yokozuna is actually the top sumo wrestler. The ranks in Makuuchi are as follows from top to bottom: Yokozuna, Ozeki, Sekiwake, Komusubi and Maegashira No.1 to No.16.

Yokozuna is the only rank which stays even if the wrestler loses the majority of the matches. However the Yokozuna should be the strongest wrestler out of the entire group. That's why, once a Yokozuna sees his strength waning, he will finish his career as a Yokozuna.

4. Where can you see the tournament? There are 6 tournaments, once every 2 months throughout the year. Three of the tournaments will be held at the Kokugikan in Tokyo. The others will be in Aichi, Osaka and Fukuoka. You can get the tickets in advance, or even on the day of the match if there is availability. There are 2 types of seats (box seats and arena seats) and the price range may vary depending on which seat you choose. If you really want to see the wrestlers up close, you might be able to get a ringside ticket. If you buy a ticket for a match from the sumo information offices, you can use a special entrance. You can choose tickets that come with souvenirs and bento boxes. Of course it is a bit pricey, however it would be worthwhile if you want a special sumo experience.

6. How to enjoy a sumo tournament When you visit a sumo tournament, there are many ways to enjoy it. You can explore the sumo stadium, see the sumo wrestlers very close to you, and you can even take a picture with them after their match (of course you should ask them first). You might see their personalities and be impressed by their kimono when you're this close to them.

Of course there are some rules that you should follow when you watch a sumo match. While sumo wrestlers are walking to the dohyou (sumo ring) before their match, you should not talk to them as they are concentrating on their match. Also if you want to touch them, you should ask them after their match.

7. What if you aren't around for the tournaments?

If you miss the timing to watch a sumo match in Japan, there is another way to watch sumo.

Many of sumo stables are open to the public to watch their practices. So if you really want to have a sumo experience, you can visit the stables. There are some tours of sumo practice watching, so you can make a reservation in advance. Some of the stables are just open to visit, so you might be able to visit the stables in the early morning without a reservation. However, please note that you have to be quiet while they are practicing so that the sumo wrestlers can concentrate on their practice. If possible, please sit seiza-style (with your legs folded under you). Chankonabe is the signature food of sumo wrestlers. Chanko is nabe (a stew-like soup) that contains vegitables, meat or fish, mushrooms, tofu and so on. Sumo wrestlers eat chankonabe everyday as it is very healthy, well-balanced food.

It is said that eating chankonabe and practicing regularly are good ways to become a good sumo wrestler. Every sumo stable has their own recipe of chankonabe and one of the first thing trainees who join the stable learn to do is cook the chankonabe.

As chankonabe is a very good balanced food, it is popular not only for sumo wrestlers and their fans, but also for ordinary Japanese people. After finishing their careers, some former sumo wrestlers have even opened their own chankonabe restaurants.