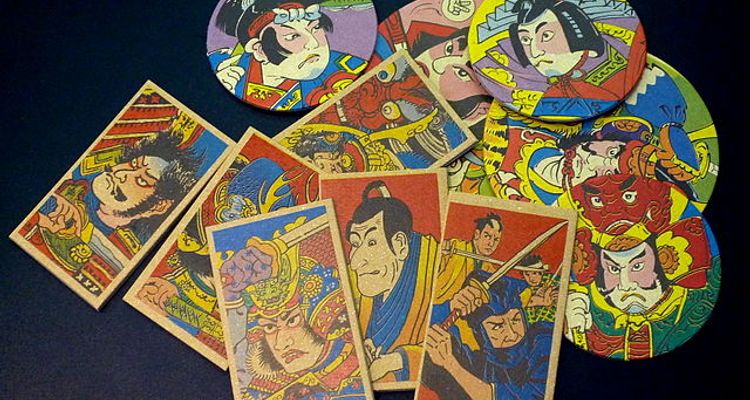 Are you looking for traditional and inexpensive souvenirs from Japan? Here are 8 Japanese toys that are representative of Japanese children's culture.

Theses are some of the common Japanese traditional toys you can buy in Japan. They are quite "traditional" and therefore it is rare for modern day children to have played with all the toys on this list. However, most of them are not so big or expensive, so they will be good souvenirs to share with your friends and family back home. Otedama is a juggling ball and most commonly played by girls. Often children sing a song as they juggle several otedama. In the past, otedama were often made at home using old kimono fabrics and dried beans or rice. However, not many children play with otedama anymore. Some elementary schools are re-introducing otedama at school to protect the tradition. Ohajiki is similar to the "winks" used in tiddlywinks. It is believed that ohajiki was introduced in Japan from China during the Nara period (710-794 CE). Since the end of Meiji period (1868-1912 CE), it is commonly made of glass and is 1cm to 1.5cm in diameter. The most common way of playing ohajiki is to try to hit the opponents' ohajiki to gain as many ohajiki as possible. Kendama is the Japanese version of cup-and-ball or bilboquet. Kendama, although not as popular as it used to be, is still widely played among children as well as adults. There are various competitions held each year. Recently, due to YouTube, kendama is recognized outside of Japan as well and has gained a lot of popularity. Kamifusen is a paper balloon and is very light and delicate. One blows air into the balloon and plays by tossing it lightly. It can be produced inexpensively, so it was often given as giveaways for children. The most common design is the one with red, yellow, green, blue and white stripes as shown in the photo but you can get other designs such as fireworks and watermelons. Menko is usually made of paper and is round or card shaped with a picture on one side. One puts menko on the ground and another player hits the menko on the ground with his or her menko. The rule depends on places, but often if the menko flips, then the person who flipped it can have that menko. Unlike other games on this list, if you lost playing menko, you also lost your menko cards as well, so children played quite seriously. Takeuma are stilts made of bamboo. It became popular among the children after the Edo period (1603-. There is no specific rules to how to play with takeuma. As children maintain their balance on top of takeuma, they often try to do things such as hopscotch, jump rope and game of tag. Taktonbo, also known as the bamboo-copter or bamboo dragonfly, is a toy one can fly by twirling the stem using one's hands. It is very easy to make and of the toys on this list, probably takedonbo is the one that most Japanese people have made on their own. Things such as the thickness of the bamboo and the angle can determine how well it can fly, so although it is easy to make, it is difficult to make one that can fly for a long distance. Koma is a spinning top and there are several different kinds: spinning using fingers, hands, or string. When playing with koma with a string as shown in the photo, one will pull the string before throwing the koma to the ground, where it will hopefully spin while keeping its balance. More advanced ways of playing koma are spinning it on one's palm and spinning across the surface of the string.