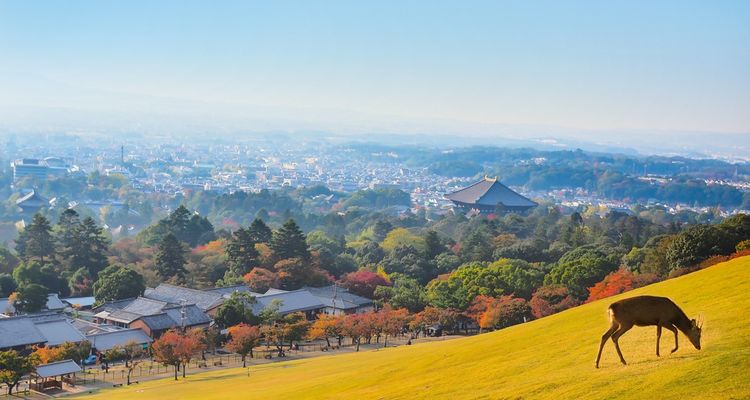 8 Must-See Sights in Nara, the First Capital of Japan

Nara was the first capital city of Japan and there are lots of historical sites, such as the Daibutsu, commonly known asThe Great Buddha, one of the most impressive sights of Japan. Nara City is easy to reach from Kyoto or Osaka, and you may find it more peaceful and relaxing, especially if you are a little tired of crowds of tourists.

Todai-ji temple contains the famous Daibutsu, The Great Buddha, in the Daibutsu-den. It is one of the most well-known statues in Japan and was cast in 746. The Daibutsu is 16 m high, consists of 437 tonnes of bronze and 130 kg of gold. Horyu-ji temple was founded in 607 by Prince Shotoku who is considered as a great patron of Japanese Buddhism. Horyu-ji temple is the oldest temple in Japan and  is famous for housing the country's rarest treasures.

Nara Park, or Nara Koen, has many of the most important sites in Nara, such as the Todai-ji temple. You will see hundreds of deer in this park, which were considered as messengers of the gods. The deer are normally very friendly, but you have to be careful when you have any food because they may become a little aggressive. Kofuku-ji temple was transferred from Kyoto in 710, and used to be a family temple of the Fujiwara family, the most powerful family at that period. There are two famous pagodas in this temple - three stories and five stories – and the five stories pagoda is the second tallest in Japan. Kasuga Taisha, which is the most famous shrine in Nara, was founded by the Fujiwara family in the 8th century. You will find hundreds of lanterns, donated by worshippers, hanging from the building.

Toshodai-ji temple was founded in 759 by Ganjin who was a Chinese priest invited to Japan by the emperor. Ganjin unsuccessfully attempted to cross the China Sea to Japan six times, before finally arriving in 753, and propagated Buddhism in Japan until his death. Ganjin's grave is located in this temple. When Nara was the capital of Japan, the central part was called the Heijo-kyo, Heijo Palace. It is about one kilometre wide and one kilometre long, and it was the centre of politics, culture and religion during the Nara Period (710-794). Mount Yoshino is the most famous cherry blossom spot in Japan with over 30,000 cherry trees planted around the slopes. People can enjoy the cherry blossoms spectacle during the middle of April.