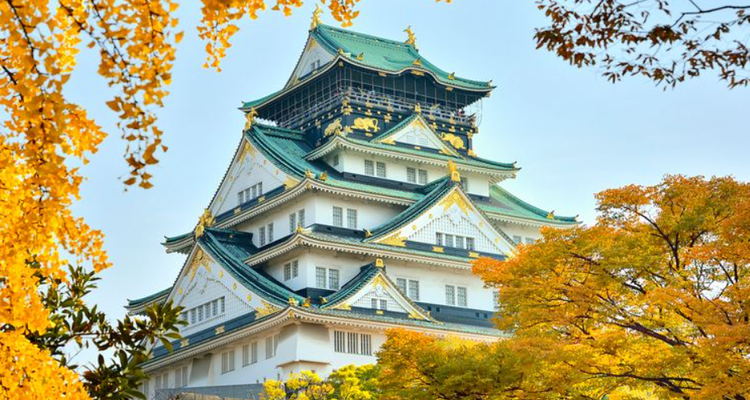 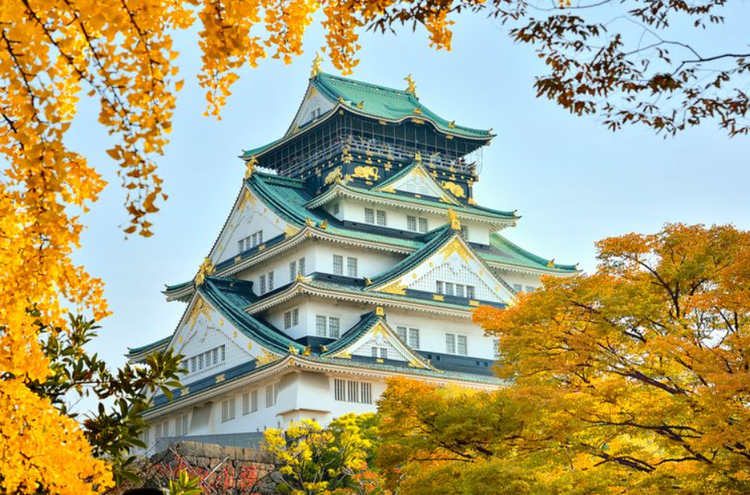 What is your impression of Japan's autumn? For many, the first thing that comes to mind is the image of mountains painted red by maple leaves. In fact, Japan's autumn is so much more than that. Aside from maple trees, the golden ginkgo trees can also be just as breathtaking. If you plan on visiting Kansai in autumn, here are the 8 best foliage spots to see them in full, golden flair!

Midosuji is a four-lane road that is 4 km long and 44 m wide. Being a major road in Osaka connecting the two business districts Umeda and Namba, it is lined with banks, restaurants, shopping malls and the like. Facing south from Hanshin Department Store, you can see more than 900 ginkgo trees on both sides of the street. In autumn, even busy passersby would slow down to admire the golden foliage.

When winter comes, the trees would also be adorned with lights, creating a romantic atmosphere completely different from that during daytime.

Osaka Castle Park is an urban park surrounding Osaka Castle, with 13 Important Cultural Properties and many other historical remains calling it home. As season changes, so does the beauty of the Plum Orchard and Nishinomaru Garden in the park. The giant ginkgo tree in front of the castle tower is estimated to be around 300 years old, while the lesser ones stand guard along the outer perimeter of the east side of the park for as long as 1 km.

Starting from early November, the ginkgo leaves will slowly turn yellow; by then, the park would not just be a resting spot for locals, but would also become a popular tourist destination.

Located near UNESCO World Heritage Kamigamo Shrine, Horikawa Street is an 8 km-long street that runs southward from Misono Bridge to Hachijo Street. Ginkgo trees are planted along the section between Imadegawa and Shimei-dori, as well as on the traffic median. What's more, some portions of these medians are even designated as walkways. You can admire the dense golden colors from below on the walkways, or from above on the bridge, and enjoy a leisurely walk.

Nishi Honganji Temple, a UNESCO World Heritage site, is a symbolic building of the Momoyama period (1568-1603). Over 16 m in height and believed to be at least 300 years old, the giant ginkgo tree standing before the Miedo is a must-see in autumn. What makes it even more special is the way its branches sprawl horizontally or diagonally upwards, as if reaching for the sky, earning it the name "reversed ginkgo". Legend has it that the temple was once caught in a fire, which was only put out with the help of water gushing out from the ginkgo tree, thus it is also known as the "water-spraying ginkgo".

The giant ginkgo tree is best visited from late October to mid-December for about 1.5 months, notably longer than its relatives elsewhere, making it a good choice for tourists on a short stay or those who can't make it to the other places.

Higashi Honganji Temple, officially named Shinshu Honbyo, is located in Shimogyo-ku, Kyoto-shi. While it is a popular fall foliage spot in mid to late November, it is also widely known as the head temple of Shinshu Otani-ha. Plenty of ginkgo trees can be found in and around the temple, like along Karasuma Street leading out of the main gate, around the fountain in front of the Goeido, and on the right after passing through the Goeido. By facing southward inside the temple, you can even see an exclusive view of golden ginkgo together with the nearby Kyoto Tower!

Nara Park is recognized as one of the National Natural Monuments, and is perhaps the most loved tourist destination in the ancient city of Nara. Spanning an enormous area of 5,110,000 square meters, it is home to historical temples and cultural facilities like the Todaiji Temple, Kofukuji Temple, Kasuga Taisha Shrine, Nara National Museum, Shosoin Repository, etc. Moreover, it is famous for its wild deer population. When autumn comes, tourists would gather here for the colorful ginkgo and maple leaves, with Mount Wakakusa as the perfect backdrop.

UNESCO World Heritage and Japan's National Treasure Himeji Castle is revered as the best castle of Japan. Its other name is "White Heron Castle", because its snowy exterior is often likened to a soaring white heron. It can be spotted the moment one steps out of the Central Gate of JR Himeji Station, and the road leading straight to the castle tower is called Otemae Street. It takes about 20 minutes to reach the castle on foot.

The ginkgo trees lining the Otemae Street are but icing on the cake - it does not matter whether you are inside or outside the castle, the views are just as stunning.

The Great Ginkgo of Sayo

Within the perimeters of the Manganji Temple in Hyogo, there is a giant ginkgo tree which is 28 m tall and 9 m thick, standing proud for the past millennium. It is both the representative of Sayo-cho and a National Monument of Hyogo.

The signage beside it reads: "Back in the Heian period, this place was called the Kamimanganji Village, ruled by the powerful Manganji family... The Kakitsu Rebellion in 1441 destroyed most of the halls, but the ginkgo tree survived. More than 1,000 years have passed, and its roots are still expanding, its branches ever growing strong, withstanding the toughest weather..."

Under the fair sky, the Great Ginkgo looks all the more majestic, bestowing a golden hue upon the rural town. If you happen to travel there, remember to pay respects to the holy tree.

If maple is the fiery protagonist of autumn, then ginkgo must be playing the supporting role - humble, but beautiful in its own way. Did any of the 8 recommended fall foliage spots tickle your fancy? Start planning for your own golden autumn now, before it's too late!