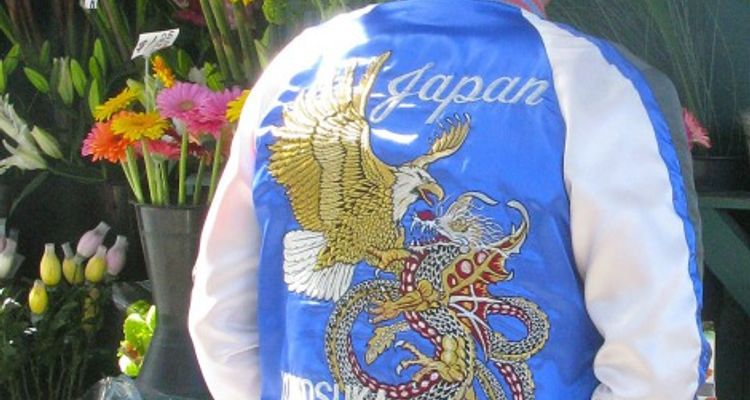 Have you ever heard of the word Skajyan (スカジャン)? It's a jacket style that started off in Japan during the World War 2. Here are 7 facts to enlighten you on Skajyan!

1. Skajyan are jackets made out of shiny synthetic material with embroidered designs on the back. They're similar to the shape of jumpers. They're normally can be wore both ways. The embroidered designs are flashy and glamorous, such as skulls, flowers, lettering's, crosses, and so on.

2. Skajyan started off as embroidering jackets of the American soldiers after the World War 2. After the World War 2, American soldiers around the Yokosuka area started getting their jackets embroidered with Japanese style designs. This was the start of Skajyan.

3. The origin of the name, Skajyan has 2 theories.

4. There are 2 fabrics mainly used in Skajyan. Skajyan uses satin and velveteen. For satin, they use rayon, acetate fiber, and polyester. For Skajyan that uses quilting for cold weather, is the result of supplement of the lack of material. Back then, silk and cotton weren't abundant as today, so they used cotton bits that came from spinning mill factories. But these cotton bits started piling up in the bottom of the jacket because it didn't hang on the fabric like cotton. Therefore, they used quilting to avoid this to happen.

5. Skajyan is sold at many brands. Here is a simple list. PEARL DRIVER, JUNKSTAR, CBGB, Ryuzakura (龍桜), Satori (さとり), Onigashima (鬼ヶ島), Hysteric Glamour, and so on. The image above is a Skajyan made by Hysteric Glamour.

Since it's a jacket, the prices are a bit high than t-shirts. It can be extremely expensive like 40000 yen, if it's a vintage made by a famous brand or a person.

7. If you want to go to an area gathered with Skajyan stores, go to Ueno.

Ueno Ameyoko (上野アメ横) has many Skajyan stores in the Ameyoko Center Building. Ueno Ameyoko is an area packed with food stalls, cheap stores from candy to apparel. It's right next to Ueno station.