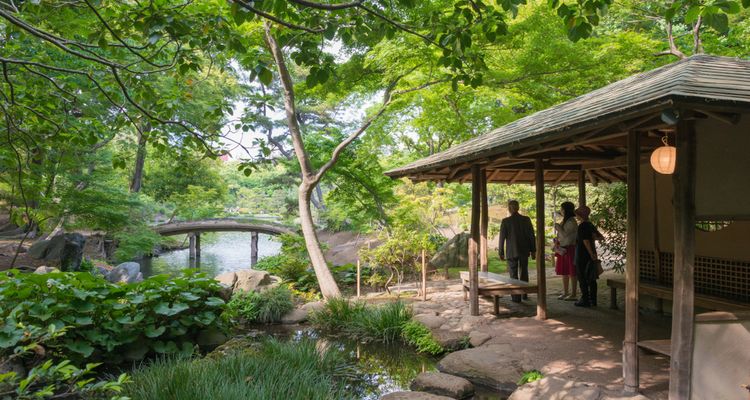 Generally, when we talk about Japanese gardens, people probably think of Kyoto's shrines and temple grounds. Not many would imagine that Tokyo, a megapolis, would have luscious green gardens hidden among its tall buildings. Following Kyoto's steps, Tokyo began building Japanese gardens within its walls. Most of them were created by the Tokugawa family  and feudal lords as a recreational place that surrounds their mansions. One of the most common feature of these Japanese gardens is a pond in the center of the compound, surrounded by lush flora like pine, maple, and cherry trees and flowering bushes like azaleas as well as stones or boulders to bring in part of nature to the mansions of these aristocrats. In this article, we'll talk about the best 7 Japanese gardens that you'll find in Tokyo.

Hidden within Tokyo's skyscrapers, this Japanese garden was originally built by the Tokugawa family as a hunting grounds for hawks. The garden was completed during the Ienari Tokugawa's time, who was the 11th shogun of the Tokugawa shogunate. This is one of the grandest gardens built by a Japanese aristocrat. When the seasons change, the garden changes along with it as some flowers fade and new ones bloom.  The huge flourishing grounds serves as an oasis to the tall buildings built around it. Visitors can also take in the scenery with a cup of matcha at the tea house in the gardens.

This garden was built by the 5th Tokugawa shogun, Tsunayoshi, at his residence. It's a unique garden because it captures  the literary elements behind a waka poem.  Its open grounds bring forth a sense of serenity with a touch of fineness. During autumn, when the leaves start to change, visitors come not only during the day but also at night when the trees are lit up to enjoy their beauty.

Right next to Tokyo Dome, this garden was built by Mito Mitsukuni from the Mito Komon household.  With a lake in the middle of the garden, the landscape surrounding the pond sees miniature hills rolling over it that visitors can enjoy while walking along the garden's path. Strongly influenced by Confucius, Mitsukuni brought in elements from the mountains, rivers, and lakes to the garden. Rikugien Garden's open landscape with its different elements working harmoniously is a definite must-see.

Kiyosumi Garden was built by a famous Edo merchant and the garden surrounds his mansion. During the Great Kanto Earthquake, half of this garden's grounds was used as an evacuation center. Since there are many sakura trees planted on the grounds, this garden is a popular spot for visitors to view the beautiful blossoms during spring.

This garden was built by a famous feudal lord at his residence during the early period of the Edo era. The lake at the center of the garden is surrounded by Japanese black pine trees, luscious azaleas, and boulders. One of special features of this garden is called Karetaki, a composition of stones that represents a waterfall.

When the merchants and artisans began to amass more wealth and social stature in the late Edo period, a famous merchant built this garden. The garden captures a different, more muted atmosphere from those that are built at residences of samurai warriors. The highlight of the garden is its luscious flower bed that changes with the seasons.  This well-loved garden among Japanese poets shows off stone carvings that display poems written by various people.

This garden was newly built during the Taisho period to replicate the gardens of feudal lords, complete with walking paths and fountains. In autumn, the garden provides breathtaking views of leaves changing colors among the decorative boulders.  This garden is well-known for its aesthetic appeal with its vibrant autumn leaves, bamboo groves and springs.

Aren't you amazed now at what a metropolis like Tokyo can offer you? Even among its skyscrapers and densely populated buildings, you can find green lush gardens. These green oases provides visitors time and space to relax, even for tourists that come from near and far.