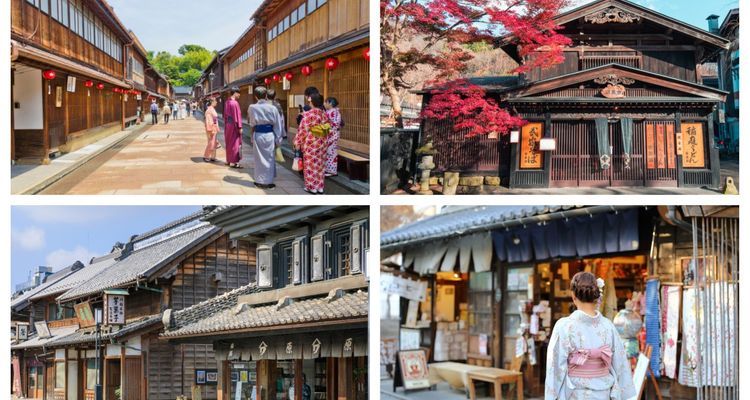 6 Areas Where You Can Experience Japan's Good Old Days

This time, we will introduce 6 areas close to the city where you can experience Japan's good old times. Tour around the sightseeing areas as well as the whole city to have an enjoyable time. Known as the Little Kyoto of Michinoku is Kakunodate in Akita Prefecture. The rows of cherry blossom trees and massive mansions will make you feel the good old days. The black board fence and a cherry blossom grove is a popular spot in the famous Bukeyashiki-dori. Many houses of low-class samurais stand in this area. Tochigi City is known as the city of storehouses. Since the Edo period, the Uzuma River that flows through the city was used and was a mercantile city of the North Kanto region. There is the Toshogu in Nikko and several feudal lords of the West used the road nearby when visiting the shrine. Some buildings of that road still remains today. Kawagoe City is located in southwest Saitama. Buildings resembling storehouses and the Toki no Kane (The Bell of Time) are popular tourist attractions. The Kashiya Yokocho (Candy Shop Alley) have over 20 stores and people of all ages can enjoy the good old times in this area. Mino City of Gifu Prefecture is famous for being a mercantile town during the Edo period. Buildings constructed between the Edo period to the Meiji era still remain and atmospheric old cityscape is very appealing. The liquor store, Kosakake Jyutaku is named as Japan's national important cultural property. Ine-cho is located at the eastern edge of Tango Peninsula. The Funaya no Sato (home of the fishermen houses) has 230 houses. It became Japan's first fishing village to be designated as the Preservation Districts for Groups of Traditional Buildings. The unique architecture of these fishermen houses were built between mid-Meiji era to the beginning of the Showa period.