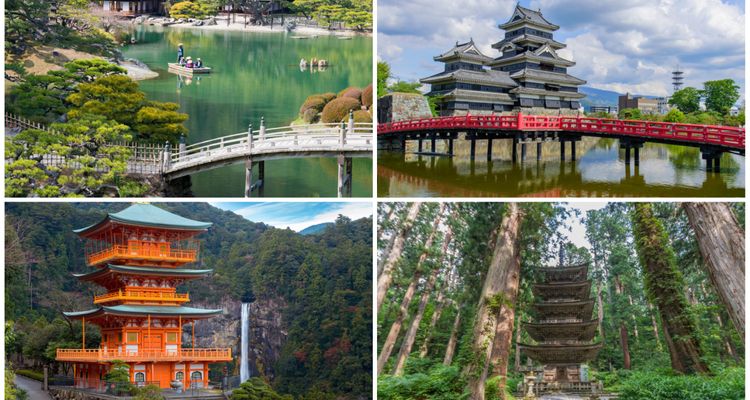 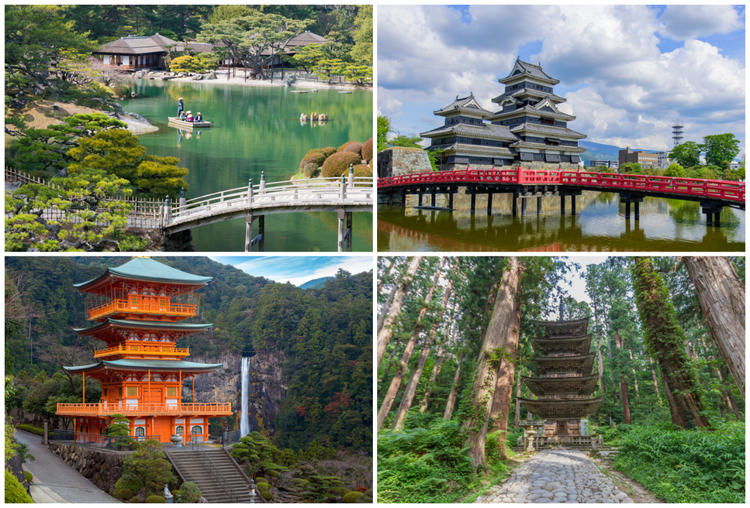 In Japan, there are so many places that we would like you to visit, or rather, places you MUST visit. Museums, traditional Japanese gardens, shrines, temples, places with lots of nature and even famous brand shops. Whichever you choose, the immense excitement that can only be experienced in Japan awaits you. This time around, we selected carefully and will introduce must-visit places which are like three Michelin star holders! Although Shirakawago has also been registered as a UNESCO World Heritage site, when you look at the splendid town with its sloped roof buildings, it seems like something separate from reality. Around February every year, the town’s light up event is held and still, the town covered in snow further adds to its beauty. Mount Fuji, which can be called Japan’s definitive symbol is a registered UNESCO World Heritage site. With a height of 3,776 meters, it is Japan’s tallest mountain. It is said that the magnitude of the beauty and scale of the base of the mountain which spans outward can only be understood by the people who have climbed Mount Fuji. Kubota Itchiku is the talented man who delivered the “Itchiku Tsujigahana” in today’s age. He accomplished this at the age of 60. This museum is where you can see the gems of his work and research. The world of Kubota Itchiku who pursued true Japanese beauty, remains a fascination to people all over the world. The Tokugawa Art Museum mainly features collections of articles collected from the Tokugawa Clan who established the Edo shogunate. Among other things, it also contains the picture scrolls of “The Tale of Genji” which holds 3 Michelin stars. With all the items of extremely high historical value, you’ll be able to learn about Japan’s Heian period. Ise Shrine, which for a long time has been considered to be Japan’s guardian deity, is a shrine that has had nonstop visitors both from within and outside the country. It is famous for being a strong “power spot”.  There is a dignified air along with a sense of solemnity here. Be sure to observe the proper rules when visiting the shrine. Miho Museum is a museum located within the mountains of Shiga prefecture. Estimated to cost a fortune, it has collected over 2000 artefacts from all over the world and assembled these amazing works together. The museum was designed by the world famous architect I. M. Pei so that you will also be astonished by the beauty of its exterior. The museum is located beyond the cave in the photo.

Sanjusangen-do is a Buddhist temple established approximately 900 years ago. There are 1001 Buddhist statues enshrined in the temple which are overwhelming in their intensity. The “Toshiya” archery contest took place under the eaves of the temple, where one had to hit their target from 120 meters away. Even today, this custom still remains. Kyoto National Museum, which was based off the designs of Katayama Tokuma who worked during the Meiji era, has a collection various exhibits including many national treasures. In 2014, a new annex was opened dedicated to the Heian era and based off the designs of Yoshio Taniguchi and together with Katayama Tokuma’s “Meji ancient city building”, you are welcomed by the old and the new of these magnificent structures.

Among all of Japan’s Zen temples, Nanzenji holds the highest status and was established about 700 years ago. Among other things, the “abbot’s chamber” holds 3 Michelin stars. You will be amazed by the various frescoes painted in the room. It has also been designated as a national treasure.

Daitokuji is a temple that is endowed with many national treasures and important cultural artefacts as well as turning out a great number of highly reputable priests. It has a close relationship with the culture of the tea ceremony and among other things, its gardens are renowned for their beauty. It has a number of outstanding features. You can also experience zen meditation firsthand, so we recommend it for those who wish to strengthen the focus of their mind.

When you speak about Ryoanji, it is famous for its rock garden. It has even been highly praised by Queen Elizabeth. In the white sand, 15 stones are carefully arranged However, they are arranged in such a way that no matter which direction they are viewed from, you will be unable to see one stone. Definitely pay a visit and see for yourself. Abeno Harukas, which only opened for business in 2014 is a 300m tall skyscraper complex. The viewing platform called “Harukas 300” gives you a 360 degree view of the Kansai area. In addition to that, the ceiling has a portion made entirely of glass that allows you to savor the feeling like you are strolling through the air. Registered as a UNESCO World Heritage site, Himeji Castle is said to be Japan’s most beautiful castle with immense splendor. Naturally, the castle tower which displays Japan’s beauty is also famous around the world. You can also enter the castle and experience the samurai lifestyle as it was back in those days. Todaiji was built in the 8th century by the Emperor of that time and required the strength of the entire nation. It is endowed with various national treasures and among other things, the Buddha statue is popular among tourists. Requiring the collaboration of over 2,000,000 people to build, many people visit for the purpose of seeing the enormous statue of Buddha. In addition, the south gate (Daimon) is also a highlight of the temple. Established roughly 1400 years ago, Horyuji, a registered UNESCO World Heritage site, is assuredly the oldest wooden structure of its kind in the world. In addition, it boasts a collection of over 2000 national treasures and important cultural properties. As a valuable cultural asset that conveys the former Buddhist culture in modern times, we can experience its amazing history. Established in the year 710, Kofukuji is a temple full of historical value that has been registered as a UNESCO World Heritage Site. Among other things, inside this building is a national treasure, the statue of Ashura (the Buddhist deity of war) which received 3 Michelin stars. Sculpted over 1000 years ago, this Buddhist statue looks on with an expression of kindness. In the Kumano area, Kumano Kodo is the many routes leading to 3 historical shrines. These historical routes, which have been registered as a UNESCO World Heritage site, were formerly used by a great many people regardless of their social ranking. In recent years, it has gained attention as a “power spot” and many people congregate there. The number of tourists has also increased. Mount Koya is the general term for the range of mountains that were established by a monk named Kukai approximately 1200 years ago. Since then, it has become a holy place for Japanese Buddhism. With as many as 117 temples in existence, the area has been registered as a UNESCO World Heritage site with a neverending stream of persons visiting from both inside and outside of the country to worship there. Nachi Falls, with its drop of 133 meters, is a sacred waterfall and a natural object of faith believed to contain the spirit of a deity. It’s powerful yet beautiful appearance cleanses your mind.  It also boasts of having the highest volume of water in Japan. It is recommended to visit during the hot summers. Adachi Museum of Art houses a collection of many works from the painter Yokoyama Taikan and is also famous for its splendid Japanese gardens. The gardens which have been praised as being “As beautiful as a painting” is maintained daily in order to preserve its loveliness. Foreign and of course local visitors should pay visit to these award winning gardens at least once.

Next： No.41-50 Further must-visit places in Japan