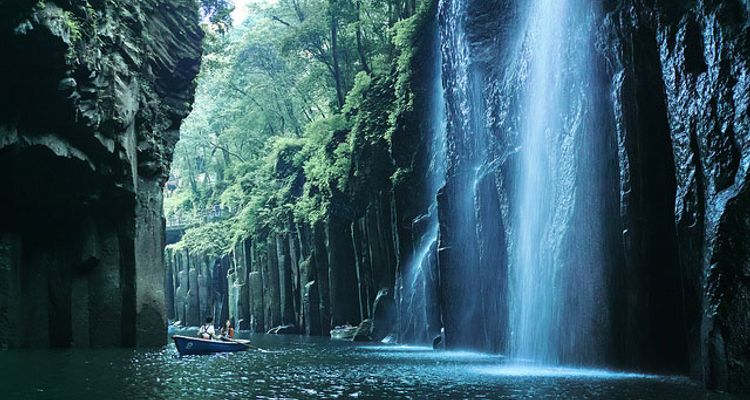 This lake has the 2nd highest degree of transparency in the world. People call it the "Mashu Blue" and its surface has a wonderful, but mysterious color of blue. Moreover, the lake is sometimes shrouded in mist, so people also call it "The Misty Lake Mashu". It is a man-made pond located in Biei Town, Shirogane. After being selected as a wallpaper for Mac OSX it became one of the world's most well-known places. It looks like it's blue, but the water is of course not blue. Hilly area that is located at the foot of the Daisetsuzan Tokachidake Mountain Range. These beautiful hills were used as a shooting location for a Japanese TV commercial. Biei is also called the "City of Hills".

One of Japan's Three Largest Sacred Mountains. The sulfuric smell that fills the area and the deserted views remind us of hell. One thing to note is that Osorezan (Mount Osore) is the general term for the outer rim of a volcanic crater and so practically, there is no mountain called Osorezan. The Oirase Mountain Stream in Aomori runs deep in the natural forest. There are many dynamic scenes here to see, due to the flow of the ever-changing waters. At Hiraizumi, you can see many remaining temples and architectures from the Heian Period, some of which have been registered as the UNESCO World Heritage Sites. It is full of charm such as the Chusonji Temple, the Golden Hall and the Pure Land Garden of Motsuji Temple. One of Japan's Largest Limestone Caves. It is also called the Iwaizumi Wakkutsu. It's also one of the world's most eminent clear blue underground lakes. Be careful, there are bats inside the cave!

A ravine that reminds you of China's Guilin. You will be touched by the enchanting view. When you visit Geibikei, you might also want to enjoy river rafting. One of Japan's most famous views which include around 260 islands in Matsushima Bay and the Matsushima Hills in the surrounding area. It is well-known, not only for its symbolic structures such as Godaido Hall and the red-arched bridge but also the magnificent views of the sunrise and sunset. A famous place that's renowned for Matsuo Basho's poem "silence, sinking into the rock, cicada's song". Houshu-yama has many attractions such as Risshakuji Temple and the face-to-face stone. Moreover, the view from the observation deck in Godaido Hall is a must-see spot. The Onsen Ryokans (hot spring inn) line up along the street still retains the atmosphere of the Taisho era. At night, it is lit up by gas lamps, filling the scene with an illusory atmosphere. Autumn leaves spread all over this area in autumn, and you can enjoy breathtaking views of the Kegon Waterfalls and Lake Chuzenji from the Akechidaira Observation Deck. The Fukiware Falls are also called the "Asia's Niagara" because of its flowing figure from three different rivers. This fall is named "Fukiware" because the flow looks like the riverbed has been split up and the water is spouting out. This is a fountain with a large volume of groundwater gushing out, but people say that it never gets muddy. There is a legend that a dragon made this fountain by making it rain for three days and three nights. These rice terraces are located in a slope of a mountain that spreads in steps. Although it's not a tourist spot, many photographers visit here as  they are attracted by this magnificent  view. One of Japan's Three Largest Ravines. It is located in the Hida Mountains that cuts into Tateyama and the Ushiro Tateyama Mountain Ranges. It is well-known for its views of the red Shin Yamabiko Bridge, the Sarutobi-kyo Observation Deck and also activities such as taking truck trains. Yuki no Otani is located in Tateyama. The wall reaches a height of 20 meters in some spots. It is made from the snow that is plowed away from the road. One of Japan's most famous gardens. It's a type of Japanese garden with a pond in the centre that represents the Edo era. The name "Kenroku" was given because it has six attributes: grandeur, seclusion, human power, class, water courses and magnificent views. These rice terraces have been certified as an agriculture heritage site. The figure of small rice paddies that pile up along the coast of the Sea of Japan is indeed a magnificent view. The number of fields is above 1,000 more than the state's specified number. Within Kisoji inn town, Tsumago-juku has a street of houses and stores with a total length of around 500m, and still leaves the atmosphere of Japan in the   Edo-period town.

Next： No.21-40 Further Amazing Japanese Views