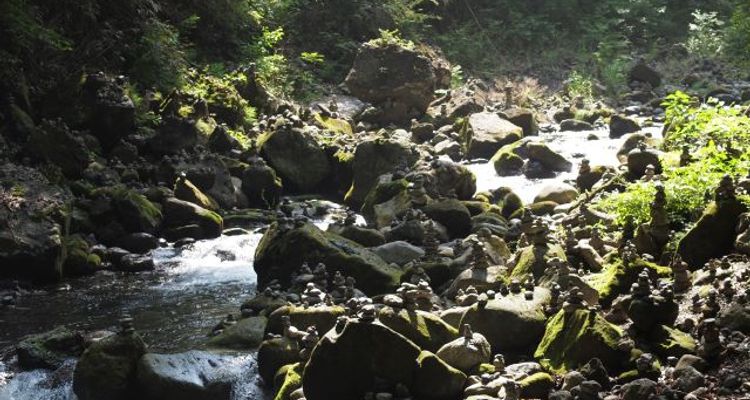 Power spots are trendy in Japan as places where you can gain energy in order to achieve your goals. When it comes to them, everyone has their favorites, but these are the five power spots that Japanese people say they want to visit at least once in their lives.

Of course, if we're going to go with the best power spot in Japan, wouldn't it be "Japan's heart," Mt. Fuji?
Japan still holds a mountain-based spirituality, so there shouldn't be any Japanese people who can look upon Mt. Fuji's beauty and not feel some sort of power, even if they have no interest in mountains themselves.
Among people who are interested in spiritual phenomona, they say that Mt. Fuji's power is connected to Mt. Shasta's in California. It sits on top of what is called the world's largest fault, the Japan Median Tectonic Line.
You get a reaction when you dowse here...
Because it's a place where two faults jostle, any feelings of plus and minuses are negated.
Therefore, compasses often stop working there.
It's also known that many of Japan's biggest shrines and temples sit on top of the Japan Median Tectonic Line.
Suwa Taisha, Ise Jingu, Heitate Jinja...many shrines that are called power spots are on that line.

This temple sits in the forest where goblins that are the spirit of the mountains are said to live.
For people who are interested in healing: this is the birthplace of reiki.
The originator of reiki, Usui Mikao, climbed the mountain, and while he was fasting as part of his pursuit of knowledge, developed this spiritual act.
After that, reiki was introduced to Hawaii, and from there spread around the world.
The place where reiki was born is Mount Kurama (including Kuramadera, the temple), and it is said that the Hindu wiseman Samat Kurama came down from this mountain.

This is the setting for the ancient Japanese myth "the hidden cave".
In the story, the sun goddess, Amaterasu, darkened the whole world because she hid herself in this cave.
It takes ten minutes to walk from the shrine to this dry river bed.
Many people pray at these rocks and it seems like the gods can hear all sorts of prayers. This is Japan's largest stone circle.
There are around 20 megaliths standing at a little less than 3 meters each, but if you count the parts of the rocks that are embedded in the earth, they're closer to 4 meters tall.
On this mountain, other than the stone circle, there are countless other megaliths as well.
In terms of history, it seems that this was a place for religious ceremonies. The leading theory is that it was a prototype for modern day torii gates.