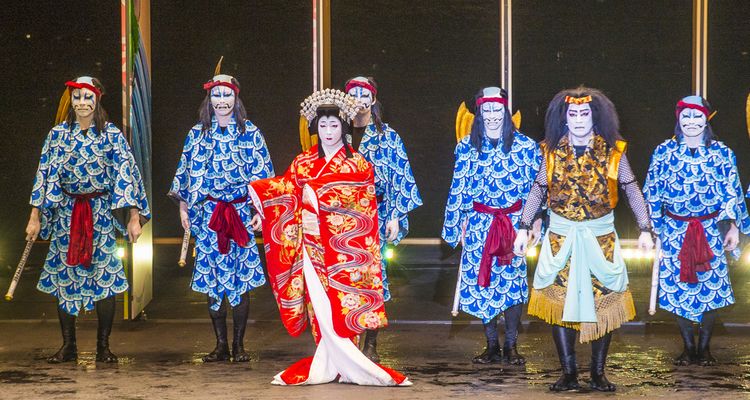 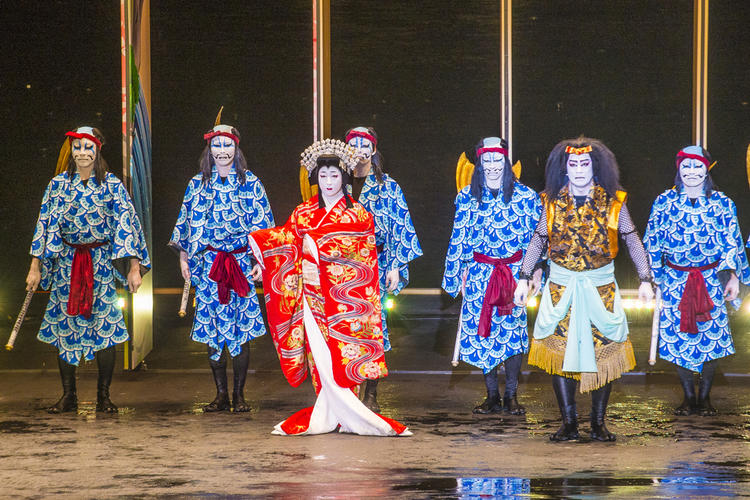 Japan is a land filled with interesting cultures. To recognise and perserve these cultures from dying, UNESCO had inscribed 22 Intangible Cultural Heritages in Japan. A famous traditional Japanese theatre, Kabuki was first introduced in the Edo period, about early of 17th century. The theatre soon became popular with the townspeople after its introduction. Kabuki plays usually are related to historical events or conflict from a relationship. Ranking with Nô and Kabuki as one of Japan’s foremost stage arts, the Ningyo Johruri Bunraku puppet theatre is a blend of sung narrative, instrumental accompaniment and puppet drama. This theatrical form emerged during the early Edo period (ca. 1600) when puppetry was coupled with Johruri, a popular fifteenth-century narrative genre. The plots related in this new form of puppet theatre derived from two principal sources: historical plays set in feudal times (Jidaimono) and contemporary dramas exploring the conflict between affairs of the heart and social obligation (Sewamono). Originated in the 18th century, Nôgaku Theatre gained its popularity in the 14th and 15th centuries. The theater often presents plays based on Japanese traditional literature. It is a dance-based performance which includes traditional costumes, masks and various other props. Nôgaku Theatre comprises two different types of performances – Noh and Kyogen. Akiu no Taue Odori is a traditional rice-planting festival, where residents perform a ritual dance praying for good harvest. It takes place in the spring or autumn, and 10 women in colourful kimonos together with either two or four men perform the beautiful dance. It is also known as a folk performance art. Chakkirako is a festival held annually on 15 January in Miura City, Misaki. It is a traditional event where little girls between ages 5 to 12 perform dances holding bamboo sticks (chakkirako) and traditional Japanese fans. Daimokutate is a medieval performing art on stage performed since 1300 A.D.. Now it is done on the eve of Yahashira Jinja Autumn Festival. It is a performance of only speech with a unique intonation and with no music or action accompaniment. According to legend, travelling performers of bugaku, the ritual dance and music of the imperial palace, visited Hachimantai Town in northern Japan in the early eighth century, during the reconstruction of Dainichido, the shrine pavilion. The ritual performance of Dainichido Bugaku takes its name from this story, but the art evolved considerably since, reflecting local features as elders transmitted it to the young within each of the four local communities of Osato, Azukisawa, Nagamine and Taniuchi. On the second day of each year, the 2 January, the people of these communities proceed from dedicated sites to the shrine, where they perform nine sacred dances from dawn to noon as a prayer for happiness in the New Year. Gagaku, characterized by long, slow songs and dance-like movements, is the oldest of the Japanese traditional performing arts. It is performed at banquets and ceremonies in the Imperial Palace and in theatres throughout the country, and encompasses three distinct arts. Kagura, or “god-entertainment,” is a type of Shinto theatrical dance found throughout Japan. Kagura dancers are not professional performers; rather, they are local residents with other full time jobs, such as public employees, business owners, farmers, and carpenters. They would visit local homes and perform to pray for an abundant harvest, peace, and prosperity. The Hitachi Furyumono is a parade held during the cherry blossom festival each April in Hitachi City on the Pacific coast in the middle of Japan, and once every seven years in May during the Great Festival at the local Kamine Shrine. Each of four local communities – Kita-machi, Higashi-machi, Nishi-machi and Hom-machi – creates a parade float that serves at once as a space to worship a deity and as a multi-level puppet theatre. Japanese folk faith holds that, in times of change, a deity visits our world to bring blessings. Koshikijima no Toshidon, which occurs every New Year’s Eve on Shimo-Koshiki Island in the southwestern part of the Japanese Archipelago, is one suchraiho-shin, or visiting deity. Two to five local men dress as deities called Toshidon, donning straw raincoats decorated with the leaves of indigenous plants and monstrous masks with long, pointed noses, oversized fangs and demonic horns. 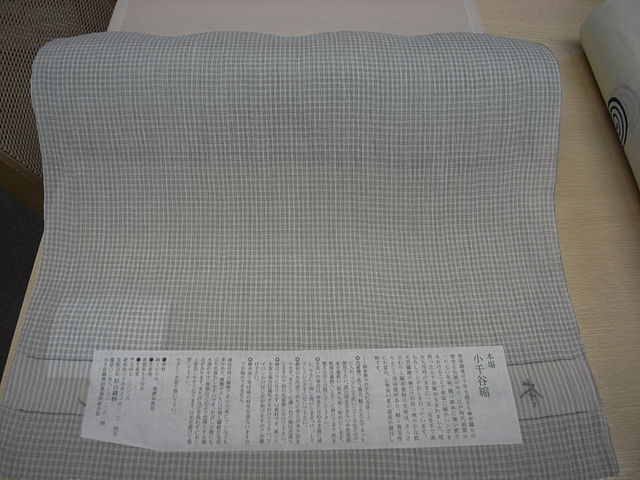 Ramie is a very strong fiber that is often used to make industrial sewing thread, fishing line, or used for upholstery and clothing once blended with other textiles. The process of making ramie from the plant makes it an expensive material.

The high-quality, lightweight patterned textiles made from the ramie plant are ideal for the hot and humid Japanese summer. Ojiya-chijimi, Echigo-jofu: techniques of making ramie fabric in Uonuma region, Niigata Prefecture developed in the north-western part of Japan’s main island and bear the mark of the region’s cooler climate – particularly its snowy winters. Ramie fibres are split from the plant by fingernail and twisted into threads by hand. Oku-noto no Aenokoto is an agricultural ritual transmitted from generation to generation by the rice farmers of the Noto Peninsula, which projects from Ishikawa prefecture in the centre of Japan’s main island, Honshu. The twice-yearly ceremony is unique among the harvest rituals of Asia in that the master of the house invites the deity of the rice field into his home, behaving as though the invisible spirit were really present.

14. Sekishu-Banshi: papermaking in the Iwami region of Shimane Prefecture (2009) The unique techniques of Sekishu-Banshi papermaking create the strongest paper produced in Japan. Once popular among merchants for account books, it is used today primarily for shoji (paper doors), calligraphy and conservation and restoration work. The Ainu are an indigenous people who today live mostly in Hokkaidō in northern Japan. Traditional Ainu dance is performed at ceremonies and banquets, as part of newly organized cultural festivals and privately in daily life; in its various forms, it is closely connected to the lifestyle and religion of the Ainu. The traditional style involves a large circle of dancers, sometimes with onlookers who sing an accompaniment without musical instrumentation. Gion Matsuri, also known as “Gion-san” by the locals is an annual festival held on the entire month of July. It is known as one of the most famous, biggest and the most historic festivals in Japan. Gion Masturi is a religious event organised by Yasaka-jinja Shrine with more than 1,100 years of history. This month-long festival is famous for its 32 beautiful decorated floats, known as ‘yama’ and ‘boko’, made especially for the Matsuri and guess what, the festival also features more than 30 events that keep the city alive the whole July. Kumiodori is a Japanese performing art found on the Okinawa islands. It is based upon traditional Okinawan music and dance, but also incorporates elements from mainland Japan, such as Nogaku or Kabuki, as well as from China. Kumiodori dramas recount local historical events or legends, accompanied by a traditional three-stringed instrument. The Yuki-tsumugi process can take up to 45 days to complete a single patterned garment for an adult.

Yuki-tsumugi is a Japanese silk-weaving technique found principally in Yuki City and Oyama City, along the Kinu River, north of Tokyo. The Yuki-tsumugi technique is employed to produce pongee silk (also called raw silk) – a light and warm material with a characteristic stiffness and softness, traditionally used to make kimonos.

Mibu no Hana Taue is a Japanese agricultural ritual carried out by the Mibu and Kawahigashi communities in Kitahiroshima Town, Hiroshima Prefecture to assure an abundant rice harvest by celebrating the rice deity. On the first Sunday of June, after the actual rice transplanting has ended, the ritual enacts the stages of planting and transplanting. Villagers bring cattle to Mibu Shrine to be dressed with elaborately decorated saddles and colourful necklaces. An elder carrying a sacred stick then leads them to a rice field specially kept in reserve for the ritual. After the cattle have ploughed the field, colourfully dressed girls place seedlings inside a case while singing a song under the direction of an elder. Then the rice field is levelled with an implement (eburi), said to contain the deity of rice fields. The girls then transplant the seedlings one by one, walking backwards, followed by the eburi-user and the person carrying the seedlings, who level the field as they pass. Sada Shin Noh comprises a series of ritual purification dances performed every year on 24 and 25 September at the Sada Shrine in Matsue City, Shimane Prefecture, Japan as part of the gozakaeritual of the changing of the rush mats. The dances are undertaken to purify new rush mats (goza), upon which the tutelary deities of the shrine will sit. The replacement of mats elicits their blessings for the community.

21. Nachi no Dengaku, a religious performing art held at the Nachi fire festival (2012) The Nachi Fire Festival is one of the three largest fire festivals in Japan. 12 mikoshi (portable shrines) are carried to waterfalls as people wave around massive pine torches. The Nachi no Dengaku is an important part of this festival.

Nachi no Dengaku is a Japanese folk performing art with a deep connection to Kumano Sanzan, a sacred site in Nachisanku. It is performed on a stage inside Kumano Nachi Shrine during the annual Nachi Fire Festival, celebrated on 14 July. It is a key component of the festival and takes the form of ritual dancing to flute music and drums for an abundant harvest of rice crops. Nachi no Dengaku is performed by one flute player, four drummers with drums tied around their waists, four players of Binzasara, a musical string instrument, and two others. Eight to ten performers dance to the music in a variety of formations.

22. Washoku, traditional dietary cultures of the Japanese, notably for the celebration of New Year (2013)

While "washoku" literally means "Japanese food," what UNESCO is specifically honoring is not the meals itself necessarily but the care and dedication that people put into creating the food. This can best be seen in traditional "kaiseki," a form of hospitality through meals that you can enjoy at high-class hotels and ryokan inns.

Washoku is a social practice based on a set of skills, knowledge, practice and traditions related to the production, processing, preparation and consumption of food. It is associated with an essential spirit of respect for nature that is closely related to the sustainable use of natural resources. The basic knowledge and the social and cultural characteristics associated with Washoku are typically seen during New Year celebrations.