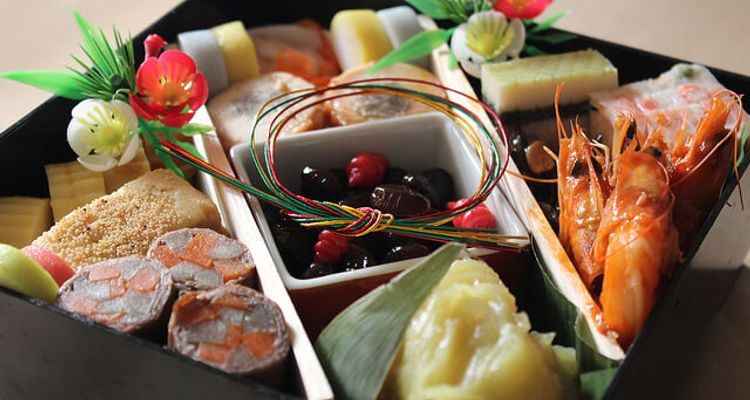 19 Dishes You Can Find in Traditional Japanese New Year Food

The traditional New Year's food in Japan is called "osechi-ryori," and it consists of numerous little dishes based on region and history. Here is a list of some common and not-so-common foods found in osechi-ryori.

A traditional local New Year’s food known as osechi-ryori is commonly consumed on New Year's Day (which is referred to in Japanese as "Ganjitsu"). Osechi-ryori, or often called just “osechi,” is a food that consists of various colorful dishes.

As the New Year symbolizes a new beginning, osechi-ryori consists of food with auspicious meanings. The dishes are stored in a three or four-tiered container called "Jubako." On Ganjitsu, people are not supposed to work, including the housewives. Hence, osechi is prepared in advance for Ganjitsu. The tradition of eating osechi can be traced back to the Heian Period (794 to 1185). In early days, it was believed that no one should use a hearth nor cook a meal (exception was given to zoni, a typical soup for the New Year) on the first three days of the year. Hence, osechi conists of preserved dishes which usually can be kept at room temperature for a few days.

Over the years, the popularity of osechi in Japan has been dropping. Not only do the dishes take a lot of effort to prepare, but many people see the preserved dishes as unhealthy. Nowadays, you could get osechi in supermarkets easily and the cost of osechi is also high due to the complexity of the food, another reason for its declining popularity. For those who are visiting Japan this coming New Year, you might want to try this traditional New Year’s food, even though it is losing its popularity  it is still good to taste a traditional meal.

In modern years, osechi dishes can be westernized and different regions tend to have some different dishes. To give you some idea, here are some 19 dishes that you might find in osechi. Kamaboko are to boiled fish cakes that come in pink and white colours.

kuma_scallop
Usually seasoned with light soy souce, Kazunoko is herring roe. It symbolizes fertility due to the amount of eggs it has. The characters for kinton literally mean “group of gold”, so with the golden color of this sweet, it represents a wish for wealth and financial success in the New Year. Nishime consists of mix boiled vegetables which are usually beautifully arranged. Some of the vegetables include burdock root (gobo), carrot, lotus root (renkon) and taro (yatsugashira). This is a whole baby turnip cut to look like a chrysanthemum flower that’s then pickled in vinegar, salt and sugar with some chili pepper in the middle. The chrysanthemum is the symbol of the emperor and is used to mark joyous occasions. Ebi means prawn. It is usually cooked together with sake and soy sauce. Sometimes instead of ebi, lobster is used. Ebi symbolizes a long life - that you will live until your beard grows long and your waist bends. Toriniku-no-teriyaki means grilled chicken with sweet soy sauce. Although this is not a common dish found in Osechi-ryori, you might find it sometimes. Tai is refers to red sea-bream in Japanese. The word “tai” is often related to “medetai” (meaning auspicious in English). Ika means squid in Japanese. This is another uncommon dish served in osechi-ryori.

Nama-fu means wheat gluten. The mixture of glutinous rice flour and millet is steamed and shaped in desired patterns and colours. Namasu is a kind of salad consisting of shredded carrot and daikon (Japanese radish) and seasoned with vinegar. The combination of orange and white colors represents happiness. This is a kind of seaweed used to wrap ground meat. The word ‘Konbu’ which often relates to "yorokobu," which means happiness and joy. Also known as "gobo," Kinpira Gobo is burdock root marinated with vinegar and sesame. As the burdock root grows deep into the earth, it represents good health and harvest for the coming year.

Datemaki is a sweet rolled omelet mixed with shrimp or fish paste. When it is apart it is a symbol for celebration, but when it is rolled into a scroll it means luck in academics. Lotus root with its many holes is a symbol of an unobstructed view of the future. Another lotus root dish, renkon no netsuke is fried lotus root seasoned with sweet soy sauce. Like subasu, the holes of lotus root allow one to see the future.

In early days, osechi-ryori did not consist of a wide variety of foods like the ones available today. It consisted mainly of nimono, boiled mix vegetables with soy sauce, sake and sweet seasoning.