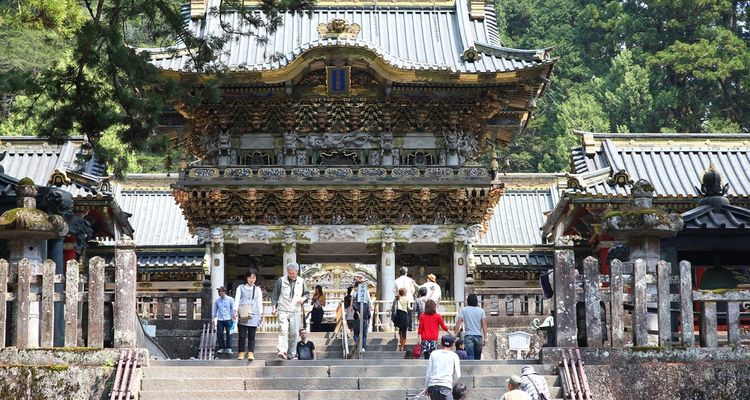 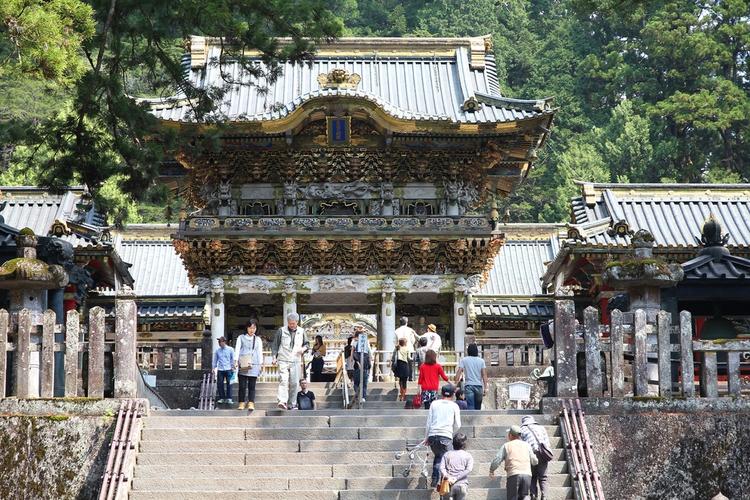 17 Things to Do in Nikko: World Heritage Sites and Gorgeous Natural Scenery

At two hours of train from Tokyo, Nikko is a historical area full of UNESCO World Heritage sites, including the Nikko Toshogu Shrine. As if that wasn't enough, this gorgeous area of Japan also offers beautiful natural landscapes and relaxing Japanese baths. If you're planning a trip to Japan, it's well worth a visit! Read on for 17 amazing things to do in Nikko.

Nikko is a town located in the Tochigi prefecture, 2 hours by train from Tokyo. There are many things to do in Nikko, including the shrine and temple complex around the Mount Futara (or Mount Nantai) which were founded in the 8th century by Saint Shodo (735-817), a famous Buddhist monk. The surroundings of the Lake Chuzenji were also a place for Buddhist training. Another noticeable site in the area is the Nikko Toshogu Shrine, dedicated to Tokugawa Ieyasu and part of UNESCO's World Heritage list. Besides the religions places, the stunning red leaves scenery during autumn attracts many tourists. You will find below 17 of the most interesting spots in Nikko. Don't forget to consult our guide to 12 Popular Restaurants in Nikko while you plan your trip, too! The Shinkyo bridge is like the main entrance to Nikko's temples and shrines complex, the perfect place to start your journey from. The bridge itself is part of the Futarasan Shrine, one of the tree in Nikko that worship the Mount Futara as a "shintai". In the Shinto religion, a shintai is an object in which a divinity can reside, providing a physical form accessible to its believers.

A legend says that when Saint Shodo arrived here, the water flow was so strong he could not cross the river. A god helped him by sending two snakes that turned into a bridge. After crossing the Sacred Bridge, you will find a stone monument indicating the entrance of the Mount Nikko's Rinnoji Temple Complex, which includes all of the 15 temples and towers in the mountains. The main building called Sanbutsudo (Three Buddha Hall) houses tree large Buddha statues (Amida, Senju Kannon, Bato Kannon), that are seen as manifestations of Nikko's three mountains deities.

3. Kaizando (Sacred Hall for the Founder of the Temple) Climbing up a bit more will lead you to the sacred hall dedicated to Saint Shodo, the founder of Nikko Mountains Temples Complex. Inside the hall are enshrined wooden representations of Jizobosatsu (Ksitigarbha Bodhisattva) and 10 disciples of Saint Shodo, carved during the Muromachi perod (1333-1573).

Nikko Toshogu Shrine is dedicated to Tokugawa Ieyasu (1543-1616), the founder of the Edo Bakufu (also called Tokugawa shogunate, 1603-1867). Most of the actual building was made under the reign of the third Tokugawa shogun, Tokugawa Iemitsu (1604-1651). The Shrine, including the Yomeimon Gate, is full of beautiful wooden sculptures. It is said that all the country's carpenters specialized in temples were gathered for it and that people don't get tired after looking at them a whole day. The numerous animals in those sculptures are thought to be symbols of peace. Among these, you will find the famous "Tree Wise Monkeys" representing the maxim "See no evil, speak no evil, hear no evil" taught by the Tendai Sect, a Japanese school of Buddhism. Behind the Toshogu Shrine stands  another more discreet one, where the god of Futarasan Shrine is worshipped. It is a popular place for those who wish to have children or a safe delivery and three spots in particular attract people to this small shrine. The first is the "Untameshi no torii", the gate that tests your luck: if you throw three pebbles through the hole of the rock at the top of the gate (see photo above) and that at least one of them passes through, something good will happen. The second is the "Kodane ishi", a rock that you touch in order to be blessed with children, and the third is the "Enmusubi no sasa" where you can test your love. Indeed, if you manage to tie a bamboo leaf (or a piece of paper) around the bamboo branch using only your thumbs and little fingers, you will surely get married. This five-story pagoda is supported by a center pillar at its core. This system is praised for its resistance to earthquakes, useful in a seismically active place like Japan. The same earthquake-resistant structure was used in the Tokyo Sky Tree tower. It is also said that the Tokyo Sky Tree height is the same as the elevation (height above sea level) of the place where the Five-Story Pagoda stands.

Next to the Toshogu Shrine, the old Futarasan Shrine is at the origin of the religious belief in Nikko's region. Here is worshipped the god of marriage that also brings luck, Onamuchi-no-Mikoto, who later became Okuninushi.

This is the main Shrine here, but two other are located nearby: the Okumiya Shrine on the Mount Nantai and the Chugushi Shrine on the shore of the Chuzenji Lake. This shrine, listed among UNESCO's World Heritage sites, is dedicated to Edo's Bakufu third shogun, Tokugawa Iemitsu (1604-1651). It was built according to his last will to be buried near his grandfather Tokugawa Ieyasu, the dynasty's founder, in order to serve him after death. Usually, the main building of a temple faces the South ; however the Taiyuin Temple heads towards the North-east, even though it is considered an unlucky direction. It was decided in such way as to show his respect to his grandfather, by facing the Toshogu Shrine. Although this mausoleum is located in a slightly remote place, it is worth a slow-paced visit for its beautiful engravings and architecture. If you follow the Daiya river, you will reach a small gorge called Kanmangafuchi Abbyss. On one side of the river, is a botanical garden with a great view to enjoy any season. Besides the beautiful landscape, you can also find on the south shore 70 Jizo statues, called "Bakejizo" (ghosts jizo) because it is said that their number changes every time you count them. Feel free to check by yourself!

The legend suggests that the inscriptions on the wall upstream were engraved by the famous Kukai himself, also known as "Kobo daishi" (The Grand Master that propagated the Buddhist Teaching). The things to do in Nikko are not limited to shrines and temples: there is plenty of gorgeous natural scenery, too. This is the name given to the slope you will climb when you go from Nikko City to Chuzenji Lake, situated on a higher elevation. The upslope and downslope roads have a total of 48 curves, which also fits the numbers of syllables in the formerly used Japanese alphabet "Iroha". Therefore each curve received the name of one of the Japanese alphabet syllables, hence the name "Iroha Slope". The autumn red leaves scenery is so spectacular that tourists flow causes every year huge traffic congestion. The Chuzenji Lake at the inner part of Nikko has been created by an eruption of the Mount Nantai. From the Meiji period (1868-1912) until the early Showa period (1926-1989), it attracted lots of foreigners who built their summer residences there. You can enjoy every season's beauty here such as the cherry blossom during Spring or the red leaves in Autumn. A sightseeing boat cruise will take you around the lake to get an even prettier view. This service is available from April to November and you can choose between two types of course. In Autumn, there is also a special one to see Fall's colors. The Chuzenji Temple used to be Saint Shodo's training place. It is also renowned for its wooden statues of Buddha, especially the Hashiri-Daikokuten and the Tachiki-Kannon. The latter eventually became part of the temple's name. Moreover, the view from the temple on Chuzenji Lake and Mount Futara is splendid.

From the JR or Tobu Nikko Station, take the Tobu bus until "Chuzenji Onsen" bus stop (about 40 minutes), then walk 25 minutes.

There are a lot of waterfalls in Nikko, but Kegon Falls are by far the most famous and even made it to Japan's best waterfalls top 3. We can only recommend you to take the elevator to the observation deck and try to get a closer look at the base of the falls. During winter, you can enjoy a whole different show as the waterfall eventually freezes.

From the JR or Tobu Nikko Station, take the Tobu bus until "Chuzenji Onsen" bus stop (about 40 minutes), then walk 5 minutes.

This beautiful shrine on the lake shore is one of the three Futarasan Shrines in Nikko. Its name, "Chugushi" (Intermediate Shrine), comes from its location between the Main Hall and the "Okumiya" (Inner Shrine). You can also play a game on its grounds: if you manage to find the location of the Seven Gods of Fortune stone statues enshrined here, then write it down on the brochure, you will get a present.

From the JR or Tobu Nikko Station, take the Tobu bus toward "Yumoto Onsen" until "Futarasan Jinja Mae" bus stop (about 40 minutes), then walk 1 minute This waterfall cascades down on 210 meters (688 ft) of stone stairs. A rock near the base divides the water stream, giving it a shape similar to a dragon's head, hence the name "Ryuzu" (dragon's head). The scenery around the waterfall is not only famous for its red leaves during  the autumn, but also for its beautiful red azaleas in May. You can enjoy a better view on the waterfall if you try to climb the stairs alongside the river.

If you love the Japanese countryside, you don't have to look far to find stunning landscapes and charming historical towns. 15 Must Visit Beautiful Japanese Villages is a good place to start to planning!

From the JR or Tobu Nikko Station, take the bus toward "Yumoto Onsen" until "Ryuzu-no-Taki" (about 1 hour), then walk 2 minutes This quiet spa town located in Okunikko (Inner Nikko) has many traditional Japanese hotels (ryokan) with hot springs, where you can rest and relax. There is also a free hot spring footbath called "Annyo-no-yu" in the middle of the town, effective against rheumatisms and nerve pains.

From the JR or Tobu Nikko Station, take the Tobu Bus to "Okunikko Yumoto Onsen" bus stop (about 70 minutes)

This museum will teach you a lot about the lacquer objects in Nikko's UNESCO World Heritage sites like the Toshogu Shrine and the Rinnoji Temple. Although there are a lot of lacquer items in Japan, you can see here some of the most precious ones as well as various interesting features about lacquer. You can even try painting on lacquer yourself.

From the JR or Tobu Nikko Station, take the bus toward "Kirifuri Kogen" until Marumi bus stop, then walk 10 minutes

As you can see, there is a wealth of things to do in Nikko! This area features Heritage-level temples and shrines, beautiful natural sceneries, and Japanese hot springs. In other words, you can appreciate Japan's many charms just by strolling the town!

Some people visit Nikko as a day trip from Tokyo, but staying the night is a great way to really take in the historical atmosphere. If you're looking to stay in Nikko, browse our recommendations for 8 Superb Lodging Choices in Nikko.