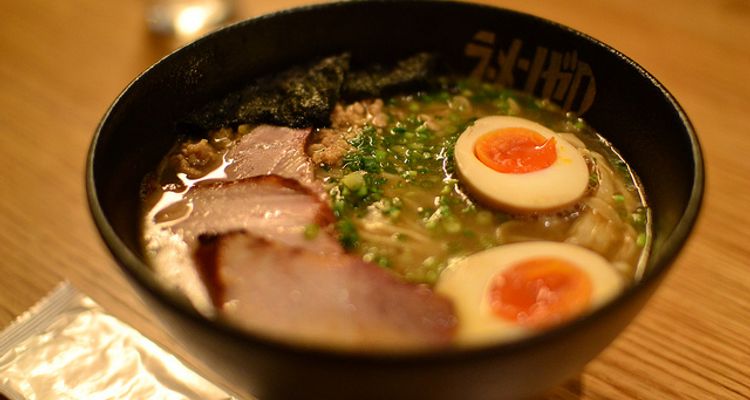 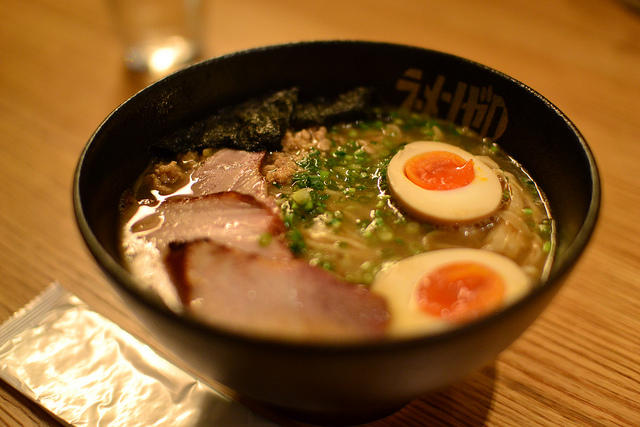 The evolution of Japanese ramen knows no bounds. Here are 15 ramen shops in Tokyo that have been featured in world-renowned restaurant guidebooks. There is just one dish offered at this eatery, yet Ito appeared on the 2014 Michelin Guide. The dish in question is Chuka Soba (中華そば), a simple bowl of noodles with broth made of dried infant sardines, dried bonito and kombu kelp, simply topped with slices of roast pork and chopped spring onions. No preservatives are added so there is no nasty aftertaste.  The place looks as if it is closed from the outside but it is constantly busy with customers, most of which coming from  faraway. This Bib Gourmand ramen shop is on the basement floor of a building in the heart of Ginza. Home made ramen noodles married with broth from dried sardines makes the signature bowl of ramen fit for the award. Above picture is the signature dish, Ogon no Shio Ramen (黄金の塩らぁ麺), which translates as the golden salt-flavored ramen. It is topped with Gorgonzola filled cream cheese on the center, together with chopped Kyoto Kujo Negi.  The chef was a former Italian chef, so there's a hint of Italian cuisine in his dishes. You will be amazed how salty ramen broth goes hand in hand with melted cheese. Formerly known as Chuka Kobo Sakichi, a popular eatery in Choshi, Chiba, it transformed itself and descended in the capital. It uses ramen noodles of Asakusa Kaikaro with chicken-based clear salty broth.  The end result is light but rich in taste. Noodle with soy sauce-based broth is also very good with full-bodied flavor and aroma. You can have a large portion with no extra charge for any noodle dishes.

There is always customers waiting in long line at this popular shop. The broth is combining meat and seafood, so it is rich but light at the same time.  Flat, medium thick frizzy noodle has chewiness in texture and goes very well with the broth. No MSG is used for its bowl of ramen so there is no nasty aftertaste even if you drink the entire broth. The straight, medium thick noodle is dense with an unique texture. It goes well as a dipping noodle, which is also very popular.

This is the Tokyo branch of a famous ramen shop in Kanagawa. Chicken broth combined with soy sauce gravy is simply perfect. Customers say whenever they finish eating a bowl of this Shoyu Ramen (醤油らぁ麺) they would always want for more.  Another popular dish is Yuzu Shio Ramen (柚子塩ラーメン), a bowl of ramen with salt-based broth and a rich citrus aroma of yuzu. Domestic pork meat with abundant back fat is used for its extremely rich and thick broth. You can choose the amount of lard that goes in your ramen bowl. Even you ask for plenty, the broth is sweet in taste and flavorsome with no greasiness. The clear, soy sauce-flavored broth is a combination of Tamari Shoyu from Akita and various free range chickens: Hinai, Jiyou, and Sansui. It is packed with flavors and goes well with straight, medium thick noodle.

Located 2-minutes away from Kojimachi Station (Yurakucho-Line, Tokyo Metro), the signature dish at this eatery is vegan ramen. No animal products are used for creating a bowl of ramen topped with plentiful vegetables. Its broth is made of onion and other vegetables together with olive oil, carrot puree, and seasoned with salt. Clear chicken stock with seafood broth and flavor oil are the basics of Takano's ramen. In addition, it has never used MSG since it was founded. The shop is just outside of Ebara-Nakanobu Station. You will see a long waiting line of customers at all times. Its dipping noodle Tsukemen (つけ麺）is popular too. The most popular dish here is  Nanko Anbai Soba (南高梅塩そば). Chicken stock using the entire chicken is blended with broth using plenty of seafood, resulting in deep, mellow taste.  Adding sea salt from France and Mongolian rock salt elevates this ramen broth to perfection. This is nothing but a masterpiece created by the shop owner. The noodle that goes with this broth is home made,  using domestic whole wheat flour and natural lye water from Mongolia. Hiyashi Ramen (冷やしラーメン- cold ramen) is the signature dish at Toy Box. Hot ramen bowls are also very tasty, be it salt, soy sauce, or miso flavored. You will be spoilt for choice so naturally you need to come back again and again. "Offering healthy and tasty food" is the ethos of this uniquely named eatery.  It uses Agu pork from Okinawa for both its salt-flavored and soy sauce-flavored ramen.  The decor within the shop is stylish and it offers unique dishes like blue-colored ramen and shaved ice (かき氷). It even has a beauty salon within the premises. Now that's definitely not a typical ramen shop.

(This information is accurate as of June 2015）