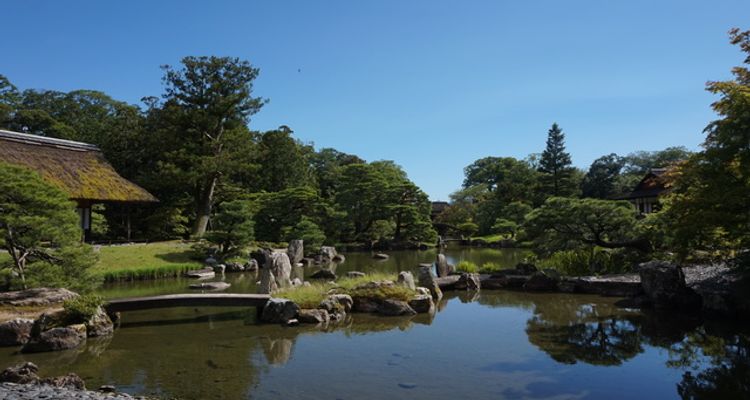 14 Unique Traditional Architectures You Can Only see in Japan

Though most of the old buildings in Japan were lost to fires or natural disasters, some of them survived or were reconstructed in later periods. Here listed below are examples of unique architecture in shape or in concept.

This luxurious portable tea room gilded fully with gold leaf is a faithful replica of the Golden Tea Room built by Toyotomi Hideyoshi, a ruler of Japan in late 16th century. It was used for special receptions with noble guests. If you can imagine how gold would gleam when the few candles in the dark room wavered in the wind, because the light source of the time was limited. This tea room is exhibited at the Museum of Art in Atami.

This reconstructed tea room with two tatami mats and little light source said to have been originally built by Sen no Rikyu in 1582, the tea master for Toyotomi Hideyoshi and the person who perfected the tea ceremony. His idea was that you would not mind the size of the room in the darkness and would concentrate on what you’re doing. To enjoy a cup of tea with his guest was only thing Rikyu pursued.

This tea house was built around 1615 by Furuta Oribe, a warrior and a tea master who studied under Sen no Rikyu. Oribe’s aesthetic was more open-minded than Rikyu. He expanded the basic style established by Rikyu to accept more guests with various status levels in a tea room. It’s well-known as a triple gardened tea house as well.

This tea room was originally built by Kobori Enshu, a tea master who followed Furuta Oribe. He is well-known as a master of construction and garden design as well. The room supported by pillars 7 meters tall was originally a sky-terrace constructed on a cliff. He was good at creating excellent pieces by combining several elements. This reconstructed architecture is in the Shokado Garden Museum in Kyoto.

This 54.8m-tall five-story pagoda located in Toji Temple, built in 796 as a symbol of the new capital, is the tallest wooden pagoda in Japan. The current one was rebuilt in 1644 after a fire. A pagoda is built to house sacred relics and normally has an odd number of tiers since odd numbers are considered lucky.

This 17 meter tall pagoda, originally built in 678 and rebuilt in 1532, boasts the most tiers in the world as a wooden architecture extant. There are many thirteen-story pagodas made of stones but none made of wood except for this one. There are only tiers above the first floor.

This pagoda is the Japan’s biggest wooden taho-to, a unique form of Japanese pagoda with cylindrical inner sanctum on a square base and two stories, which is unlikely for Buddhism pagodas. The model of pagodas in this style was apparently a pagoda drawn on the mandala, meaning they are based on a pictorial image. Although to make cylindrical building with linear timbers sounds astonishing, a good number of this type of pagoda exists in Japan.

This 18.75 meter high pagoda, built around the 14th century, is the only one octagonal pagoda extant in Japan. Others were lost. While it looks like it's four stories, it’s actually three stories. The lowest roof is a pent-roof without any internal floor used as a decoration uniquely in Japan.

This 16.5 meter tall unique building, built in 1796 in Aizu, Fukushima, has no floor. It's made of only a double-helix staircase inside to make the equivalent of a pilgrimage to 33 Kannon temples in western Japan. The name ‘sazae’ refers to a kind of conch shell. It has six walls and six central pillars, while a pagoda normally has only one central pillar. Six is a number considered to symbolize the action of circle in Buddhism. This is the only extant structure in Japan built this way.

This church, designed by French priests, was completed in 1902 in Sasebo, Nagasaki. After the lifting of the ban on Christianity in 1873, a number of churches were built especially in the Nagasaki region. This church is made of bricks and wood. The altar floor is covered with porcelain tiles from nearby Arita and attendants used to be seated on tatami mats. Japanese carpenters who had never seen Western architecture tried to reproduce it despite the lack of money. The grains of the rib vault ceilings made of cheap plywood are drawn by the hands of believers. Kyara no Gosho is only one reconstruction of mansions from the Heian period (10 to 12th century). This architecture, situated in Esashi-Fujiwara Heritage Park, allows us to imagine the aristocrats’ life in 12th century. There were basically few walls inside. Large spaces were partitioned by screens or furniture for different uses. They were designed for political or religious ceremonies rather than for comfortable living.

The oldest part of this villa, approximately 70,000 square meters including its beautiful garden, was built in 1624 in Kyoto by a member of royal family. After the first construction, the father and the son continued to add to their villa until 1663 in order to meet their needs. This villa, a compilation of architectural elements from several periods, is considered as a fine example of Japanese architecture.

This 3m by 3m hut situated in Shimogamo Shrine in Kyoto was a reconstruction of residence of Kamo no Chomei (1155-1216), a great poet, essayist, and string music player. The man, who once worked for the Imperial Palace but was disappointed with his career, built this knockdown hut in his later years. Half of it was used for daily life, the quarter for prayer, and another quarter for his artistic practice. It’s an example of ultimate minimalist life of a commoner.

This restored theatre in Kagawa was originally built in 1835 and is the oldest kabuki theatre extant in Japan. Kabuki plays are performed once a year in April by professional actors and during the rest of the year visitors can look around the theatre including backstage. The characteristic tricks in kabuki plays are all controlled manually, using lighting, trap cellars, elevating stages, revolving stages, suspension over the passage stage, and a latticed ceiling to throw confetti over audience.