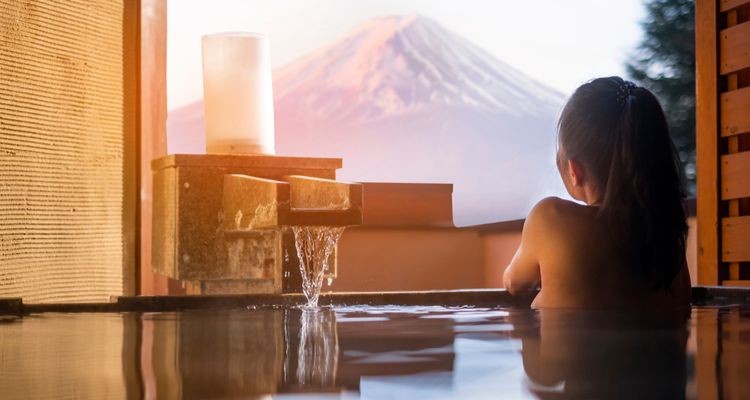 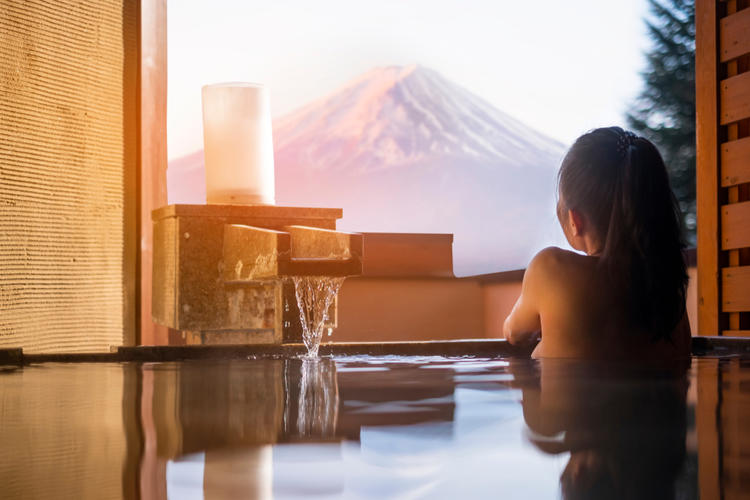 These twelve Japanese hot springs are wonderful destinations due to their scenery, location, color, architecture, and other reasons. The JR Gono Line runs along the Aomori coastline next to the Sea of Japan and on that line sits Furoufushi Onsen. It's a natural hot spring with reddish-brown water from the iron that comes in from the beach, but it's hidden in the ocean in times of bad weather. When you enter this bath, your eye level is exactly at sea level. There's a simple dressing room directly next to it, as well as a mixed bath and a women's only bath. There are several baths where you can lazily gaze at Mt. Fuji while you soak, but this Chame Yudono bath at Toki no Sumika is especially recommended. There's nothing to interrupt you from enjoying the splendid vision of Mt. Fuji directly in front of you.

This is an open air bath from which you can breathe in the scenery in Akazaka Hot Spring Village's Higaeri Onsen-kan. The bath is connected to both the Pacific Ocean and the sky. It was designed the same as the rooftop pool at Singapore's Marina Bay Sands, and the construction is splendid. There is a ryokan inn so you can stay the night. Their nigori-yu sulfur bath is popular. The Manza Prince Hotel, Nisshinkan, and Juraku are also very famous. The nigori-yu is a beautiful emerald green that stands out from all the white hot springs. You can soak yourself in the water to your heart's content while gazing at the mountains surrounding you. This onsen is near Shikoku's famous Kazurabashi. The Hotel Iya Onsen is in a valley, so the cable car that takes you 170m down towards the hotel is also famous. It's a large cable car that holds around 10 people, and it moves with the single press of a button. There is no driver. This is an onsen that's been very popular lately. It's an onsen within an onsen spa reort in Gunma prefecture. The four open air baths that cover almost 720 square meters come from four running springs. The appearance of the mountain springs and the width of the baths makes it very appealing as a winter trip. Mixed bathing is allowed. This bath is called the Genroku furo, and the space above the wide bath is adorned with a bridge. Another famous bath here is the sunamushi bath. You lie down on top of warm sand and then you're covered with more sand, but when you enter the sunamushi bath your blood circulation improves and it's said to be especially good as a detox. However, this onsen does not allow day-trips so you will have to make an overnight reservation. Kanaguya is one of the buildings part of Shibu Onsen, which is near Jigokudani Park, famous for monkeys bathing in natural hot springs. It's a wooden, four-story building where tradition and modernity coincide. Nowadays in Japan it's rare to find a wooden four-story building that you can stay in, and it's said that it was used as a model for Hayao Miyazaki's movie Spirited Away. They do not allow day trips, so you will have to make an overnight reservation. The Tsuru no Yu bath inside the Nyuto Onsen spa is known as one of the hot springs you should visit if you're an onsen fan. The mixed gender open-air bath is famous for the cloudy appearance of the water. Also, the attached lodging house called Honjin is a simple row house with a thatched roo, so if you stay there you can fully experience traditional Japanese architecture. This area has been used as filming locations for movies.

There are many onsen in Japan that are called sky onsen. Among them, Yamanashi's Hottarakashi Onsen is especially known for being a hot spring where you can enter the bath and enjoy both the sunrise and the night scenery. On days with nice weather, you can see the faraway figure of Mt. Fuji. The names of the baths "acchi no yu" ("that bath") and "kocchi no yu" ("this bath") are also rather unique. Suyaku Onsen is well known for being the place where the most snow in Japan falls. Here their most famous bath is called the Sennin Furo ("the thousand person bath") made from Aomori cypress wood. It's a mixed bath but it is split into two areas for men and women. It's recommended that you visit after a huge snowfall. This onsen is in the elevated part of the northern area of Awaji Island. It's a simple onsen area for day trippers, but from the open air bath you can see Akashi Kaikyou Bridge, the world's oldest suspension bridge. After you finish bathing, having a beer on the terrace where you can gaze out on the Seto Inland Sea and the townscapes of Akashi and Kobe is exceptional. Stopping by Akashi's Uo no Tana shopping street on your way home is a good idea for souvenirs or a snack.