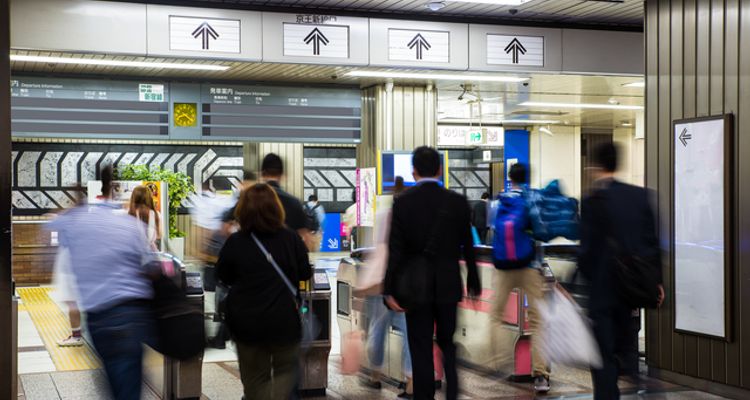 Here are 11 easy steps on how to get to your destination by train in Tokyo.

Trains runs like veins through Tokyo. I am rather literally. Walk around the city, and you will find subway entrances, train tracks, trains itself all over the place. You can't say you've experienced an aspect of Tokyo without experiencing a train ride. Here are 11 easy steps on how to get to your destination by train in Tokyo. Yes, I know it sounds silly. It isn't. If you're mainly using trains that do not go underground, finding a station should be relatively easy. The cities can be tricky to get around, so ask someone or use your devices to guide yourself. If you're using the subway, brace yourself and be alert. Don't miss signs for the metro, or sign posts indicating the location of the entrance to the station. These entrances are usually subtle and can be easy to miss.

Finding your train line and buying a ticket can't be that hard. Can they? Let's take a look of the Tokyo train map. Intimidating, isn't it? As you can see, many lines over lap with each other, causing transitions between lines. If you only have to use one line, buy the ticket according to your information source. Navitime is a great smartphone app when you're looking for a train route. If you're going to use 2 or more lines, keep in mind where you're transitioning at and what line you're using. Fees differ from these factors. Or just ask the station staff.

If you've found your line, you've probably figured out how much your ticket is. For reference, watch this video. By this point, I think you'll understand riding a train in Tokyo is not a laughing matter. Keep in mind of the line you're using, and look ahead for signs. The more lines included, the more difficult it's going to be to find. Big stations like Tokyo, Yokohama, Shinjyuku, Gotanda are going to be tricky. Find where your train's going to be at.

5. Get on your right train Trains don't always stop at one stop and another. Trains have different types according to how often they stop, where the last stop of the train is, where they transition, and so on. In general, look at the signs for 各停(stops at one station each), 急行 (stops at several stations), and 特急(stops at 3-4 stations). If you want to stick safe, use a 各停 train. Sometimes these expressions change via line. Beforehand research is always good. Please refer to my previous post for train etiquette. In summary, use your head and don't do things that may cause inconvenience in such a small space aka. inside of the train. Announcements are important. It can tell you what's the next stop, the designation of the train, and so on. Announcements made from the train conductor are in Japanese. If you don't understand the language, ask the person next to you who looks the most peaceful on what it's about. If you don't have the courage, and the train's not moving, it probably means an accident or a malfunction happened, causing the delay.

8. Get off the train If the train and station is reasonably sparse, go on your merry way. If you're using the busy hours, and there's a lot of people out there, stay calm. Go with the flow. You will find your way. If not, raise your voice a little, and you'll be lucky. Also, be careful of the train gap. I once dropped my mp3 player there. After getting off the train, follow the sign posts and go to your line transition point or exit. Regarding exits, there is not always one exit. There can be 2, 3, 4, exits. Usually the number rises according to where the station is located. If it's located in the busy area, there's going to be a lot of them. Always research beforehand, or ask someone on which exit you're going to use. Or else you're going to end up lost in the labyrinth of the Tokyo subway.

10. Don't worry, you're getting there If you feel like you're walking for forever, don't worry. Since the public transport decided to connect as much lines as possible, they've created a complex system. Therefore, it can be a long way to get to the outer world. Walk on. You're on your way.

11. You're done! Get to your destination! You have survived the Tokyo train ride. Congratulations!

If you paid too much for your ticket, and still have it, you can keep it. It'll be a great souvenir. By the way, train tickets are recycled into the toilet paper, benches seen in subways and so on. Ain't that neat?

If you want to know more about Japanese train system, check this article as well: