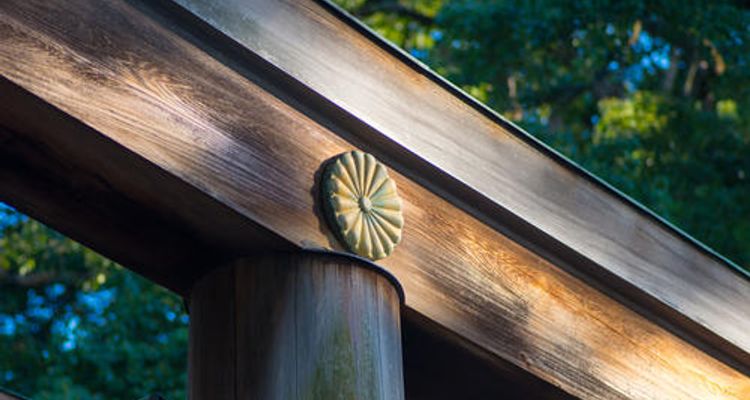 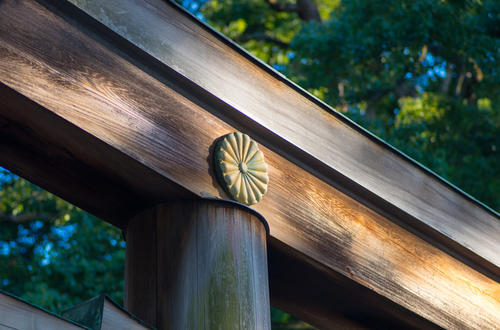 10 Tokyo Shinmon: Traditional Crests That Tell You a Lot About Their Shrines

Every shrine has its own “shinmon,” or emblem. The emblem was determined according to the history, tradition and the deity worshiped, therefore you can understand more about the background of a shrine by studying its emblem. Here are 10 of the shinmon found in Tokyo’s shrines.

Mitsudomoe, trio of shapes that resemble commas, is a popular crest often used for various shrines. Originally mitsudomoe represented Hachiman shrines which worship the syncretic divinity of archery and war, but now the usage has expanded to many other sects.  In Tokyo, Tomioka Hachiman is one of the famous examples which use mitsudomoe as their shinmon (temple crests).  Mitsudomoe can also be found in temples. This one is similar to mitsudomoe, but each form of the emblem is elongated, which gives the impression of a movement, thus the addition of "nagare" ("flow) to the name.  This emblem also has the nickname of “slugs.”  Kanda-Myojin, which uses this emblem as its shinmon, was said to be built on a bog which was full of slugs.  Kanda-Myojin is also famous for its sacred horse, and the horse sports a jacket with this emblem. Chrysanthemum (kiku) is popularly used as a motif for many shrines, but Kikuka Monsho in particular is a symbol of the Imperial Family.  Therefore this emblem is found in the shrines which are connected to the Imperial Family. Meiji Jingu, which enshrines Emperor Meiji, is one example. The emblem is often seen on top of the torii gate, or on a large illuminated display. But there are many others… you might discover many smaller emblems ensconced in some unexpected spots if you look closely. Mitsuba-Aoi features a trio of leaves ("mitsuba"), and it represents the shrines connected to the Tokugawa, the family of the great shogun from the Edo period. Nikko's Toshogu is the most famous and is where the shogun himself, Tokugawa Ieyasu, is enshrined. In Tokyo, there is also Shiba-Toshogu near Tokyo Tower. Although not the largest shrine, the premises is rich with shinmon. Ine, or rice, is the traditional main staple of Japanese cuisine, and it was regularly offered to God. Ine-mon is often used as the symbol of Inari shrines, which worship the deity of agriculture. In Tokyo, it can be found in Oji-Inari Shrine.  The Ine-Mon of this shrine also features the kanji character for king.  Each Ine-mon emblem has its own feature unique to the shrine it represents. Ume-mon represents the shrines which enshrine the legendary scholar/politician Sugawara no Michizane of the 9th century. Ume, or plum blossoms, are said to have been loved by Michizane, thus this crest was created. Michizane’s shrines are typically named “Tenmangu” or “Tenshin,” and are worshiped by hard working students studying for entrance exams. Yushima Tenmangu is especially famous in Tokyo. In the early spring, the real plum blossoms splendidly compliment the Ume-mon emblems in the shrine premises. Not to be confused with the infamous Nazi symbol, manji were originally Buddhist crests. Tokyo's Nezu Shrine has used manji as its shinmon throughout its history, as its function was somewhat ambiguous between a shrine and a temple up until the Meiji period, when it became definitively a shrine. From April to May, Nezu Shrine is famous for the splendid azalea blossoms. Shichiyo-mon, which consists of seven circles, represents the shrines which worship Myokenbosatsu and the Big Dipper, also used by the once powerful Taira clan. Shichiyo-mon can be found at the historic Torigoe Shrine in Akasaka. The ancestor of the chief priest of this shrine was said to be a staff member of the Taira clan back in the day. The hexagon shaped Kikko-mon is meant to remind you of a tortoiseshell. Many kikko-mon feature a kanji character or another graphic symbol in the middle of the hexagon frame. This style is often used by shrines which are affiliated with Izumo-Taisha, which is known as the residence of Okuninushi, the deity of marriage. In Tokyo, there is Izumo-Taisha Tokyo Bunshi in Roppongi. Its Kikko-mon features the kanji for large or great.

Hauchiwa-mon represents a fictional creature “tengu,” a legendary messenger of the deities. Tengu are red faced with a long nose, and carry a large leaf which is used as a fan to cause gusts of wind.  The name of this emblem “hauchiwa” means a fan made of a leaf, true to this tengu legend. Toranomon's Kotohira Shrine features this shinmon, as legend has it that a tengu once came alive in this shrine.  A live tengu character is the star during the shrine festival.