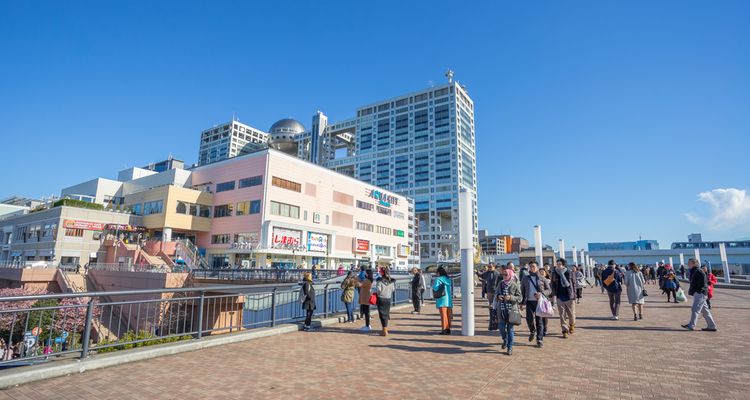 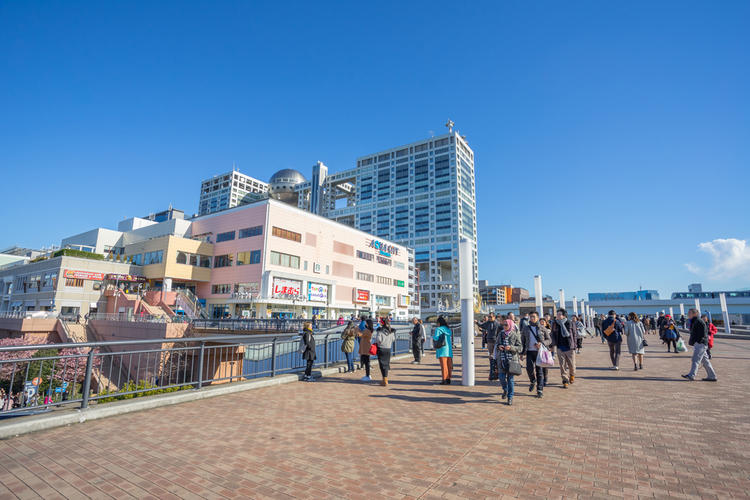 Odaiba is one of Tokyo's leading sightseeing spots with its many exciting places to explore. Switch up your travel plans with a stroll through the ocean-side park, a visit to the Gundam, go shopping or a ride on the high-tech attractions. Regardless of what you choose to do, you're bound to have a day full of fun! Here are 10 recommended sightseeing spots in the Odaiba area that you can enjoy with your significant other, friends, and even your family!

Rainbow Bridge, which acts as a symbol of Odaiba, is a 798m-long suspension bridge that connects the Shibaura district to the Daiba district. It has a prominent image as a great spot to drive through to view the night scenery, but there's actually a pedestrian lane here as well so you can walk across it! There are 2 routes: a north route and a south route. Along the north route, there's an excellent view of the cityscape including Tokyo Tower, while the south route opens up to Odaiba. It's recommended that you go roundtrip and take both routes if you're interested in seeing both sceneries! The bridge is lit up at night so you can enjoy the romantic atmosphere it exudes. Usually it's lit up with white lights, but sometimes it's lit up colorfully in pink or rainbow colors. You'll be able to gaze out at Rainbow Bridge from places like Daiba Park.

Tokyo Joypolis, which is located within DECKS Tokyo Beach, is an indoor amusement park where you can still have fun even on a rainy day! It's loaded with plenty of attractions like rollercoasters, shooting games and haunted attractions, all of which utilize the latest in technology. Not only is it great for couples and groups, but it also makes for a fun trip for families with young children! How about making a trip over for an exciting day of fun?

DiverCity Tokyo Plaza is comprised of popular Japanese and international fashion brands, restaurants, and entertainment facilities, and is bustling with visitors every day. The giant Gundam statue (RG1/1 RX-78-2 Gundam Ver. GFT) was particularly a big attraction and symbol of this building. Many people made their way over to DiverCity just to see this Gundam in real life, but this particular exhibition ended in March 2017. In the fall of 2017, however, a new Unicorn Gundam replaced it, so you'll still be able to see a life-size anime robot come to life!

The Fuji TV Headquarters Building is another symbol of Odaiba. A total of 5 areas are open to the public: "HACHITAMA" Spherical Observation Room on the 25th floor; the spherical studio set Mezama Sky; the 7th floor rooftop garden; Fuji TV Wonder Street, an area that displays panels, clothes, and other props used in popular TV shows; and the Theater Mall, which houses the Chibi Maruko Chan Cafe. Fuji TV Wonder Street also has many special videos and displays that you can only see here! If you're a fan of Fuji TV shows, you'll definitely want to stop by.

Odaiba Seaside Park, which is sometimes referred to as Odaiba Beach, is a park with an artificial sandy beach and an observation deck that is always buzzing with families! The beach is a popular spot to get a gorgeous view of Rainbow Bridge and the night time scenery. You can sit down on the beach and spend a luxurious and relaxing moment here! Another must-see in this area is the Statue of Liberty statue located in the promenade stretching out towards Symbol Promenade Park. This 12.25m-high statue was revealed in December 2000, and is yet another major symbol of Odaiba.

The Palette Town Giant Sky Wheel is a giant 115m-tall Ferris wheel located inside Palette Town. The night view of Tokyo that can be seen from this Ferris wheel is considered one of the most beautiful in Japan. There are 64 gondolas in total, of which 4 have see-through floors and walls. Look down at the views below you and you'll be greeted with a stunning spectacle that will take your breath away. One of the top highlights of this attraction is the illuminations at night. The gigantic Ferris wheel is gorgeously lit up in many different colors, creating a romantic vibe, so how about gazing up at this sight from below?

You'll definitely want to include onsen (hot springs) into your travel itinerary! Odaiba Tokyo Ooedo-Onsen Monogatari is the largest onsen amusement park in Japan. Special events are held regularly, and there are many fun attractions such as ninja star throwing, scooping up tiny dolls with nets from water, and water balloon fishing! The onsen facility is also fantastic, with many options including taking a dip in the natural hot springs, enjoying a foot bath dressed in a yukata (light cotton kimono), relaxing on top of natural Himalayan rock salt at the rock salt sauna, and more. Go to Ooedo-Onsen Monogatari for a fulfilling hot spring experience!

8. Miraikan - The National Museum of Emerging Science and Innovation

Miraikan is a museum where you can see cutting-edge science and technology. Its chief executive director is Mamoru Mohri, a former astronaut. The facility's symbol is the globe display Geo-Cosmos, which features real-time images of Earth and all its atmospheric weather and ocean patterns as seen from outer space. In the permanent exhibition area, there are various displays with materials that explain in easy-to-understand terms about scientific topics like neutrinos and iPS cells. There are also interactive games where you can learn hands-on about the latest in science and technology in a fun way! If you have time in your schedule, you should also check out the Dome Theater (reservations required), which shows films and planetarium projections. It's not every day that you get the experience to see these dynamic CG images from up close!

If you have small children with you and you're looking for a good place to go, you'll want to check out LEGOLAND Disocvery Center Tokyo! This indoor facility is located inside DECKS Tokyo Beach. It has numerous attractions and activities like MINILAND, which displays famous spots in Tokyo built from LEGO blocks, and the Kingdom Quest shooting game ride. You can also buy LEGO blocks in bulk at the shop. Bring your LEGO-loving kid here for a fun-packed day!

At the Museum of Maritime Science, you can learn about ships and the ocean. There are outdoor exhibits such as Soya, an Antartic exploration ship built in 1938, and you can view the inside of the ship. There are many things to see, such as the captain's public room, the communications room, and the wheelhouse, all of which would excite any true ship fanatic! There are also many other valuable displays, such as the main battery of the Japanese battleship Mutsu and a deep sea submarine. You can try sailing out on a sailing canoe as well, so be sure to check out the official website if you're interested!

Enjoy Odaiba to the Fullest!

Odaiba has a plethora of fun things to do and places to see for people of all ages. There are many popular sightseeing spots, but the truly great thing is that they're all located quite close to each other, so you'll be able to go around to several places in a day!