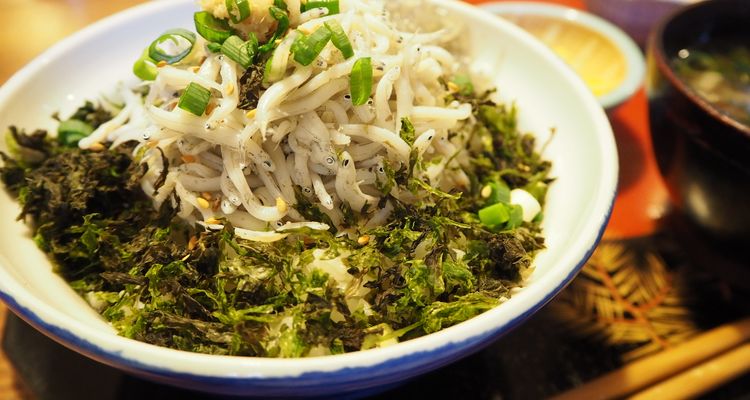 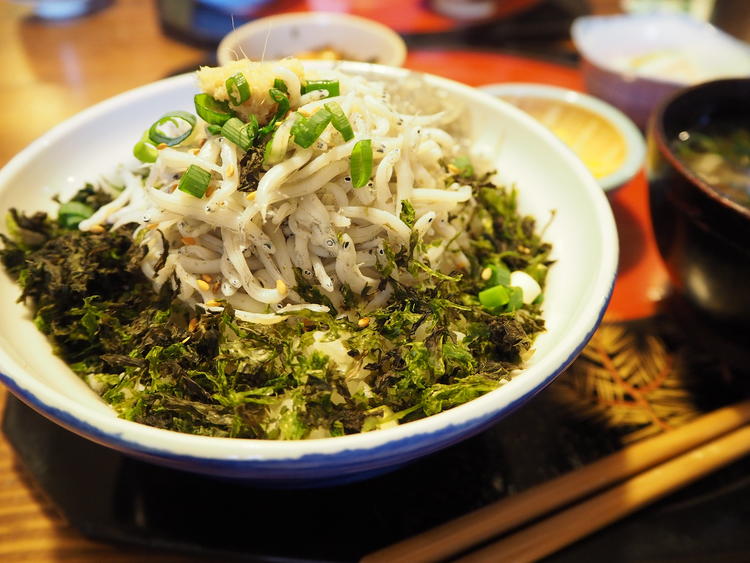 There are a lot of unique dishes made with fresh, delicious local ingredients in Wakayama, a prefecture blessed with abundant nature. From reasonably priced dishes to ones that are a bit on the luxurious side, this article will introduce 5 local dishes and ingredients of Wakayama that you should definitely try, as well some of the recommended restaurants that serve them.

Tofu is well-known as a healthy food, but there are probably not that many people who know about koyadofu, which is frozen, aged, and dried tofu. It is named after Mt. Koya, a mountain in Wakayama where it is said Buddhist monks once trained and discovered how to make this unique meal.

Koyadofu needs to be boiled in broth before cooking. The chewy texture and the broth that spreads as you chew offer something different from normal tofu. It can be served either by itself or cooked with some vegetables.

Nakamoto Meigyokudo is a souvenir shop selling mostly Buddhist articles, but you can have koyadofu in the shop's cafeteria. They have a variety of dishes such as Seishin Ryori (vegetarian cuisine originally derived from the dietary restrictions of Buddhist monks) and tempura teishoku (set meal), that come with koyadofu, as well as sesame tofu and white tofu.

Koyadofu comes in small bite-size form, but the rich flavor fills your mouth as it has been soaked in broth. Dried koyadofu is sold at the shop, so if you liked it you can bring some home with you.

Koyadofu is often served as part of Seishin Ryori. This type of cuisine was originally meant for ascetic monks and does not include fish or meat, so it can be enjoyed by vegetarians. If you are not a vegetarian, however, and especially if you like fish, Shunkai is the best place to try koyadofu. Here, you can enjoy koyadofu as a side dish along with fish.

You can enjoy the traditional koyadofu and delicious seafood at the same time, which is quite the experience! It is often considered a side dish, but if you take time to appreciate it, you can really enjoy the rich taste and depth of koyadofu. Kue is a saltwater fish caught in Wakayama that often grows over 1m in length and is known as a high-class fish in Japan.

While it can be eaten as sashimi (raw), it is more often used as an ingredient for nabe (hot pot). It has a light, yet rich taste, and the umami (Japanese savory taste) of the kue seeps into the soup and vegetables, resulting in a truly superb dish.

Fusya is a restaurant where you can enjoy natural kue meals throughout the year. They have multiple course meals, but all of them have kue-nabe as the main dish. Here, you will be able to sample thickly cut kue.

With the course meal, you can have fried kue as well as kue sashimi. You can see how it changes in taste according to how it is prepared! As is expected of a restaurant that specializes in high-class kue cuisine, the facade of Fusya looks luxurious. You will be greeted by the wooden sculpture of kue at the door. The course meal is available from 10,000 yen, so it is a bit expensive, but if you have come all the way to Wakayama, you ought to give it a try!

Ikesu Marouda is another restaurant specializing in kue, and you can have fresh kue there all-year-round. The nabe is available from around 5,000 yen, which is relatively reasonable. The kue-nabe is delicious by itself, but it is even better when eaten together with some condiments such as sesame seeds and green onion.

There's no nabe during lunchtime, but you can have other kue dishes from around 2,000 yen. It is an ideal place for those who want to try kue cuisine at a relatively reasonable price.

These small, white fish are called shirasu. The word "shirasu" doesn't actually refer to one specific type of fish, but rather to the juvenile fish of various species including sardine and eel. A lot of shirasu is caught in Wakayama, so there are many restaurants that serve shirasu-don, a bowl of rice topped with shirasu.

There are generally 2 ways of preparing shirasu for shirasu-don: boiled and raw. Boiled shirasu is mildly salty and has a soft texture, while raw shirasu is mildly sweet and thick. It may look kind of grotesque, but it is a must-try!

Kadoya Shokudo is a restaurant where you can enjoy a bowl of either boiled shirasu or raw shirasu. You can also have sashimi and udon noodles that come with shirasu-don at lunch time. Shirasu can spoil easily, so not many restaurants can offer raw shirasu. Here at Kadoya Shokudo, you can have raw shirasu all year, but if you want to try the freshest catch, it is recommended to try in October, when there is more shirasu caught than in any other month.

The area around Kadoya Shokudo is a traditional architecture preservation district called Kisyu Yuasa, and, being close to the station, is a popular sightseeing spot.

They serve a variety of shirasu-don here. You can enjoy various ingredients in one bowl, such as salted salmon roe, salmon, sea urchin, and even umeboshi (pickled plum).

This green, ball-shaped food is called mehari zushi. It is a traditional rice ball from Kumano region, which stretches across the border of Wakayama and Mie. Normal rice balls are wrapped in nori (seaweed), but mehari zushi is wrapped in salt-pickled takana (mustard greens) instead. The vivid green of mehari zushi looks beautiful. It was initially a simple dish of rice ball wrapped in takana, but now you can find it with fillings of salmon, fish roe and more.

Here at Mehariya, you can have a set meal of mehari zushi that comes with oden (dish of various ingredients stewed in broth) or kushikatsu (deep-fried skewered ingredients). Mehari zushi is surprisingly big (8cm), but if that alone is not enough for you, the set meal might be a good option.

The mehari zushi they serve here has a stalk of takana inside. Also, they have ones with seasonal ingredients or a whole shrimp tempura. You can order your food for take-out as well.

Mehari zushi tastes a little bit different at each restaurant. In its basic form, it is pretty simple, so each restaurant's own touch really stands out. In Meharihompo Sangenjaya, they add yuzu (a citrus fruit) when pickling the takana that gets wrapped around the rice. A slight scent of citrus gives it an extra freshness!

You can order the mehari zushi as take-out, but if you have time, you should try their soba set. The black soba noodles are called "inaka soba," and they have a firm texture and rich flavor.

Kumano beef is a refined breed of Wagyu (high-quality Japanese beef) that has long been raised in Wakayama. This kind of beef is not often distributed elsewhere, so it is hardly seen outside the prefecture. The high quality of the meat can be seen in the fine marbling of the fat. The savory smell when grilled is one characteristic feature of Kumano beef. Upon putting the meat in your mouth, the delightful taste of melting fat spreads. Also, it is not as greasy as it looks, so it is actually quite easy on the stomach.

Here at Hige, you can enjoy a variety of cuts of grilled Kumano beef. The fat melts quickly, so you only need to grill it lightly. They also serve locally produced pork and chicken.

During their lunch hours, you can have the Kumano beef set meal for only 1,500 yen. The meal consists of Kumano beef, salad, rice, kimchi, and miso soup. The price for this much food of such high quality is an absolute bargain. This is the place to go for those who want to casually try Kumano beef.

Although they are a BBQ restaurant, they also have dishes such as beef curry. The beef used for the curry is not Kumano beef, but the curry is still hearty, delicious, and full of meat. Although it is not a curry restaurant, their curry is as good as the ones served in the specialty shops.

If you don't mind waiting in line, Kumano is a highly recommended place to visit. The restaurant, run by a butcher, serves steaks made from Kumano beef. They also take reservations in advance, so you don't have to wait in line. While all their meat dishes are delicious, you absolutely can't miss Kumano beef. You can enjoy a Kumano beef course with starters, salad, rice, drinks and dessert, all for around 5,000 yen.

The dishes and foods introduced here are all pretty hard to find anywhere else. Enjoy Wakayama cuisine and gain a deeper understanding of the area itself through these gourmet options!