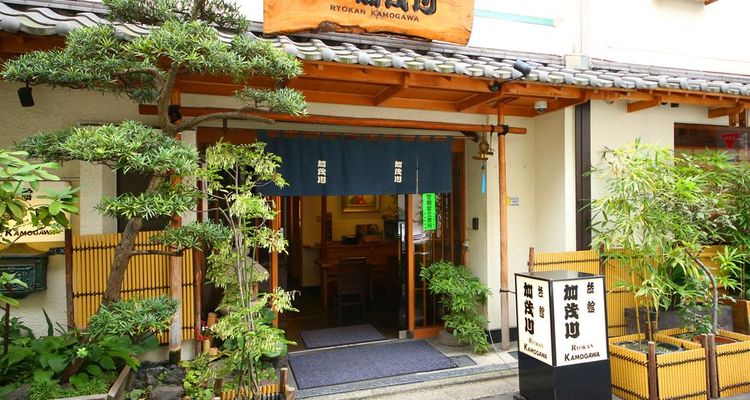 10 Recommended Japanese-style Ryokan Overflowing With the Essence of Tokyo

Although there are lots of modern hotels in this day and age, here are some recommended ryokan for people who would like to enjoy an atmosphere that’s a bit different than usual or for anyone who would like to spend a tranquil moment in a calm, Japanese-style room.

Its location is a 1 minute walk to Sensoji Temple, just a little way from Nakamise, which is always bustling with tourists. It’s also just a 4-minute walk to the Sumida River water bus. Actually, there’s a way to have fun even when all the shops at Nakamise are closed: You can look at the "Asakusa Picture Scroll", which is 380m in length and drawn on all of the shop shutters. You can use the free Wi-Fi offered in the guestrooms, which are all Japanese-style and come with a bath and toilet attached. They also have smaller, one-person rooms, so even solo travellers can savor the feeling of staying at a Japanese ryokan. There is a large bath house and tearoom in the building, as well as a breakfast service that's available for an additional fee.

Standing in a quiet residential area, this historical building is registered as a Tangible Cultural Property of Japan. The inside of the building is purely Japanese-style with a calm atmosphere, and gives off a feeling of having slipped back in time to olden Japan. The guestrooms are equipped with everything you need to spend your time comfortably, including an air conditioner/heating unit, TV, safe, free Wi-Fi, and more. There’s also a large, 24-hour mineral hot spring where you can cure the tiredness from your travels. In Hongo, there is Tokyo University, as well as lots of old historical buildings and secondhand bookstores. The area around Tokyo University has cafes and restaurants where you can enjoy eating at reasonable prices.

A picture of Tokyo University.

This inn is located in the heart of Asakusa, just a short way from Nakamise and only a 2-minute walk from the nearest station. Even though Nakamise is always crowded with people, it’s recommended to wake up early while there isn’t many people and take photos in front of Kaminarimon (Thunder Gate). Also, Sensoji Temple lit up at night is incredibly magical and the atmosphere is very different from the way it is during the day. This Japanese-style ryokan which blends in with the downtown atmosphere of the area is a surprisingly calm inn where you can forget the clamor of the city. There is free coffee, green tea and black tea in the lobby, and all the rooms have a bath and toilet attached, as well as free Wi-Fi. It’s a 1 minute walk to the convenience store and a 5-minute walk from a 24-hour supermarket, making it a convenient and pleasant environment for travellers.

A photo of Kaminarimon (Thunder Gate) during the quiet hours.

This inn still has the atmosphere of the Showa era and is located in Yanaka. The surrounding area has many temples and areas where you can feel Japan’s history. A nearby popular spot is Nezu Shrine, which is famous for their azalea gardens where you can enjoy Senbon Torii gates and different varieties of azalea flowers. If you walk a little further, there is the Yanaka Ginza downtown shopping street, which has shops selling folk crafts and small Japanese-style accessories, restaurants, souvenir shops and more. Every part of this street gives off a nostalgic feeling. The family-run, cozy inn has free Wi-Fi, a coin laundry, and free coffee/tea. Occasionally, they might perform a traditional Japanese “shishimai" (lion dance). You can comfortably while away the hours while gazing at their traditional Japanese garden from their wood and ceramic baths.

A photo of the Senbon Torii gates and azalea gardens at Nezu Shrine.

In an excellent location for sightseeing in Asakusa, you can savor the atmosphere of Edo. Not only the exterior, but even the interior is carefully designed in a Japanese-style, with Japanese-style guestrooms, as well as a room made to look like an old warehouse (used for storing goods in the past). There is also free Wi-Fi that you can use. They also have a paid service called “Edo Shumi Plan”, which consists of games from the Edo period, as well as a tour of famous places and historic spots. In addition to being within walking distance of famous Asakusa places like the Sensoji Temple and Kappabashi Kitchen Town, you can get to Akihabara easily from Asakusa Station via the Tsukuba Express. Also, there is a shuttle bus running every day that connects Ueno, Asakusa and Tokyo Skytree.

This Japanese-style ryokan is situated in the heart of Asakusa. Built in the 1950s and remodelled in 2011, it still gives off a strong impression of that bygone era. The natural onsen bathhouse “Jakotsuyu” is extremely close by. It’s a historical building that has been running since the Edo period. The building has all sorts of facilities to make your stay comfortable, including a common room with cable TV that has about 60 foreign TV channels, as well as free Wi-Fi, coin laundry machines and a free coffee/tea service. It’s located just a 3-minute walk from Tawaramachi Station on the Ginza Line, so foreign guests can visit the popular Ginza area in just 15 minutes.

A photo of Jakotsuyu in the neighborhood.

This inn is situated in the residential area of Ogikubo - which was voted Tokyo’s no.1 area where people would like to live - and the building has been registered as one of Japan’s Tangible Cultural Properties by the Agency for Cultural Affairs. Built in the early days of the Showa era, it still retains that nostalgic atmosphere. Although it’s an old building, the inside has been well-kept and all the rooms are designed to give you a view of the garden. It has a different flavor to a modern hotel and without a doubt, the inn has been meticulously designed to give you that feeling of having slipped back in time to the start of the Showa era. It’s convenient to go anywhere from Ogikubo Station. There is a shopping center adjoining the station and there are many shops in the area.

An image of the bright and bustling Ogikubo Station.

This inn is located a little way off from the ever lively and crowded Nakamise in Asakusa. It’s a convenient area for shopping and dining. One should particularly take a look at the tendon restaurant “Tempura Daikokuya”, which has been in business since the Meiji era. It’s recommended as a great inn for landscape views. The interior of the inn has rooms which gives you a view of Sensoji Temple at night, and there is a hinoki (type of cypress) bath where you can see Sensoji Temple’s 5-story pagoda, Skytree and more. For an additional fee, you can have a Japanese breakfast service, and there is also free Wi-Fi available in all the rooms. No matter where you need to go, this is a convenient area. Using the Tokyo Metro Ginza Line, you can definitely get to Ueno and Ginza, and areas like Harajuku and Shibuya are also easily accessible.

A photo of Sensoji Temple at night.

This inn is constructed in such a way that you forget that you’re in the heart of the city. Its entryway is modelled after a hot spring hotel, calming guests and putting them at ease. Located along the Seibu Shinjuku Line, it’s only one station to Takadanobaba Station on the JR Yamanote Line. Along the train line is the spacious Shakujii Park that is surrounded by greenery and nature. In spring, the cherry blossoms there bloom quite magnificently. Designed to suit various needs, all the guestrooms have a bath included, as well as free Wi-Fi. There are Japanese-style and Western-style rooms, and even a luxury room that comes with its own exclusive open-air bath. There is also room service available for an additional fee, and they offer everything from luxury cuisine like Japanese kaiseki ryori (several course meal) and Wagyu (Japanese beef) shabu shabu to reasonable offerings like ramen and curry rice.

An image of Shakujii Park during the cherry blossom season.

Although this might not be an area that first time visitors to Tokyo are familiar with, it’s in the same area (Taito Ward) as other places like Asakusa and Ueno. The neighborhood has many restaurants and convenience stores. You can walk to Asakusa and Ueno and experience the feeling of the working class that still lingers at many of the streets and shops along the way. Minowa Station on the Hibiya Line is close by, so you can access Ueno, Akihabara and Roppongi directly. All the rooms are comfy tatami mat Japanese-style rooms with free Wi-Fi, and there is a lounge with free drinks. For breakfast, they offer a selection of set meals for a reasonable price. Also, inside the building, you can have fun discovering the various antiques curated by the owner.

A picture of Roppongi, which is directly accessible by train.

In Japan, there are certain types of lodgings called “Ryokan”, which are commonly seen in hot spring areas. However, even in Tokyo, there are still some in downtown areas that have retained their Showa era appearances. Wouldn’t you like to spend your time in such a cosy space in these nostalgic areas?