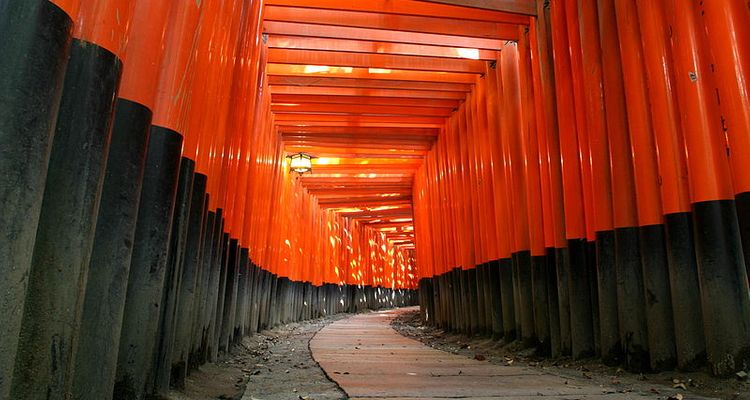 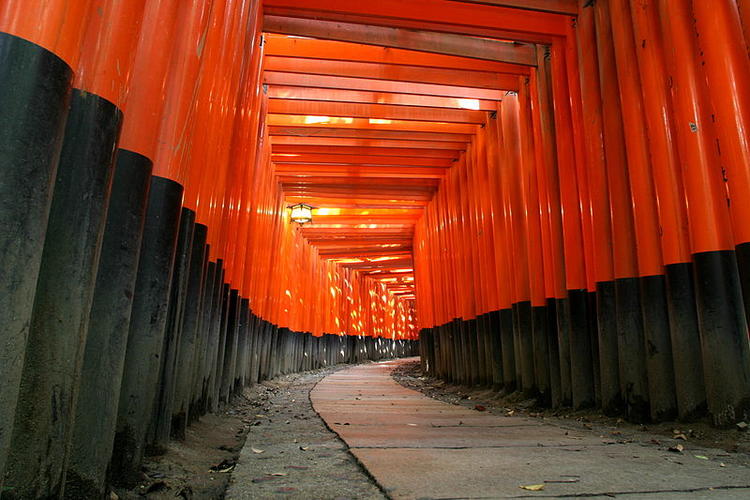 10 Must-See Temples and Shrines in Kyoto

You haven't really visited Kyoto unless you've been to these temples and shrines.

Kinkaku, or the golden pavilion, stands facing Kyoko-chi pond. The pavilion and its reflection on the water as well as islets and trees weave into a beauty and create a peaceful atmosphere. This Zen temple represents Kitayama-bunka, flamboyant culture that was a blending of traditional aristocratic culture and new samurai culture. The garden is designated as a national special historic site and a national special landscape. One of 17 World Cultural Heritage sites of Kyoto.

One of Japan's best-known temples with a structure imitated by lesser temples around the country, Kiyomizu commands an exalted spot on a steep hill with a view over Kyoto. The pathway leading to the shrine is lined with pottery and souvenir shops, and the temple grounds have open-air pavilions, where you can drink beer or eat noodles. Don't neglect a visit to the smaller Jishu Shrine on its grounds -- it's dedicated to the god of love.

Ginkakuji (銀閣寺, Silver Pavilion) is a Zen temple along Kyoto's eastern mountains (Higashiyama). In 1482, shogun Ashikaga Yoshimasa built his retirement villa on the grounds of today's temple, modeling it after Kinkakuji (Golden Pavilion), his grandfather's retirement villa at the base of Kyoto's northern mountains (Kitayama). The villa was converted into a Zen temple after Yoshimasa's death in 1490.

Heian-jingu was founded in 1895 to commemorate the 1100th anniversary of establishing Kyoto as the capital of Japan. The relatively new shrine has colorful halls and beautiful gardens. Its main halls represent 5/8 scale replicas of the first Imperial Palace built in Heian-kyo (Kyoto) in 794 and convey the atmosphere of elegance of the Heian period (794-1185).

One of the most well-known shrines among the people of Kyoto, this shrine is nicknamed "Oinari-san." Fushimi Inari Taisha Shrine is the main shrine of all the Inari Shrines in Japan, and one of the oldest Shinto shrines in Kyoto. Boasting the most visitors of all Shinto Shrines in Japan, it is particularly crowded during the New Year, as well as on the first day of each month and "uma no hi" (day of the horse under the Japanese old calendar).

This Zen temple was built in 1450 by Hosokawa Katsumoto, who had taken possession of a villa of Tokudaiji Temple. The karesansui (dry landscape) rock garden (designated as a special place of scenic beauty), which lies on the south side of the Hojo (quarters of the chief priest), is famous as "Tora-no-ko Watashi." The white sand rectangular garden, surrounded on three sides by an oil earthen wall, measures 25 meters east and west and more than 10 meters north and south.

Long connected with the Kyoto Geisha community centered in the nearby Gion District, Yasaka-jinja Shrine is a bustling, colorful and pleasant downtown shrine that lies at the heart of much of Kyoto's festive tradition.

Saihoji (西芳寺, Saihōji), more commonly known as Kokedera (苔寺), is one of Kyoto's Unesco World Heritage Sites. Entrance to this temple requires a reservation made well in advance by mail.

Kokedera means Moss Temple, referring to the temple garden's estimated 120 different varieties of moss. Visitors to the temple can walk through this spectacular garden, which has strongly influenced subsequent Japanese garden design.

Toji Temple, which dates from 794, is known for its high pagoda tower (the tallest in Japan) and for its lively flea markets on the 21st of every month (called "Kobo-san" locally). Get there very early for the best buys, which include fine textiles, ceramics and tansu furniture.

Toji Temple was founded in 794 on imperial orders from the Emperor Kammu to pray for national peace and in 823 was given to Kobo Daishi (aka Kukai), the founder of the Shingon school of Japanese Buddhism.

Byodoin Temple (平等院, Byōdōin) is a striking example of Buddhist Pure Land (Jodo) architecture. Together with its garden, the temple represents the Pure Land Paradise and was influential on later temple construction. Byodoin was initially built in 998 as a countryside retreat villa for the powerful politician Fujiwara no Michinaga, not as a temple.